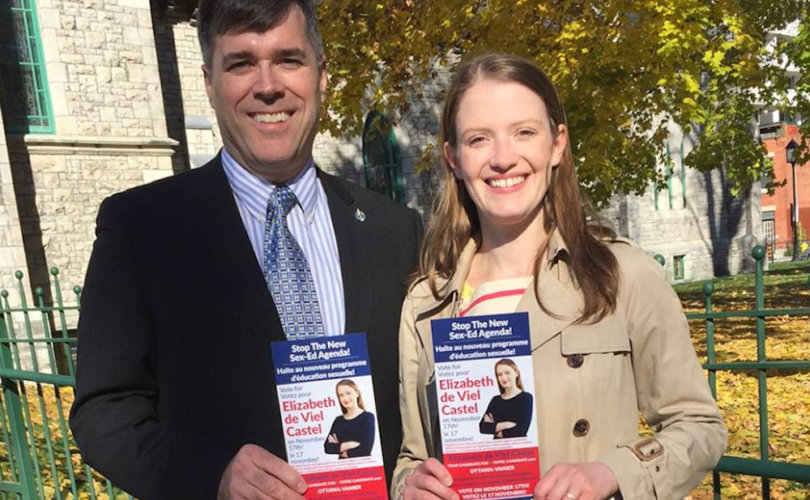 OTTAWA, November 14, 2016 (LifeSiteNews) — Campaign Life Coalition is urging supporters to vote for either of two anti-sex-ed candidates in the upcoming Ottawa-Vanier by-election and to reject Progressive Conservative candidate André Marin to send a message to the PC Party.

Marin told the Toronto Star that he agrees with what he described as leader Patrick Brown’s “fiscally conservative and socially progressive” shaping of the PC Party and that Brown “fell on the right side of the issue” in endorsing the Liberal government’s sex-ed curriculum after flip-flopping.

But if Marin “supports a curriculum that sexualizes children, nudges them toward premature sexual experimentation and makes them more vulnerable to sexual predators, then he ain’t a conservative and he doesn’t deserve votes from real conservatives,” says Jack Fonseca, senior political strategist for CLC.

De Viel Castel has also been endorsed by her father, former Conservative MP and well known social conservative Pierre Lemieux, who has declared his intention to run for the federal Conservative leadership.

“We’re sending out emails, we’re phoning and emailing our supporters asking them to volunteer to go door to door with Elizabeth or Stephanie to distribute their literature, thus putting the radical sex curriculum at the top of voters’ minds,” Fonseca told LifeSiteNews.

Campaign Life is part of a pro-parental rights umbrella group Canadian Families Alliance that has blasted the government of Premier Kathleen Wynne for not consulting parents on the updated sex-ed curriculum, which the Liberals introduced in all publicly funded schools in the fall of 2015, despite unprecedented protests.

CLC’s critique of the sex-ed curriculum is one of several that contend the program destroying children’s innocence by introducing them to sexual concepts when they are too young, and without regard to parents’ role as primary educators.

Moreover, as education minister in 2009, Wynne and deputy minister Ben Levin introduced the Equity and Inclusive Education strategy, which included an overhaul of all curricula to fit its grand scheme of advancing a pro-LGBTQ agenda in Ontario’s schools.

But the 2010 sex-ed curriculum introduced under the EIE strategy was shelved by then Premier Dalton McGuinty after parental outcry.

Brown now endorses the Wynne/Levin sex-ed curriculum, even though in an email to Fonseca during his leadership campaign Brown promised he would “repeal” the curriculum. Brown also disavowed a letter bearing his signature and stating he would “scrap the sex-ed” that was discovered circulating during a September by-election campaign in Scarborough-Rouge River.

Marin, a former Ontario Ombudsman, told the Toronto Star that he is “not too concerned about sex-ed,” and shrugged off Brown’s flip-flop on the curriculum. “In the end, he fell on the right side of the issue. What politician hasn’t changed their mind?”

But as far as CLC’s Fonseca is concerned, “If Marin wants to champion a sex program written under the direction of a convicted pedophile, he deserves to be punished at the polls.”

Ottawa-Vanier is a longtime Liberal stronghold, having been in the party’s hands since 1967, but with Wynne at the lowest popularity rates of any premier, the by-election is seen as “a prime opportunity for the PC Party to steal one from the Liberals,” Fonseca noted.

Voting for either de Viel Castel or McEvoy will split the conservative vote, and it is “about sending the message to the PC Party, that if you are going to betray parents, a price has to be paid for that,” Fonseca said.

People don’t have to live in the riding to help the candidates get their message out, Fonseca noted. “Anybody can volunteer who lives within driving distance of the riding.”

CLC encourages those who live in Ottawa-Vanier or in the three adjacent ridings to contact Elizabeth de Viel Castel to sign up for volunteering duties by emailing her at [email protected], Fonseca said.

To sign up for volunteer duties on Stephanie McEvoy’s campaign, email her at [email protected].