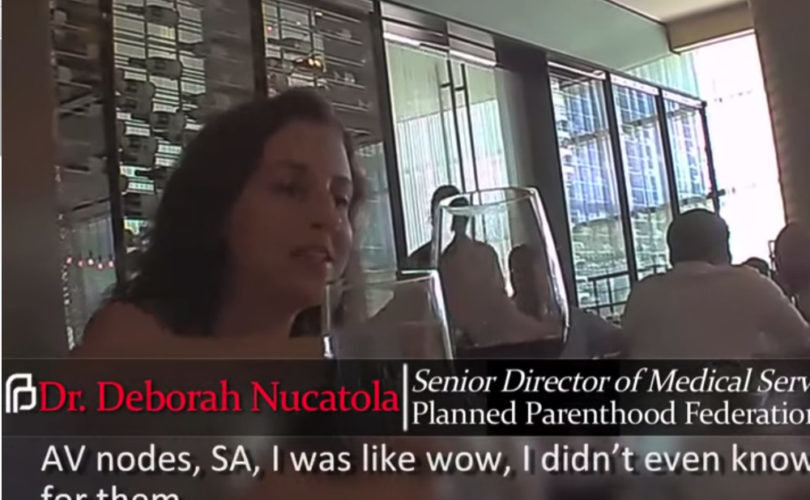 WICHITA, KS, January 5, 2016 (LifeSiteNews) – She told the ugly truth about the harvesting of aborted babies' organs and tissues. Now, one of the nation's leading pro-life organizations has given her an award for exposing the abortion industry.

Dr. Nucatola appeared in the first undercover Planned Parenthood video released by the Center for Medical Progress, casually eating salad and sipping wine as she discusses removing select organs from aborted babies for $30 to $100 a specimen.

She revealed that fetal livers are especially in demand, although “a lot of people want intact hearts these days.”

“Deborah Nucatola is the natural choice for our 2015 Veritas Award,” said Troy Newman, the president of Operation Rescue, who also serves on the board of CMP. “While other Planned Parenthood abortionists featured in the CMP videos each had their own shocking revelations, it was Deborah Nucatola's cavalier discussions about Planned Parenthood's fetal tissue harvesting that first captured America's attention and shifted the national debate on abortion. Her words did more to set back the Abortion Cartel than nearly any spoken by pro-life spokesmen.”

After having “a huddle at the beginning of the day” to review the list of body parts the biological firm desires, she alters her abortion technique, saying to herself, “I'm not gonna crush that part. I'm gonna basically crush below, I'm gonna crush above, and I'm gonna see if I can get it all intact.”

“We've been very good at getting heart, lung, liver,” she said between sips.

Unlike other investigative videos, the nation's leading abortion provider could not dismiss the footage as the words of a low-level employee Since 2009, Nucatola has served as Planned Parenthood's Senior Director of Medical Services, instructing affiliates nationwide in the medical techniques they are to employ.

She also showed a willingness to skirt the law at times, as she describes how Planned Parenthood's abortionists perform a procedure that sounds very much an illegal partial birth abortion.

“The federal abortion ban is a law, and laws are up to interpretation,” she said. “So, if I say on day one that I don't intend to do this, what ultimately happens doesn't matter.”

Backlash over the video, and the subsequent videos filmed during CMP's nearly three-year-long investigation, has spurred multiple national investigations into the abortion industry's potential violation of federal felonies.

Veritas is a Latin word meaning “truth.” The group plans to award the honor every year to an abortion supporter “whose words or actions are so powerfully truthful about the reality and barbarity of abortion that they advance the pro-life cause.”

“For abortionists, there are two ways to speak about abortion,” Newman said. “The first is the scripted, 'Orwellian' rhetoric that sanitizes abortion, which is used to influence public support. Then there is the unvarnished truth spoken in unguarded moments without public relations in mind.”

“When abortionists speak about their work candidly and truthfully, they actually prove in the most powerful ways why abortion cannot be tolerated in a civilized society,” he said.

Congressman: Give us Nucatola or we’ll subpoena