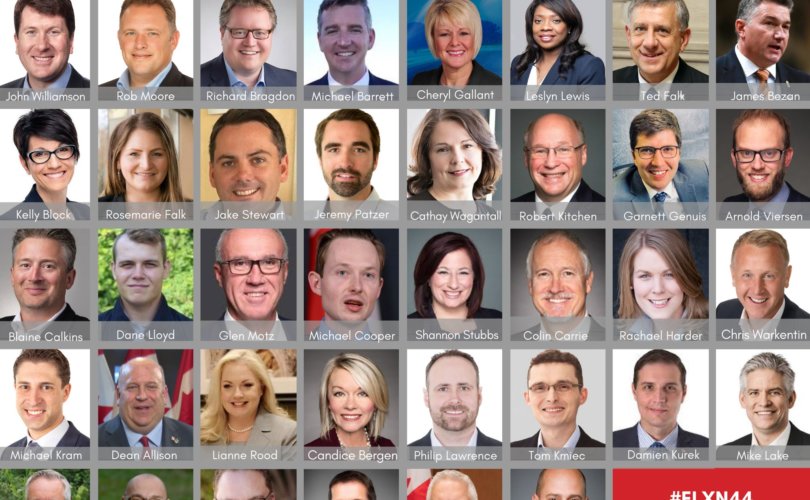 (LifeSiteNews) – A Canadian pro-life group congratulated 38 candidates with “green-light” ratings for winning their respective ridings in the 2021 federal election.

“We trust they will work together in ending the greatest injustice faced by the most vulnerable group. #prolife #elxn44,” Campaign Life Coalition (CLC) posted on social media.

The pro-life MPs elected Monday night all had a solid “green light” rating from CLC’s voter guide, which endorsed 137 pro-life candidates in 115 ridings from four parties and independents.

The 38 fully “green light” MPs are all from the Conservative Party of Canada (CPC).

The newly elected members of Canada’s parliament face an uphill battle from both CPC members who are openly pro-abortion, including party leader Erin O’Toole.

O’Toole ran a campaign on left-leaning views and won only 119 seats, which is two less than in the 2019 election.

Despite their being only 38 “green light” candidates, many other CPC MPs elected have voted for life and family in the past, but fall short of being fully “endorsable.”

Lewis has a strong showing in the 2020 CPC leadership race, garnering 25 percent of the vote. She came in first place in Saskatchewan in the first round, then fell off the ranked ballot on the second round, despite having more votes than O’Toole.

Despite this, CLC private donors, supporters, or stakeholders were able to view and access the voter guide if they set up an account as an “official subscriber.”

O’Toole won the party leadership race in 2020 after beating out Peter MacKay. He claimed at the time that he won as “pro-choice” candidate.

In an opinion piece published in the Globe and Mail yesterday, Gary Mason wrote that the CPC’s poor election results will mean an “internal fight” for O’Toole, “one that could get very loud and very messy and has the potential to lead to a complete fracture of the conservative movement.”

“It was never much of a secret that there were many Conservatives who saw Mr. O’Toole’s shift to the left as a rebuke of Stephen Harper,” Mason wrote.

“The former prime minister’s deputy chief of staff, Jenni Byrne, was quite public in her disdain for some of Mr. O’Toole’s policy shifts, especially around climate change.”

Mason wrote that O’Toole’s shift left “did not sit well with many in the base, especially social conservatives who did not like Mr. O’Toole’s enthusiastic embrace of everything LGBTQ and his unequivocal pro-choice position on abortion.”

Mason then highlighted CLC’s official statement on the election, which directly called out O’Toole’s shift to the left.

“The Conservatives would’ve done much better if O’Toole had not alienated the party’s socially conservative base with his shameless support for abortion, LGBT ideology, oppressive lockdowns, and liberty-destroying vaccine passports,” said Jack Fonseca, CLC’s director of political operations.

“By insulting the base, O’Toole drove CPC voters into the waiting arms of Maxime Bernier. He caused many others to stay home on election day, leaving them deflated and despondent about the political process.”

In O’Toole’s concession speech Monday night, he said he’s not looking at changing course on his vision for the party.