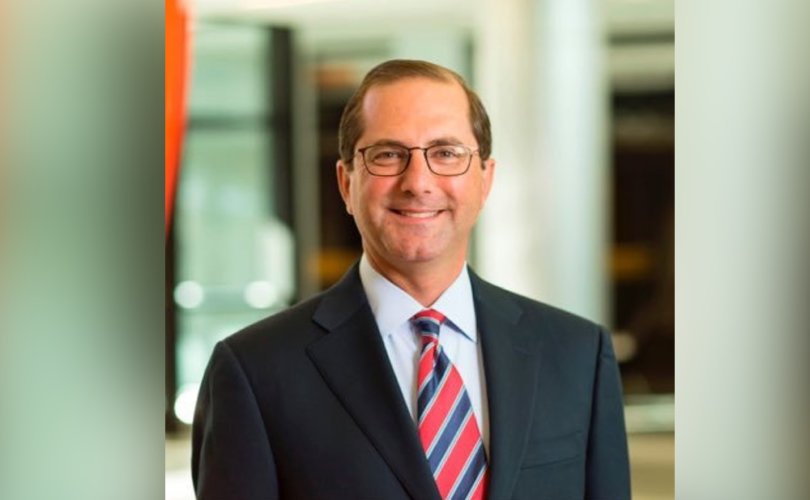 Azar “takes the reins at a time when major pro-life policy initiatives are being rolled out at this crucial department,” said Marjorie Dannenfelser, President of the Susan B. Anthony List.

“Azar’s commitment to HHS’ mission ‘to enhance the health and well-being of all Americans,’ including unborn children and their mothers, is so encouraging,” she continued. “We are confident that he has the experience and enthusiasm to lead the way in implementing President Trump’s pro-life priorities.”

Azar is a former clerk for Supreme Court Justice Antonin Scalia. His predecessor, Tom Price, was strongly pro-life and pro-freedom. Price resigned in September 2017 after facing backlash for travelling on government-funded private jets.

The Senate approved Azar 55-43. Six Democrats joined Republicans in approving him. They were Joe Donnelly of Indiana, Heidi Heitkamp of North Dakota, Joe Manchin of West Virginia, and Doug Jones of Alabama––all from red states––and Tom Carper and Chris Coons of Delaware, both from Delaware.

Azar is a former executive with pharmaceutical giant Eli Lilly and Company and previously served as general counsel and then deputy HHS secretary under President George W. Bush. This indicates he is familiar with both the sprawling agency and navigating D.C. politics.

As HHS head, Azar will oversee the Food and Drug Administration, Medicare, and Medicaid. Earlier this month, he told the Senate Finance Committee that dealing with high drug prices would be a priority.

Azar’s confirmation comes at the end of a thrilling week for pro-life America. Two days before, President Trump declared January 22 to be “National Sanctity of Human Life Day,” co-opting the anniversary of the Supreme Court’s infamous Roe v. Wade decision.  His proclamation began, “Today, we focus our attention on the love and protection each person, born and unborn, deserves regardless of disability, gender, appearance, or ethnicity.”

On the previous Friday, in an unprecedented move, both President Trump and Vice President Mike Pence addressed the huge crowd gathered on the National Mall for the annual March for Life via live stream from the White House, just a few blocks away.

“Under my administration, we will always defend the very first right in the Declaration of Independence, and that is the right to life,” the president told cheering crowds of hundreds of thousands that packed the Mall grounds between the Washington Monument and the U.S. Capitol.

Last week, the Department of Health and Human Services also announced the rescission of an Obama-era letter that forbade states from redirecting state Medicaid funds away from abortion businesses like Planned Parenthood, as well as a proposal to strengthen enforcement of federal conscience and religious freedom protections for Americans who do not want to be forced to participate in abortion.

As HHS Secretary, Azar will oversee an agency with 80,000 employees and a more than $1 trillion budget––the largest of any government agency, representing about 28 percent of all federal spending.