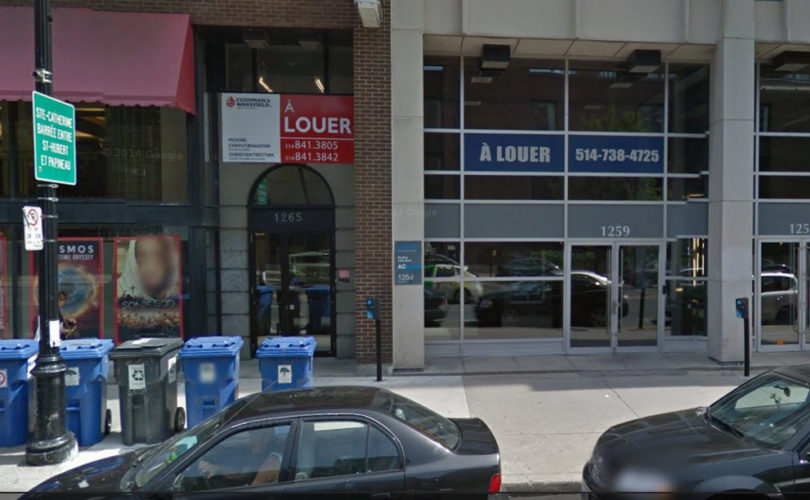 MONTREAL, February 20, 2015 (LifeSiteNews.com) – Montreal’s Morgentaler clinic has moved to a downtown location and needs a new injunction to keep pro-life street counselors at bay. But after 25 years across the street, Campagne Quebec-Vie plans to fight.

The court fight was provoked when the clinic moved from its original location last year, leaving the protection of the old, “temporary,” site-specific injunction behind. CQV volunteers and sidewalk counselors responded by showing up at the doorstep of the new location and talking to customers of both the Morgentaler clinic and another abortion facility in the building. The operators have already secured a provisional injunction but are set to argue for a so-called temporary interlocutory order –which can last as long as it goes unchallenged.

In their affidavit, the abortion facility claim the “rights and freedoms” of their staff and clients “are compromised by the actions of the defendants and their sympathizers.” They charge CQV with exploiting “the relocation of the Morgentaler Clinic to another area of the city of Montreal by not respecting the spirit of the first ordinance thus causing injury to the Plaintiffs and the patients and staff of the Morgentaler Clinic and Femina clinic.”

But CQV’s Georges Buscemi says the organization wants to claim the “social facts” in Canada have changed to the extent there should no longer be a “bubble zone” to keep away pro-life volunteers.

The Supreme Court of Canada recently justified legalizing assisted suicide in the Carter decision—and reversing an earlier ruling—on the grounds the “social facts” in Canada had changed. Now Campagne Quebec-Vie is seeking funding from pro-lifers in Canada and the U.S. to refight the legal battle it lost a quarter century ago.

“We expect them to argue again that they need the bubble zone to protect the privacy and security of the clients,” Buscemi told LifeSiteNews. “But since the early nineties a lot of research evidence has come out showing the dangers to the health of the women that abortion causes. So we are arguing that the well-being of the women is at stake—that they are, in fact, better off the closer we are to the clinic, so that they can read our signs and be handed our material.”

But CQV argues its members will not be protesting but praying and offering information about the physical and mental harm done many women by their abortion. “They are trained sidewalk counselors, in post-abortive counseling too; it’s an actual ministry,” said Buscemi. But even though this could not be described as protest, “we expect there to be counter-protesters who will try to provoke our people. Then they can show video and say, ‘Look at all the chaos—that’s why we need an injunction.’”

Neither the Morgentaler staff nor their lawyer was willing to talk with LifeSiteNews.

Buscemi said that the abortion clinics have always argued they were protecting their clients. Now “we can argue that their well-being is better served by having us close by. We have serious things to say to them about their health that we can’t do from across the street. Our being there is a plus value!”

CQV is getting expert support from Dr. Philip Ney of Sooke, British Columbia. A world-renowned post-abortive counselor and research, he described to LifeSiteNews his own studies into abortion’s impact. “The women have real difficulty in bonding to their next child. Statistically there is a greater incidence of child abuse by mothers who have had abortions. And children who were considered for abortion, and siblings of aborted children suffer from existential guilt like survivor’s guilt.”

In general, Dr. Ney added, “There has been a huge leap in evidence about the psychological and physical harm abortions do to women. The medical staff inside the clinic have a duty—the whole medical profession has the same duty—to warn the women of these harmful effects.” The fact that they do not warn them only shows, as far as Dr. Ney is concerned, “that they don’t give a dang about the health of the women.”

But pro-life volunteers at the abortion clinic also have a duty to warn the women, said Dr. Ney. “Abortion is of absolutely no benefit to the health of women, but what these volunteers are doing is an immense benefit.”

Campagne Quebec-Vie is appealing for financial support to fight the injunction in court. Supporters can donate here.