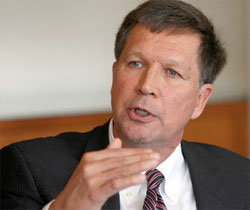 CLEVELAND, Ohio, August 6, 2015 (LifeSiteNews) – Protests from various liberal groups are expected outside Cleveland's Quicken Loans arena during the Republican presidential debate tonight. But one pro-life supporter is organizing a protest of one of the GOP candidates – Ohio Governor John Kasich.

“If you were pro-life, would you let a stadium full of children die?” the pro-life group Faith2Action website is asking. “Ironically, the Presidential Debate is being held at the Quicken Loans Arena which holds just over 20,000 people–the same amount of human beings the Heartbeat Bill will protect each year in Ohio if only Governor John Kasich would call for it–instead of working against it.”

The bill behind the beef with Governor Kasich is Ohio's Heartbeat Bill, which passed the Ohio House in March after two previous tries since 2011.

It still faces opposition in the Ohio Senate, according to Cincinnatti.com, and from Kasich, who said earlier in the week the bill passed, “I share the concerns of Right to Life about this bill and about potential litigation.”

The Heartbeat Bill would ban abortions after the detection of the first fetal heartbeat – as early as six weeks into a pregnancy. It requires the abortionist to check for a fetal heartbeat with standard medical equipment and also to tell the mother if her baby has a heartbeat.

Currently in Ohio, abortion is legal through 24 weeks, except in cases of danger to the mother's life or major bodily functions. Pregnancies between 20 and 24 weeks require a doctor to determine whether the unborn child is viable before agreeing to perform an abortion.

Ohio Right to Life president Mike Gonidakis said last fall that the Heartbeat Bill was unconstitutional, according to ideastream.com, and tweeted in March, “Heartbeat bill is unwise.”

A similar bill in North Dakota was just struck down by a Republican-dominated federal appeals court.

Faith2Action founder and president Janet Porter is calling for area pro-life supporters to “[l]et the world know John Kasich isn't as pro-life as he's been telling everyone” at the Cleveland debate.

“Tonight at the presidential debate you may hear some nice pro-life rhetoric,” Porter said in a statement. “But, outside the arena where the debate is being held, signs such as, 'Pro-life Ohioans against John Kasich' will be displayed.”

She also suggested the sign slogans such as “Shame on Kasich #Heartbeat Bill,” and “Kasich Heartless on Heartbeat Bill.”

Porter pointed out as well that the debate will offer the perfect chance to expose Kasich's opposition to the bill.

“Let them know the game of pretend is over,” she said. “Those lives would be protected if only John Kasich would call for passage of the Heartbeat Bill instead of working against it.”