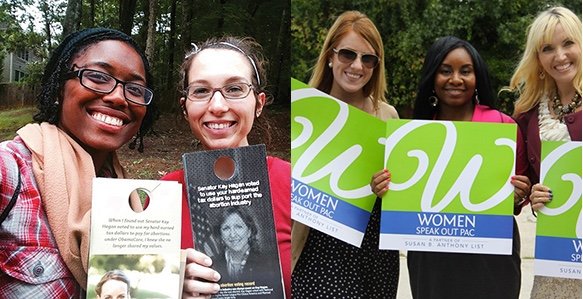 October 31, 2016 (LifeSiteNews)–The pro-life Susan B. Anthony List has spent just under half of Planned Parenthood’s election budget but has knocked on the doors of twice as many voters.

SBA List and its partner super PAC Women Speak Out announced Monday that through more than 700 pro-life activists they deployed to canvass in battleground states, they have knocked on the doors of more than one million people. These door-knockers have been targeting pro-life voters in the battleground states of Florida, North Carolina, Ohio, and Missouri.

“Early on we identified Florida, North Carolina, and Ohio as battleground states where we could leverage our resources to defeat Hillary Clinton and pro-abortion Senate candidates who would rubber-stamp her agenda,” Dannenfelser continued. “We are talking directly to pro-life voters who, without information on the pro-life positions of candidates, may not vote or vote for the pro-abortion candidates.”

Meanwhile, Planned Parenthood is investing $30 million to elect pro-abortion candidates but has only knocked on half a million doors, a new memo from the abortion business revealed. It has 1,500 paid staffers and 3,500 volunteers. This is Planned Parenthood’s largest get-out-the-vote effort in its history. It is working to elect Hillary Clinton and targeting Senate races in New Hampshire, Pennsylvania, North Carolina, and Nevada.

SBA List also launched a six-figure online ad designed to reach 550,000 pro-life, low propensity voters multiple times online. It highlights the story of a boy named Micah, who was prematurely born at 22 weeks and four days and is alive, healthy, and happy today.

“For somebody to say that a baby at 20 weeks doesn’t have the right to live, I want to tell them to come and see Micah,” his mother, Danielle Pickering, says. “If you’re considering supporting politicians that are advocating for late-term abortion, take a look at my son.”