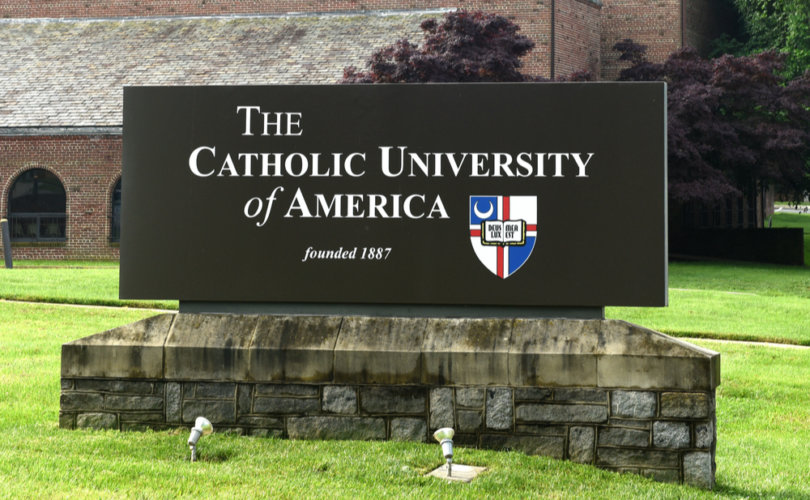 Cardinals for Life originally asked the Treasury Board, part of the student government, for $550 to buy donuts for students who joined them for weekly sidewalk prayer outside of abortion facilities. The money would have covered purchases for the semester.

The amount was later lowered as part of a compromise between student government representatives. Even that ended up getting rejected and the group ended up with no money.

Nick Swanson, the president of the pro-life group, shared with LifeSiteNews why it is important that his group receive support. “We’ve raised a lot of money so far and it’s going to go to support our mission,” Swanson said.

Here they are! The awesome contingent of ⁦@CatholicUniv⁩ students involved with CUA Cardinals for Life who came to pray outside the DC Planned Parenthood on Saturday.#ProLife pic.twitter.com/JKQcc6Ydp6

He said over 85 people came to the sidewalk prayer outside of a local Planned Parenthood.

“What happened to us is not a statement against Catholic University, it’s a wonderful school, what happened is unfortunate,” Swanson said.

“We’ve gotten a lot of support from our members,” he added, saying he and his organization have been getting texts and personal comments of support from students, parents, and alumni.

Through several appeals, members of the student activist board suggested $156 for Cardinals for Life, but the full student government voted down even that amount.

Swanson wrote an opinion piece for the campus paper The Tower on November 5, providing more details.

“Twice this year, Cardinals for Life has presented to the Treasury Board — the branch of student government responsible for allocating the Student Activity Fee, which is a pool of student tuition money used to fund extracurricular events for all student organizations,” Swanson wrote.

“We requested funding to provide free donuts to those who attend Sidewalk Prayer,” Swanson said. “Our hope was that we could use this time after we finish praying to create community within our club and process our experience praying.”

He said the Treasury Board has allocated money for free food at events before. “The donuts were not an end in themselves but a means to creating community within our club and surrounding the Sidewalk Prayer event specifically.”

He accused the Board of “bias” against his group and said the denials were “misguided” and “confusing.”

“For example, they claimed that we should have to pay for ourselves because we had done so in the past,” Swanson said. “They demonstrated a clear bias against our event when compared to the money they have given to many other events on campus. No student organization is held to these same strict scrutiny standards the Treasury Board used against us.”

The entire Treasury Board showed up to the next student senate session, Swanson said, and lobbied against giving money to the pro-life student group.

He took aim at the “hostility” his group faced.

The denial of funds “lacks common sense, respect, temperance, prudence, and professionalism,” Swanson said. “The Treasury Board demonstrated a level of hostility against Cardinals for Life that I believe compromises their ability to fairly allocate funds to us in the future.”

Ten student senators voted in favor of giving money to the pro-life group while fourteen voted against it,” according to the Tower.

One Treasury Board member implied that rejecting its suggestion to deny money would be hostile toward women and minorities.

“Treasury Board is already the most diverse branch of SGA in many ways and as a woman of color and a minority she can attest to that and voting for this would silence this voice,” Isa Salazar said, according to a paraphrase of her comments in the minutes for the November 1 meeting. “She encourages the Senate to uphold the decision of Treasury Board with all students in mind.”

The minutes contain further debate on the issue.

The student government did not respond to an emailed request for comment on Thursday.

One ally on the student government is Gerald Sharpe, last year’s Student Government Association President and a current senator. He also served as a senator as a freshman and sophomore.

He is the President Pro Tempore of the senate, which means he hears appeals of Treasury Board decisions along with four other people. Three of those four people agreed to the $156 compromise and then changed their mind, without telling Sharpe.

He said there should be an apology from the Treasury Board members and the senators who voted against the measure.

Sharpe has been trying to work with student government members and has been working to fundraise money for Cardinals for Life. The group has been using its @CardinalsForLife Venmo account to raise money.

He said it’s “important” for the group to be able to meet in fellowship after sidewalk counseling. It’s important that members get to know one another and hear about future opportunities, Sharpe said about why the donuts are important.

“What needs to happen is accountability internally,” Sharpe said. He said many people acted “unprofessionally.”

There must be amends made between Cardinals for Life and student government, Sharpe said.