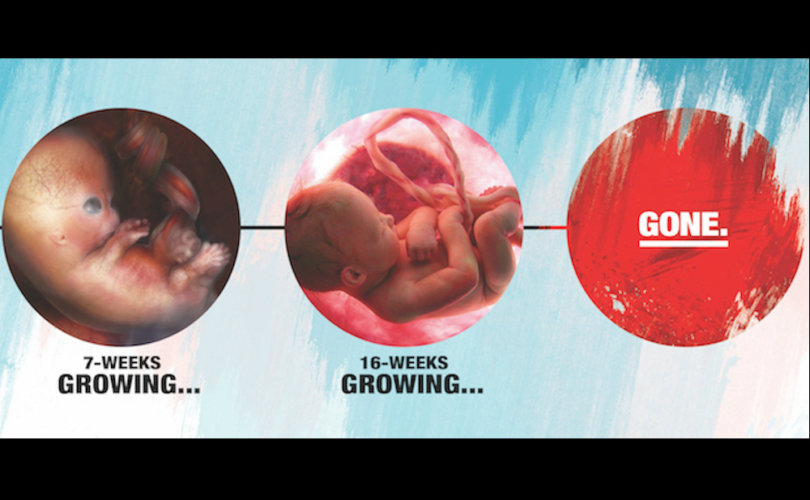 GRANDE PRAIRIE, Alberta, June 24, 2016 (LifeSiteNews) – The Canadian Centre for Bio-Ethical Reform has asked Alberta’s Court of Queen’s Bench to nullify the City of Grande Prairie’s ban of a strongly-worded pro-life advertisement from its bus fleet.

The ad, submitted by CCBR in January 2015, carried pictures depicting the loss of life through abortion:

“The City of Grande Prairie violated our charter rights,” said CCBR legal co-ordinator Nicholas McLeod. “Talking about the killing of pre-born children does  not mean that our rights disappear.”

The City at first refused the ad on the ground that its contents would be “disturbing to people within our community” but later claimed that the ad would violate its contract with a private advertising firm requiring all material to “comply with the Advertising Standards Council of the Canadian Advertising Advisory Board.”

In court this week, however, the northern Alberta city’s lawyers argued that the ad constituted “hate propaganda.” Stated the city’s brief: “The ad with its graphic images and strong language effectively equates women who have had abortions with murderers. Such a pointed accusation is not only legally incorrect, it exposes such women to hatred.”

Further into the brief, the city goes further, contending the ad was not intended, as CCBR contended, to educate the public about abortion but “was actually designed to promote hatred against an identifiable class.” The city called the CCBR’s position, based on the use of words such as “slaughter” and “evil” on its website, an “extreme religious” viewpoint.

In its defence the city insisted it had weighed the importance of free speech sufficiently before deciding to limit it in the public interest, as the Charter allows it to do.

Rather than debating the content, CCBR argued in court that municipal governments simply had no business making decisions on content at all.

Explained CCBR counsel Carol Crosson, “Municipalities have not been granted the right under law to censor speech, plain and simple. When a city opens the door for advertising, it must let everyone go through that door, on an equal basis. It cannot discriminate on the basis of content.”

She told LifeSiteNews that the Canadian Constitution reserves it to the federal government, through the Criminal Code, to determine whether content promotes hatred. Municipalities can restrict advertising for aesthetic reasons, or to ensure proper visibility along roadways, or ban it entirely under powers assigned to them and the provincial governments by the constitution, but they cannot pick and choose content, said Crosson.

CCBR is also arguing that Grande Prairie, by changing its reasons for rejecting the ad three times, and by developing a new content policy in the middle of litigation, denied the public’s right to be free of “arbitrary, unreasonable and capricious decisionmaking.”

The Supreme Court of Canada decided in the 2009 Greater Vancouver Transportation Authority case that the city could not exclude political content.

CCBR won a settlement from the Ontario city of Peterborough this February for a similar bus ban the city has since lifted. CCBR has won other court battles over bus ads in Hamilton, Sarnia, St. John's, and Fredericton.