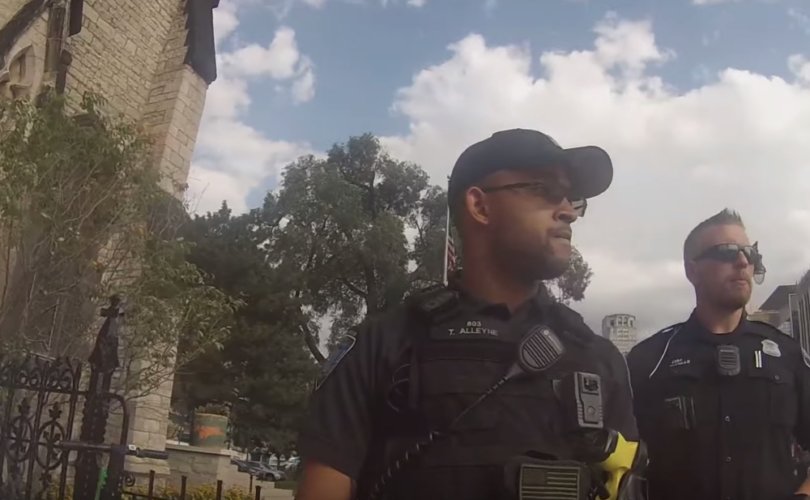 September 18, 2019 – Today, the American Freedom Law Center (AFLC) filed a federal civil rights lawsuit against the City of Detroit and several City police officers for prohibiting Created Equal from engaging in protected free speech activities during the Democratic presidential candidate debates held in July at the Fox Theatre in Detroit.

The lawsuit was filed in the U.S. District Court for the Eastern District of Michigan on behalf of Created Equal and its Founder Mark Harrington.

Created Equal is a national anti-abortion organization that focuses on training students to be preborn defenders by using a traveling photo exhibit to show as many students as possible what abortion does to preborn children. Placing abortion in the broader context of human equality, the project attempts to create debate on campus to influence America’s future decision-makers and leaders.

The complaint alleges that the City and several of its police officers violated the pro-lifers’ fundamental rights protected by the First, Fourth, and Fourteenth Amendments to the U.S. Constitution.

More specifically, during the two days of the debates – July 30 and 31 – the City imposed draconian restrictions that prevented anyone with a message that conflicted with the positions of the candidates, particularly their support of radical pro-abortion policies, from reaching the debate participants and attendees.

From the moment we arrived, Detroit Police harassed and mistreated us. We were silenced by police several times over the course of the two days for attempting to express our free speech rights. At one point, we attempted to get as close to the Fox Theatre as possible without breaching the City’s overbroad ‘restricted area’ by crossing a church parking lot that was being used by multiple media outlets and other protestors. For that, I was handcuffed and detained.

The right to freedom of speech enshrined in the First Amendment is not a right to catharsis. It is a right to meaningfully express one’s message in order to influence public opinion and to affect public policy.  Not surprisingly, the liberal City of Detroit imposed restrictions that had the intended effect of sanitizing and cleansing the areas immediately in front of and adjacent to the Fox Theatre of any messages that were critical of the Democrat presidential candidates and the positions and policies they supported. In particular, these restrictions ensured that our clients’ message, specifically including their pro-life signs, would be hidden from the CNN camera shots, the viewers of the debates, the candidates, and those who attended the Fox Theatre for the debates. Our Constitution does not permit such treatment.

The City’s unlawful speech restrictions ensured that Created Equal’s powerful message was so far away from the Fox Theatre that the message was hidden from the view of the candidates, the debate attendees, and the media coverage of the debate.

The next presidential debate will be held in Columbus, Ohio, where Created Equal is headquartered. The group says it plans to be there.