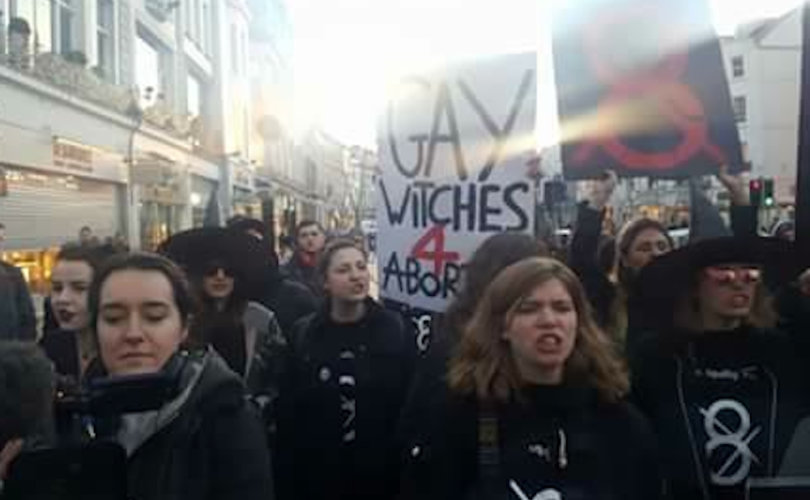 'Witches4Abortion' march in Ireland to support attempts to appeal the country's Eighth Amendment.Facebook

DUBLIN, Ireland, March 8, 2017 (LifeSiteNews) — A pro-abortion bus tour of Ireland this week to hand out abortifacient drugs without a doctor’s supervision was supported by self-proclaimed “Gay Witches” and challenged with pictorial truths by pro-lifers.

The three-day, multi-city tour that ended Wednesday sought to drum up support for repeal of Ireland's Eighth Amendment, which prohibits abortion except to save a mother’s life.

The “Bus4Repeal” was sponsored by the Reproductive Rights against Oppression, Sexism and Austerity (ROSA), which originally vowed to hand out the abortion drugs Mifepristone (RU486) and Misoprostol to women asking for them.

In response, the Irish Center for Bio-Ethical Reform (ICBR) followed the abortion bus tour with its own “#ExposingDeception Tour” displaying the pictorial reality of abortion.

“ICBR intends on following the ROSA abortion bus to every community they visit to ensure that vulnerable women are told the whole truth about the dangers of abortion,” spokeswoman Aisling Hubert explained before the tour. “We will expose the graphic reality of abortion using large banners that show the broken bodies of pre-born children dismembered through abortion.”

Hubert says “countless” women have changed their minds and given life when they are shown what abortion really is.

“Many post-abortive women have told us they would never have aborted had someone shown them that truth before instead of after they aborted,” she added.

“The whole ROSA bus thing is a total stunt, as the pro-aborts have now admitted they won’t be actually giving out abortion pills,” Niamh Ui Bhriain of Dublin's Life Institute told LifeSiteNews via email. “The pro-life bus trailing them like this (with real pictures of abortion) is ruining their media narrative.”

The ROSA pro-abortion tour claims that RU486 is “as safe as aspirin,” but Dublin's Life Institute points to medical experts, including former Master of the Rotunda Hospital Dr. Sam Coulter Smith, who say “taking abortion pills in an unsupervised setting could kill women.”

“These people are acting like drug pushers,” Bhriain said, adding that “if they are, in fact, distributing pills to kill babies and endanger women's lives they should be arrested.”

The 'Bus 4 Repeal' began its pro-abortion tour at the University College Dublin and visited cities and colleges in Waterford, Cork, Limerick, Kildare and Galway.

In displaying medical pictures of aborted babies, the Center for Bio-Ethical Reform (CBR) seeks to show the truth of what abortion does.

“By standing opposite the (abortion) bus we are holding up a mirror to what is happening inside their bus,” one press release said. “They are simply the visual facts.”

“Abortion can only be properly understood once it is seen,” CBR director Jean-Simonis Engela said. “If we find abortion photos so distressing, why would we tolerate abortion practice in Ireland? In other words, if showing this is way too awful, then why would we make it lawful?”

“If it’s too horrifying to visualize, then it’s too depraved to legalize.”