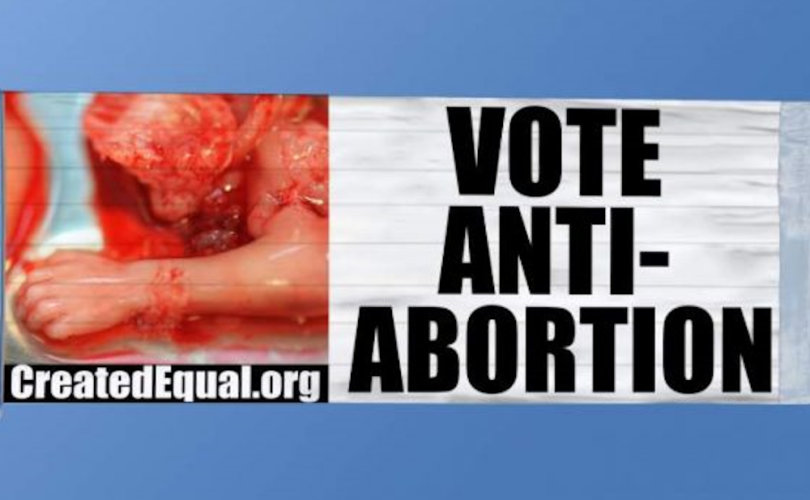 CLEVELAND, Ohio, October 25, 2016 (LifeSiteNews) — As tens of thousands of baseball fans gather to watch the Chicago Cubs and Cleveland Indians face off in Game 1 of the World Series on Tuesday night, they will see the face of a person killed by today’s greatest human rights atrocity: abortion.

Created Equal’s new Vote Anti-Abortion initiative is flying a giant banner of an abortion victim over Progressive Field and nearby Quicken Loans Arena, where the defending NBA champion Cleveland Cavaliers open their season on Tuesday night against the New York Knicks. The group says it could reach around 100,000 people in the vicinity

Roughly 2,900 young human beings are aborted each day in the United States. The United States is one of only seven countries that allows elective abortions after 20 weeks, halfway through pregnancy.

A new study has demonstrated that showing photos of abortion victims changes people’s minds about the issue rather than turning them off to the pro-life message.

“We are a visual culture. Americans must see abortion in order to reject abortion,” Created Equal director Mark Harrington told The Stream.

Recently, Democratic presidential candidate Hillary Clinton defended partial-birth and late-term abortion in her final debate against Donald Trump. Trump pointed out that Clinton’s position is that it’s OK to “rip the baby out of the womb” up until the day before birth.