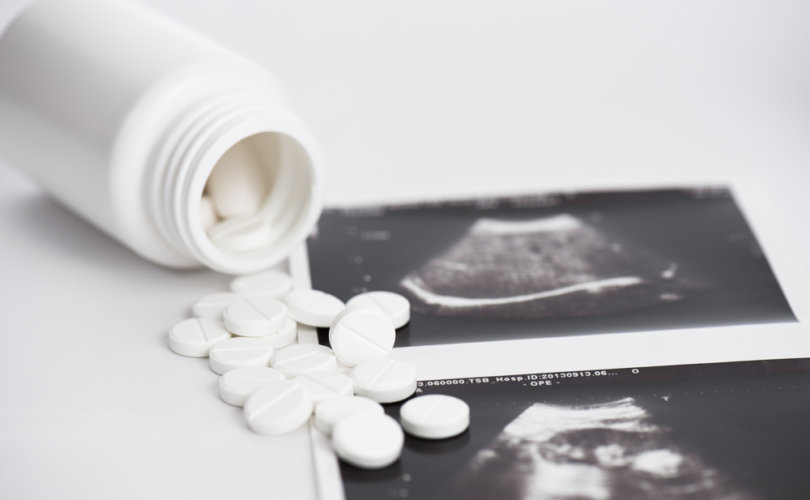 SCOTLAND, December 18, 2017 (SPUC Scotland) – Scotland’s top doctor has been given a deadline of less than three weeks to drop plans to allow DIY at home abortions or be taken to court accused of approving “unlawful” practice.

Details of the challenge are contained in a letter sent from lawyers for the Society for the Protection of Unborn Children (Scotland), the world’s oldest pro-life group, which plans to mount a Judicial Review of the proposals outlined in October by the country’s chief medical officer Dr. Catherine Calderwood, with the backing of the SNP Government.

SPUC unveiled its court action aims at the weekend (Sun Dec. 16) after confirming it had received a detailed legal opinion commissioned from a senior advocate which states they “have good prospects of success” if they take the authorities to court.

The plan was to send women from abortion clinics equipped with the drug Misoprostol, which they will be able to take in their own house, resulting in a termination.

The scheme was given approval in October.

But SPUC has expressed deep concerns for the possible adverse impacts of the at home policy on the health of women.

They also state the 1967 Abortion Act lays down specific rules for approved places where procedures can take place and their legal advice states that the law “was not intended to allow abortions to take place at home.”

In addition, their legal advice says a woman who takes such an abortifacient (abortion causing) drug at home “is not consistent” with the Abortion Act which demands the presence of medical, nursing or clinical staff.

The letter to Dr. Calderwood states:

“We are of the view that the Regulations are unlawful and effectively act to remove the current stringent medical oversight from the process, thereby endangering the lives of women. “We consider that the Regulations are unlawful in that approval of a pregnant woman’s home as a class of place where treatment to terminate pregnancy may take place is too broad a class, thereby not properly constituting a permissible class.

“Secondly, we take the view that the taking of Misoprostol at home outwith the presence of a medical practitioner or other member of clinical staff is not consistent with Section 1 of the Abortion Act 1967.

“It would appear to us that the Regulations proceed upon a misdirection as to the requirements of the 1967 Act and are accordingly unlawful.

“We are writing to you to put you on notice that it is our intention to formally challenge the Regulations should they not be withdrawn within 14 days of the date of this letter.

“Given the Christmas holidays, we will extend this time limit to Friday, 5 January 2018.

“Should we not hear from you by 12 noon that day confirming that you will formally withdraw the Regulations, then we will proceed to raise an action challenging the Regulations without further notice.”

“This is an alarming development for our country and is deeply worrying.  I have already said that the government scheme amounts to authorising backstreet abortions. And that is not being alarmist it is a simple fact. The potential health risks for mothers and their babies are horrific.

“There would be no medical oversight and this development will result in dreadful threats to women’s health.”

The legal opinion drawn up for SPUC by an advocate states that approvals for at home DIY abortions would be “unlawful.”

The opinion goes on:

“As the approval anticipates the patient administering the drug to herself without medical supervision, that approval proceeds upon a misdirection as to the requirements of the 1967 Act, and is accordingly unlawful.”

The advocate continues: “In my opinion, the approval signed on 26 October 2017 is vulnerable to challenge … I think the arguments against the validity of the approval have good prospects of success.”

The advocate states that the appropriate way of challenging the DIY abortion scheme would be by a legal action to the Scottish Government through the courts in the form of a Judicial Review.

Mr. Deighan said: “Many vulnerable women who may be desperate about the situation they are in, will be pushed towards what is seen as the easy option of being handed some drugs and sent home to stop being a problem for society.”

A recent SPUC study to mark the 50th anniversary of abortion legislation revealed the “horrific” impact of abortion on the health of women including a catalogue of physical and mental problems linked to terminations.

Research on the impact of abortion has uncovered alarming concerns about women’s health at a time when around 550 abortions take place each day in the UK and the number of abortions carried out since 1968 is fast approaching 9 million.

The “Abortion and Women’s Health” study was carried out by Dr. Gregory Pike, a medical researcher and the Founding Director of the Adelaide Centre for Bioethics and Culture, on behalf of SPUC, the world’s oldest and largest pro-life group which was founded in 1967.

Mr. Deighan said: “This report adds a significant dimension to the abortion debate. There are 27 pages and each offers a deeply disturbing insight into the impact abortion has on women.

“The litany is almost endless, ranging from increased risk of death, including by suicide, among women who undergo abortions to increased psychological harm for women who terminate because of foetal anomaly and the links between abortion and depression, anxiety, and post traumatic stress disorder.”

Mr. Deighan added: “Our abortion laws have corrupted and hardened the hearts of many health professionals working in this area and the political voices that give them encouragement.

“There is always a better choice than abortion for women facing unwanted pregnancy, with the proper care and support they will be able to support their child.”

Under the proposals women would be given the drug misoprostol, which causes the uterus to expel its contents, 24–48 hours after taking the drug mifepristone, which ends the pregnancy, at a clinic.

At present, women are required to make two separate visits to a clinic. While both drugs can be taken simultaneously, the procedure is considered to be less effective.

The abortion lobby claim it would be more convenient for women to make just one clinic trip.

Mr Deighan said: “It is tragic that many with a vested interest in pushing abortion as a service to women have made the issue a political and cultural football rather than an issue that is dealt with in the serious and detached manner that it deserves. We cannot force politicians or the government to do the right thing and it is with great regret that I note that in this latest initiative they have shown a disregard for human life, a disregard for the health of women and a disregard for the proper use of taxpayers’ money.

“I can only urge the people of our society not to be taken in by this false compassion, this quick fix which pays no attention to the long-term consequences for women and their families.

“Do not be taken in and do not take these dangerous drugs if offered them by anyone. They are not fit to be deemed part of healthcare.”