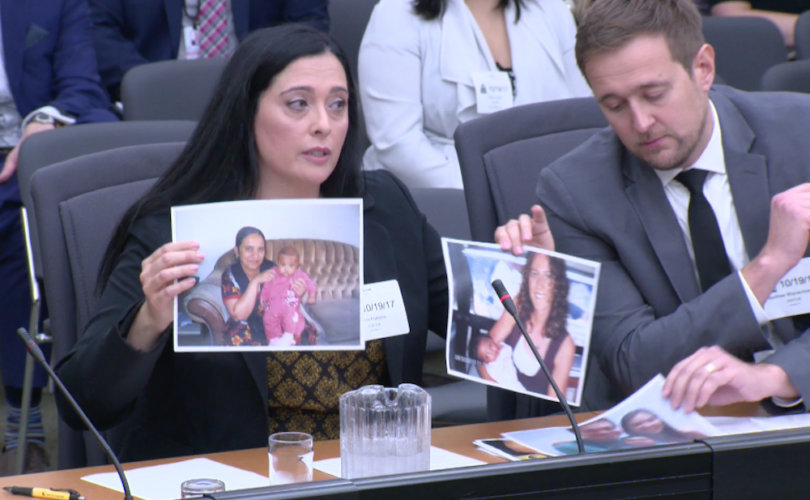 TORONTO, October 20, 2017 (LifeSiteNews) — Pro-life groups blasted a Liberal law that criminalizes pro-life witness outside Ontario abortion centers as anti-woman, repressive, and a breach of Charter rights during the one day of public hearings on the bill.

“This bill is a direct attack on the freedom of speech, assembly and expression of Canadians. This bill prevents women from having access to alternatives to abortion,” Campaign Life Coalition’s Matt Wojciechowski told the standing committee on general government Thursday.

“It is a problem made up by the abortion industry and their allies at Planned Parenthood to demonize their opposition and to protect their grisly business of killing children before birth for profit,” he said.

“If you enact this law, you essentially eliminate access and awareness of alternative support to women who feel stuck with the option of abortion,” longtime sidewalk counsellor Enza Rattenni told the committee.

“I only want what every women deserves, the right to make an informed choice. This law prevents this fundamental right to all women,” she said.

“This law infringes on the rights of those who have a great love and compassion for these women as I do.”

Bill 163, introduced October 4, is set to pass next week after Progressive Conservatives and NDP MPPs struck a deal with the Liberals to fast-track the legislation.

The far-reaching bill goes beyond “bubble zone” legislation in British Columbia, Quebec and Newfoundland by automatically criminalizing all pro-life activity within 50 meters of Ontario’s eight abortion centers, a distance that can be increased to 150 meters on request.

Bill 163 also allows pharmacies, hospitals and other healthcare facilities that provide abortion, including the abortion pill, to apply for “bubble zones” banning pro-life activity of up to 150 meters.

Wojciechowski told the committee MPPs “on both sides of the floor have been repeating a very toxic narrative. … They claim that harassment at abortion facilities is a constant when in fact it is a very rare occurrence.”

Moreover, “they referred to the experience outside of abortion facilities as ‘war zones,’” he said.

“Because nothing resembles war like a pair of grandmas standing on a sidewalk praying and holding a sign ‘Abortion stops a beating heart.’”

Moreover, the bill assumes a woman walking into an abortion facility “wants the abortion, has made up her mind and is doing so freely. This is not true,” he said.

Rattenni backed this up based on her six years’ experience as a sidewalk counsellor.

During that time, “I have encountered and offered support to over hundreds of women,” she said.

“When they stopped to talk, I found out that despite scheduling appointments at the abortion clinic, they felt trapped by their circumstances and/or pressured into it,” Rattenni told the committee.

“One woman said to me after her abortion, ‘They were really nice to me, but I felt like I couldn’t leave. If I had met you before, I would not have had the abortion’,” she said.

“I urge you in the best interest of those women who feel stuck with abortion as their only option, please do not make illegal the good work that happens on the sidewalk.”

Three women who chose life after speaking with Rattenni were willing to speak to the committee, she said, but couldn’t get day care.

“This is all last minute, but they know what I offered: it was honesty, it was compassion, it was respect.”

Rattenni also brought numerous photos of mothers and children spared the violence of abortion because of the information and assistance offered by sidewalk counsellors.

When she attempted to show these, committee chair Liberal MPP Grant Crack intervened.

The sole response from the committee to Wojciechowski and Rattenni was a further rebuke on that score by Liberal MPP Sophie Kiwala.

“I think the chair already informed you that props are not to be used,” she said. “I have nothing else to say.”

However, committee members did question a number of abortion advocates on whether Bill 163 met their expectations.

The Catholic Civil Rights League, the Association for Informed Political Action, Mississauga 40 Days for Life, and Silent No More also opposed the bill at the public hearing.

Bill 163 goes to clause-by-clause consideration Monday, and to third reading debate — limited to one hour — on Tuesday.

It is expected to pass no later than Wednesday.

The three parties agreed to ram it through after the Liberals refused a Tory motion last week to fast-track the bill, and were then skewered in the press for playing politics by dividing the Tories on the issue of abortion.

Evidently, the Tories are not divided.

Bill 163 sailed through second reading Wednesday by a vote of 85-1 after only three hours of debate Monday, during which PC MPP Lisa MacLeod declared the legislation “perfect.”

MPP Jack MacLaren, a member of the Trillium Party, cast the sole vote against the bill.

MacLaren also sponsored a press conference Thursday organized by Campaign Life Coalition in an attempt to present “the other side of the story on abortion bubble zones.”

Wojciechowski and Rattenni were joined at the press conference by Genevieve Carson from Mississauga 40 Days for Life and Angela Steenstra of Silent No More.

To see video of hearings on Thursday morning, go here.