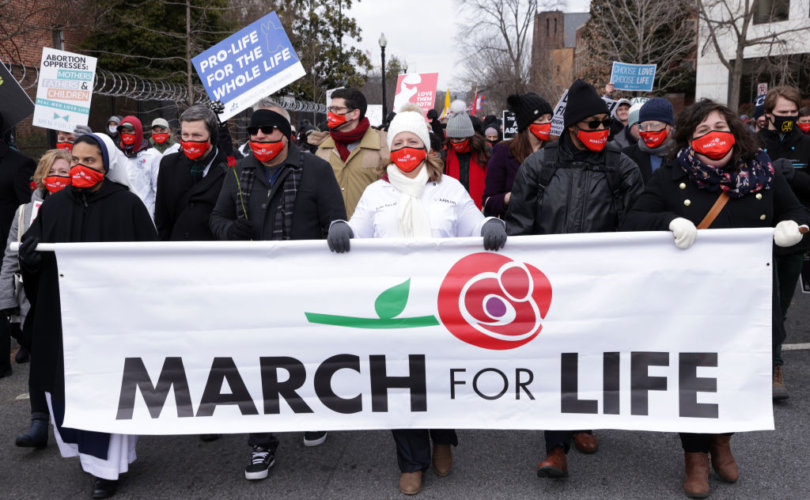 Pro-life activists participate in the 48th annual March for Life outside the U.S. Supreme Court January 29, 2021 in Washington, DC.Photo by Alex Wong/Getty Images

Democrats could also override state-level prohibitions on the state portion of Medicaid being used to pay for abortions through separate legislation, according to the National Review.

The legislation continues to face rewriting. The most up-to-date bill from October 28 can be found here.

“Tell the Senate to Include Pro-Life Protections,” March for Life’s political advocacy arm says. Its website includes a pre-filled message activists can use to make their voices heard.

“A few months ago, Pro-Choice Democrats in the House of Representatives passed the most partisan Appropriations Bill in history, which was devastatingly stripped of all pro-life protections for the first time since 1976, including the Hyde Amendment,” March for Life Action said. “This means that the House voted to force Americans to pay for abortions with their tax dollars, despite that their constituents are not supportive of such a move.”

“Now, the possibility of your taxpayer dollars funding abortion hangs in the balance,” March for Life Action said.

An October 18 highlights sheet from the Senate Appropriations Committee said the budget bill would eliminate the Hyde Amendment.

The U.S. Conference of Catholic Bishops has also asked the Senate to protect preborn lives and to keep pro-life provisions in all spending bills.

“The bills released by the Senate Appropriations chairman this week represent a radical departure from the will of the American people and the principle of justice for all,” Cardinal Timothy Dolan and Archbishop Joseph Naumann said in an October 22 statement. “By proposing to eliminate the Hyde and Weldon Amendments, among other longstanding, bipartisan pro-life provisions, the Senate is staking out an extreme position of forcing taxpayers to pay for the taking of innocent unborn human life and forcing health care providers to participate in this injustice.”

“We reiterate the fact that funding the destruction of innocent unborn human lives, and forcing people to participate, are grave abuses of human rights. We call on the Senate to prevent this injustice by passing appropriations bills that fully support and protect human dignity and the most vulnerable among us,” the two Church leaders said.

The Republican Study Committee, a conservative policy group within Congress, also has a campaign called “#SaveHyde” with further information.

While removing Hyde would make Democratic activists and Planned Parenthood happy, it may hamper the bill that continues to languish in Congress. That’s because Democratic Sen. Joe Manchin, a swing vote, has said he will not vote for bills that do not include the Hyde rider.

“I’m going to support Hyde in every way possible,” the West Virginia Democrat said in June.

Hyde has saved over 2 million babies from abortions, according to Catholic University of America Professor Michael New.

Find your Representative or Senator here