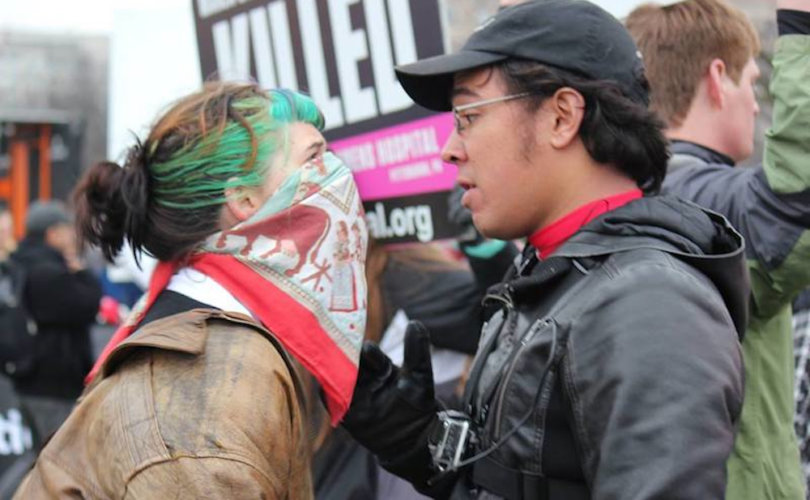 COLUMBUS, Ohio, November 17, 2017 (LifeSiteNews) — Violations of free speech rights for pro-life students is escalating on college campuses and high schools across America beyond the vandalism of pro-life displays that has occurred over the past few years.

Pro-life groups are noticing an ongoing pattern, and one group also says there has definitely been an uptick in face-to-face incidents since the pro-abortion March for Women.

The radical march on Washington, D.C., last January started as simply a pro-abortion event but morphed into a collective of nearly every radical cause, many of which seek to silence speech with which they disagree.

“Ever since the election of Donald Trump, abortion advocates have been more emboldened to violate the law and use whatever means necessary to censor pro-life speech on campuses across America,” Created Equal national director Mark Harrington told LifeSiteNews.

While radical “Antifa” demonstrations have caught a lion’s share of the headlines with widespread violence, a Created Equal release this week chronicled some of the increasing head-on assaults on pro-life speech.

“Sir, can you let go of me?” says Created Equal staffer Sam Riley on a video capturing a student at the University of Pittsburgh grabbing Riley and trying to forcibly steal literature out of Riley’s hands. The student was throwing the pro-life literature away and attempting to distract Created Equal members from performing outreach to students.

“Please get your hands off me,” Riley continues as the male student belligerently challenges him, demanding Riley give him literature that he intended to throw away.

The student falsely insists that he hasn’t touched Riley or his literature to a peace officer passing by.

The officer directs the student not to grab the literature from Riley, and then the student launches a bizarre rendering of freedom of speech that somehow creates justification for his demand for some of Created Equal’s literature.

Students for Life of America (SFLA) said recently on a web post the group had been observing a pattern of abuse of high school and college students’ First Amendment free speech rights and felt it necessary to create a “map of vandalizations,” with more than 40 incidents across the U.S. since 2012.

“Not only does this map show the kind of opposition our students face daily as they speak up for the humanity of a preborn baby and the life-affirming options that women have,” SFLA president Kristan Hawkins said, “it is a testament to the courage and commitment of the pro-life generation.”

Created Equal also shared video in its release this week of an October 11 incident near Ypsilanti Community High School in Michigan. A school officer and an official challenged the pro-life group and falsely assert they could not assemble there and exercise free speech on public property.

Another video chronicles an October 5 altercation at Muncie Central High School in Indiana with a school resource officer attempting to confiscate Created Equal’s signs from public property near the school.

Both groups work to raise awareness and advocate for pro-life free speech on campus in the current climate, which is increasingly becoming more hostile to free speech for pro-life and other supporters of traditional or conservative principles.

“If I were to chronicle these,” he said, “I would run out of space on this page.”

“To deal with the growing threat to our First Amendment rights on college campuses,” Harrington told LifeSiteNews, “Created Equal has thrown our support behind measures to rebuke the ‘safe space’ lunacy dominating our universities.”

In Ohio, he said, legislators are currently attempting to add extra protections to students’ First Amendment rights on college campuses. HB 363, or the Campus Free Speech Act, will soon be introduced in the Ohio House of Representatives.

Additionally, the SFLA group at Fresno State University in California filed suit earlier this year against public health professor Dr. Gregory Thatcher, who tried to destroy their sidewalk chalk messages and also encouraged pro-abortion students to do so as well.

Thatcher had approached the students and wiped out their pro-life messages with his shoe while reprimanding them, alleging they could only express themselves in a “free speech zone,” which the university eliminated years ago.

Thatcher’s admonition of the pro-life students and his defacing of their messages were caught on video.

“College campuses are not free-speech areas,” he stated angrily as he blocked the messages from being seen. “Obviously, you do not understand.”

Thatcher agreed to pay a $17,000 fine — $1,000 each to two students and $15,000 in legal costs — and also attend First Amendment training conducted by the Alliance Defending Freedom to settle the suit, a CampusReform.com report said this week. But Thatcher remains defiant.

Thatcher told Fox News that he won’t have to pay a penny out of his own pocket because  the settlement was made through his insurance company.

“I did not, in any way, admit to any wrongdoing,” said Thatcher. “I did agree to sit through a training seminar because I love to learn others’ thoughts and opinions.”

“College campuses should be a place of vigorous and respectful debate,” Hawkins said in a statement on the lawsuit outcome, “but instead we often find people like Professor Greg Thatcher who abuse authority to block pro-life speech.”

Harrington expressed resolve to keep fighting for freedom of speech for pro-lifers in the important high school and college years.

“The answer to speech students don’t like is more speech, not less speech,” Harrington told LifeSiteNews. “We are prepared to defend the right to defend babies in the public square and the courts.”