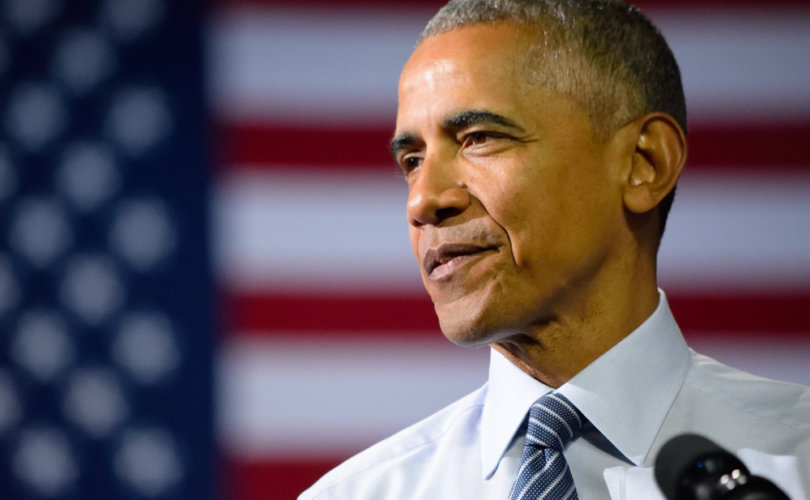 October 14, 2016 (DailySignal) — Pro-life groups are taking action against what they call the Obama administration’s “parting gift” to Planned Parenthood.

“This is a political judgment, a parting gift,” Chuck Donovan, president of the Charlotte Lozier Institute, said of the new rule that could make it more difficult for states to defund Planned Parenthood clinics. “It’s part of the devotion to big abortion.”

The Department of Health and Human Services’ proposed rule came in response to several states’ attempt to defund Planned Parenthood after the nation’s largest abortion provider was featured in a series of undercover videos last year.

Under the rule, states would be prohibited from blocking Planned Parenthood from receiving Title X grant money for reasons “unrelated” to its ability to provide family planning services.

Created in 1970, Title X provides grants to health organizations for family planning services such as birth control and sterilizations. The manner in which states distribute federal Title X funds varies, but grants are typically allocated to health agencies and private networks. Sometimes, it is up to the state to allocate the grant money, and other times, private entities can decide.

After the Center for Medical Progress released several undercover videos last year that raised questions about whether Planned Parenthood illegally profits off the sale of tissue from aborted babies, states—including Alabama, Arkansas, Arizona, Florida, Louisiana, Kansas, Missouri, Ohio, Oklahoma, and Wisconsin—moved to block the group from being eligible to receive family planning funds.

Planned Parenthood denied the allegations, and was cleared in multiple investigations.

“The question isn’t whether states should fund Planned Parenthood,” Steven H. Aden, a lawyer with Alliance Defending Freedom, told The Daily Signal. “All of them do, to my knowledge. The question is whether the states should be permitted by the Obama administration to shepherd limited public health dollars in a way that most effectively delivers primary and secondary health care to women.

“What the proposed rule does is define success under Title X solely on the ability to provide the most contraceptives to the most women. That’s Planned Parenthood’s business model and unfortunately, that’s this administration’s idea of women’s health care. But Title X is much broader than that.”

A summary of the proposed rule, as described by the Department of Health and Human Services, states:

Since 2011, 13 states have taken actions to restrict participation by certain types of providers as subrecipients in the Title X program based on factors unrelated to the providers’ ability to provide the services required under Title X effectively. In at least several instances, this has led to disruption of services or reduction of services where a public entity, such as a state health department, holds a Title X grant and makes 21 subawards to subrecipients for the provision of services. In response to these actions, this proposed rule requires that any Title X recipient subawarding funds for the provision of Title X services not prohibit a potential subrecipient from participating for reasons unrelated to its ability to provide services effectively.

“Explain to me why a woman going to a federally qualified health center that has the Title X grant is gaining access because the grant just went away and went to the Planned Parenthood 5 miles away. That’s what they’re saying,” Donovan said.

Federally qualified health centers provide comprehensive health care to millions of uninsured, working poor, and jobless Americans each year. In addition to providing obstetrician-gynecologist services, federally qualified health centers offer a variety of primary and secondary services. For this reason, Donovan argues women are better off visiting one of these centers to obtain comprehensive health care.

“It certainly is a pro-life issue because Planned Parenthood is so identified with abortion,” he said, “but it’s also much more than that.”

The Daily Signal contacted the National Association of Community Health Centers, which represents 1,200 health centers across the U.S., but the organization declined to comment.

Donovan said he can’t explain why community health centers wouldn’t want to speak out about the grant money they stand to lose but said he “would hope we hear more complaints by them.”

Groups like the American Academy of Family Physicians, American Academy of Pediatrics, and the American Congress of Obstetricians and Gynecologists all came out in support of the Obama administration’s proposal, arguing the rule is “consistent in their efforts to ensure effective and accessible reproductive health care for all populations.”