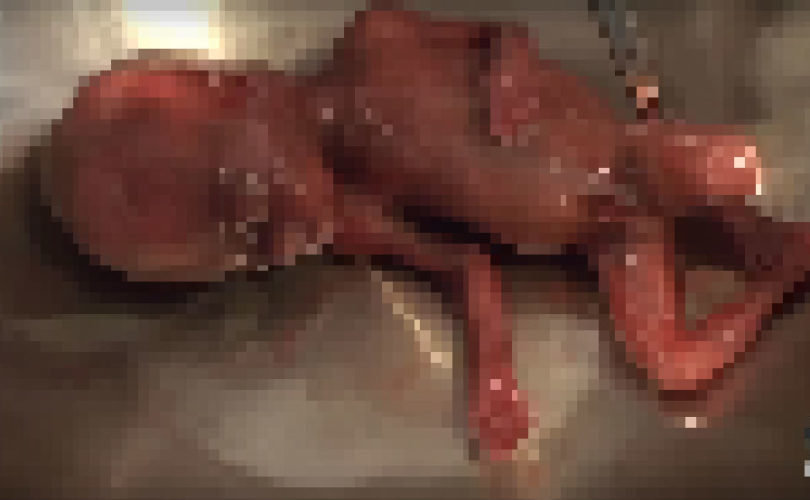 WASHINGTON, D.C., October 2, 2015 (LifeSiteNews) – Presidential candidate Carly Fiorina was right when she said an undercover video shows an intact baby's leg twitching after an abortion, according to the pro-life group that shot the video.

The former Hewlett-Packard CEO has come under fire since saying at the last presidential debate, “I dare Hillary Clinton, Barack Obama, to watch these tapes. Watch a fully formed fetus on the table, its heart beating, its legs kicking while someone says, ‘We have to keep it alive to harvest its brain.’” Numerous outlets accuse her of lying, some going so far as to say none of the footage she described exists.

Fiorina is referring to a scene included in the seventh video released by the Center for Medical Progress.

The baby seen in the footage at the 5:56 mark was indeed taken from inside an abortion clinic, according to the owner of the footage. Gregg Cunningham, executive director of The Center for Bio-Ethical Reform, the organization that obtained the footage and provided it to CMP, said “The video clip we provided to CMP depicted an intact delivery abortion. It was filmed at an abortion clinic.”

At another point in the video, CMP included a clip of a baby who was stillborn at about the same gestational age, for a means of comparison. Some pro-abortion activists had accused Fiorina of falsely claiming that this baby was aborted.

However, she was actually referring to footage of the baby whose leg was kicking, who was indeed an abortion victim, according to Cunningham.

“It was not a miscarriage. Mothers don’t go to abortion clinics to miscarry,” he said.

He refuses to disclose whether the facility that performed the abortion was a Planned Parenthood. “Our access agreements forbid the disclosure of any information which might tend to identify the relevant clinics or personnel with whom we work,” he said. “Preserving confidentiality is vital to future clinic access.”

He added that such footage was “not anomalous. It is representative of the frequent outcomes of many late term intact delivery terminations performed at clinics of all organizational affiliations.”

The Center for Bio-Ethical Reform also released the full, 13-minute-long footage of the abortion [WARNING: This video depicts a complete abortion, including the birth of a living baby. It is EXTREMELY GRAPHIC] in question, showing the preceding abortion procedure.

Nonetheless, the issue came roaring to the surface last Saturday, when a group of Planned Parenthood protesters pelted Carly Fiorina with condoms, chanting that she was a liar.

On Sunday, Meet the Press host Chuck Todd asked Fiorina if she were ready to admit she “exaggerated” the scene, which “at best is a reenactment.”

Instead, Fiorina tripled down.

“That scene absolutely does exist,” she said, referring to the baby's twitching leg.

“And that voice saying what I said they were saying – ‘We're going to keep it alive to harvest its brain’ – exists, as well,” she said.

To date, none of the footage released shows a tech uttering that exact sentence. However, a former StemExpress employee Holly O'Donnell describes seeing a baby's heart beating outside its body sometime before she cut its face open to harvest its brain. It was her first day on the job.

Fiorina defended herself this week. “Many in the mainstream media have tried their best to pretend that these videos don't exist. They repeated the talking points from Planned Parenthood that told them there was no footage of an aborted baby at all. Now that it's clear the video is of an aborted baby left to die in a metal tray kicking for life, they are calling it…stock footage.”

The major networks have virtually blacked out news of the videos, which have instead been featured on cable news networks.

When asked if the mainstream media had disproportionately focused on Fiorina's comments about the videos rather than the contents of the videos themselves, Fiorina's deputy campaign manager Sarah Isgur Flores told LifeSiteNews simply, “You bet.”

Pro-life leader fires back at Dem rep: Planned Parenthood should respond to harvesting charges out of ‘common decency’