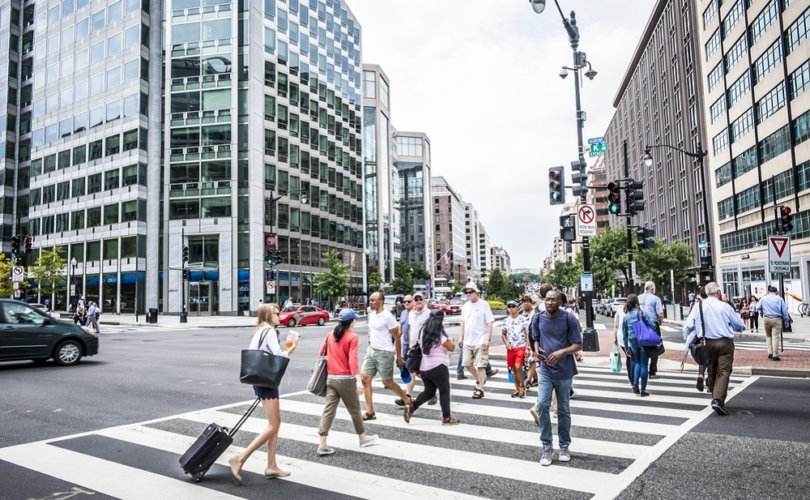 WASHINGTON, D.C., November 19, 2020 (LifeSiteNews) — The Frederick Douglass Foundation and Students for Life of America joined together in a lawsuit filed this week by Alliance Defending Freedom attorneys after the city of Washington, D.C. sent police to prevent peaceful, pro-life individuals from painting BLACK PREBORN LIVES MATTER in temporary paint on a city street, even though other speech was permitted in permanent paint on streets. “City officials were not content to stop a message in temporary paint,” noted Students for Life of America president Kristan Hawkins. “Two students were arrested trying to express in chalk what they were not allowed to say in paint. That kind of viewpoint discrimination cannot be allowed to continue unchallenged.”

Video taken in the early hours on Aug. 1 shows Washington, D.C. police threatening to arrest Students for Life team members for trying to chalk BLACK PREBORN LIVES MATTER outside Planned Parenthood on the 1200 block of 4th Street, NE, after police stopped painting of that message. Prior to the planned, peaceful event, SFLA got a permit and addressed in conversation and a letter that following the city’s decision to allow a private organization to paint a message to defund the police, the pro-life team would be also be expressing their speech in paint. SFLA was asked verbally to use tempera paint and made plans to express our grief over the loss of life in the black community from abortion.

Though only 13 percent of the female population, African-American women make up 38 percent of all reported abortions. Perhaps that is because 4 out of 5 Planned Parenthood vendors are within walking distance of minority-dense neighborhoods, as noted in a Supreme Court amicus brief.

“The government can’t discriminate against certain viewpoints by allowing some voices to be heard while silencing others,” said ADF legal counsel Elissa Graves. “Because of the city’s actions, Frederick Douglass Foundation and Students for Life of America weren’t able to participate in the public square as other groups have. The First Amendment prohibits the government from picking and choosing whose speech to allow.”

After officials in Washington, D.C. silenced the BLACK PREBORN LIVES MATTER message, SFLA and FDF successfully painted a city street in Baltimore as well as displayed the message on billboards across the country.

Click here to learn more about the day of the arrests and here for a video at Breitbart comparing how pro-life Americans were treated in Washington, D.C. compared to Black Lives Matter protesters.