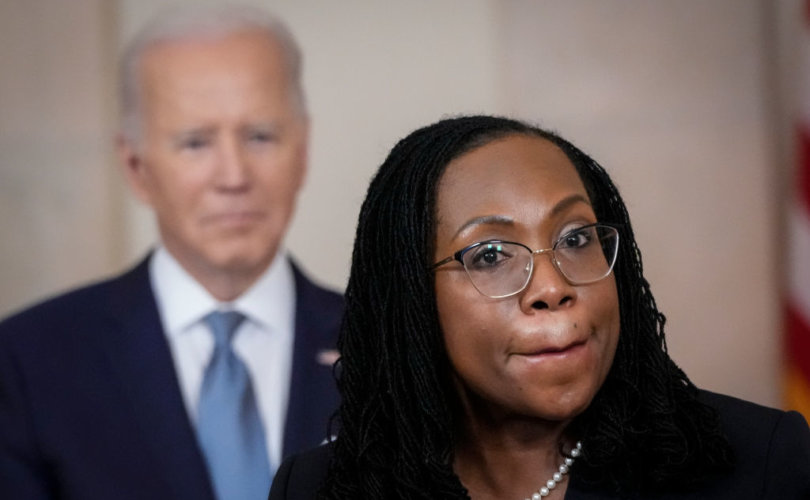 WASHINGTON (LifeSiteNews) — Pro-life and pro-choice groups both agree that D.C. Circuit Court of Appeals Judge Ketanji Brown Jackson’s nomination to the Supreme Court on Friday would bolster the pro-abortion side.

Pro-life and pro-abortion groups mentioned the pending Dobbs v. Jackson case concerning Mississippi’s prohibition of abortions after 15 weeks. The Supreme Court has already heard the case, and even if Jackson could vote with the other justices, she would presumably vote the same way Breyer is expected to — in support of striking down the law.

Judge Jackson is a “politician in robes,” according to Carrie Severino, president of the Judicial Crisis Network. She said President Joe Biden’s announcement on Friday glossed over Jackson’s past work in support of abortion and other liberal causes.

“Missing are details like her work drafting an amicus brief on behalf of pro-abortion organizations in a buffer zone case [McGuire v. Reilly] in which she repeatedly disparaged the peaceful and often prayerful clinic protesters as engaging in ‘in-your-face’ and ‘chaotic’ activity that somehow fell short of ‘pure speech,’” Severino wrote on February 26 for Fox News.

The pro-life Susan B. Anthony List said this is one reason it opposes her nomination to the Supreme Court.

“Ketanji Brown Jackson is backed by many of America’s most radical pro-abortion groups,” SBA List President Marjorie Dannenfelser said in a statement. “She is on record opposing the free speech rights of pro-life advocates pleading to save lives outside abortion centers and supporting the false claim that abortion is ‘health care.’ We have no doubt she will work with the most pro-abortion administration in history to enshrine abortion on demand nationwide in the law.”

“If President Biden thinks to distract the American people from his foreign policy mishaps with a Supreme Court pick, he will be very mistaken. Judge Ketanji Brown Jackson’s record on abortion is so extreme that horrifying late-term abortions will again be in the news,” Kristan Hawkins said. “If infanticide at the moment of birth does not trouble you, your moral compass is broken.”

Planned Parenthood and NARAL think Judge Jackson will be a great justice for their cause.

“This nomination arrives as our freedoms and civil liberties are in crisis,” Planned Parenthood President and CEO Alexis McGill Johnson said in a statement. “We are currently awaiting a Supreme Court decision in the Dobbs v. Jackson Women’s Health Organization case that challenges a blatantly unconstitutional ban on abortion after 15 weeks of pregnancy.”

“Now more than ever, we need a Supreme Court justice who understands the impact of the court’s rulings on people — particularly on reproductive and LGBTQ+ rights — and the importance of protecting individual liberties for generations to come,” Johnson said.

“Judge Jackson … has a demonstrated record of defending and upholding our constitutional rights and fundamental freedoms — including reproductive freedom,” Timmaraju said. “We are confident that she will be a voice for justice, equity, and freedom on the Court in the decades to come.”