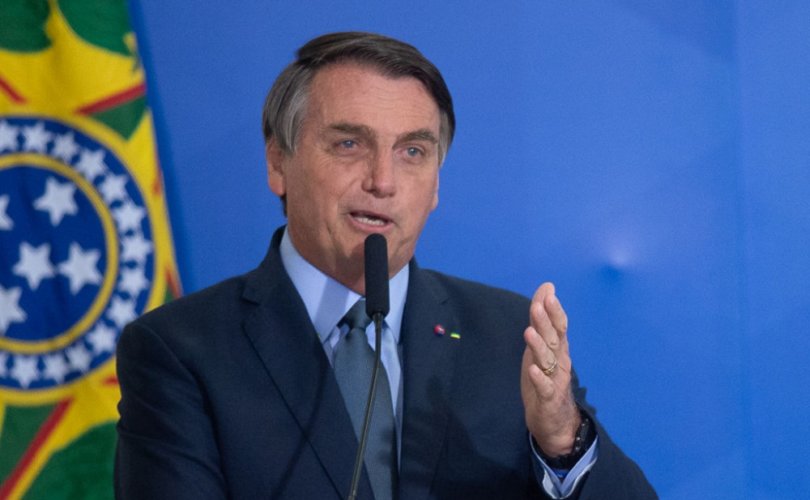 RIO DE JANEIRO, Brazil (LifeSiteNews) – A Brazilian pro-life champion has called on his compatriots to defend unborn babies from abortion when they go to the polls to elect their next president on October 30.

Tonio de Mello, an adoptive father of 46 disabled children, told LifeSiteNews that Brazilians should only vote for politicians who want to protect human life from conception to natural death.

“I, who am the father of all these boys and girls, I know how important it is to have a life, life that has to be respected from conception to natural death,” Mr. de Mello said. “We need to defend life, so think well and value life. Vote for candidates who search for life, who reflect on life, who elevate the family and the power of God in life. Life is a gift.”

Help Tonio care for his 46 disabled children
This pro-life hero has saved so many unwanted babies from abortion.

The comments come after Brazilian president Jair Bolsonaro, who is staunchly opposed to abortion, performed considerably better than pollsters predicted in the country’s first round of voting on October 2.

Polls had placed the conservative leader of Brazil some 14% behind his socialist, pro-abortion rival Luiz Inácio Lula da Silva, commonly known as Lula, but Bolsonaro defied the odds in finishing on 43%, only 5% behind the Workers’ Party candidate on 48%.

Given that Lula did not receive over 50% of the first round vote, he and Bolsonaro now face a run-off on October 30 when Brazilians will choose their next president.

A former president of Brazil, Lula was jailed for over a year in 2018 on corruption and money-laundering charges and has also called for abortion access to be expanded on several occasions.

Abortion is only legal in Brazil if the baby is conceived as a result of rape, has anencephaly, or if the pregnancy is thought to threaten the woman’s life. Some Brazilian women now travel to Argentina to end the life of their child.

As president, Lula claimed without evidence in 2008 that “many people die from clandestine abortions, because the government is prohibited from carrying them out.”

“I believe that a woman who has an abortion never does it because she wants to or for pleasure, but because she is constrained by a situation and it is at that time that the government should attend to those people,” he said.

In 2021 Lula claimed abortion is “a woman’s right,”,while in March this year Cardinal Odilo Pedro Scherer, archbishop of São Paulo, described Lula’s pro-abortion stance as “unfortunate,” with the socialist candidate continuing to frame his rhetoric in terms of “public health.”

Lula (76) nonetheless received the backing of Simone Tebet, the third-placed presidential candidate who received 4% of votes in the first round.

Bolsonaro however has won the endorsement of many state governors, as well as the support of former president Michel Temer.

The current president hosted Tonio de Mello and several of his sons at a special meeting in Brasilia last May, telling those gathered that “life begins at conception.”

READ: ‘I would rather die than lose my freedom’: Brazilian president slams vaccine passports

“Obviously, there are people who want to legalize abortion,” President Bolsonaro remarked. “It shouldn’t happen, for our own sake, for the defense of life, and for our last victory against abortion.”

Many of Mr. de Mello’s 46 disabled children at the Jesus Menino (Boy Jesus) community were abandoned at birth or are the survivors of failed abortions, while others would have been aborted were it not for Tonio’s assistance to women in crisis pregnancies.

LifeSiteNews visited Tonio and his children last year, as readers renewed their support for the pro-life community through LifeFunder.com.

“It started in 1990 when Alexander, the first son of the community – I went to visit the house he lived in, which was a house with 200 boys with disabilities – and Alexander, then he tells me: ‘Man, do you want to be my father?’” Tonio told LifeSiteNews.

“He took my heart. At that time, I became a son of God,” he continued. “God embraced me and there I discovered my vocation to be the father not only of Alexander but a father to all the reality that I live today.”

One child, Jean, was born without a skull or brain, but miraculously continues to live at eleven years of age, despite Tonio being told he would die within months after birth.

“He is the only living boy at this age with anencephaly,” Tonio said. “God wants him to live. He is an instrument in the hands of God.”

Cleiton, whom LifeSiteNews also met, was declared brain dead following a motorcycle accident, with doctors insisting he would never wake up, but Tonio’s visit to his hospital bed changed his life forever.

“I came close to his [Cleiton’s] ear, and I said to God: ‘Lord, if you want that boy to wake up for Your glory, Cleiton, wake up!’” Tonio explained.

“Then I asked him [Cleiton]: ‘Are you listening to me?’” Tonio continued.

Cleiton miraculously answered by moving his finger in reply, confirming to Tonio that he was indeed alive.

Cleiton attributes his life to God working a miracle through Tonio, “turning water into wine” for him.

“I was nobody, today I am [somebody]. He gave me everything, my life again, because I had nothing, no life,” Cleiton shared emotionally.

Mr. de Mello is again seeking support for his many children on LifeFunder.com as they struggle to keep up with bills for food, healthcare and education.