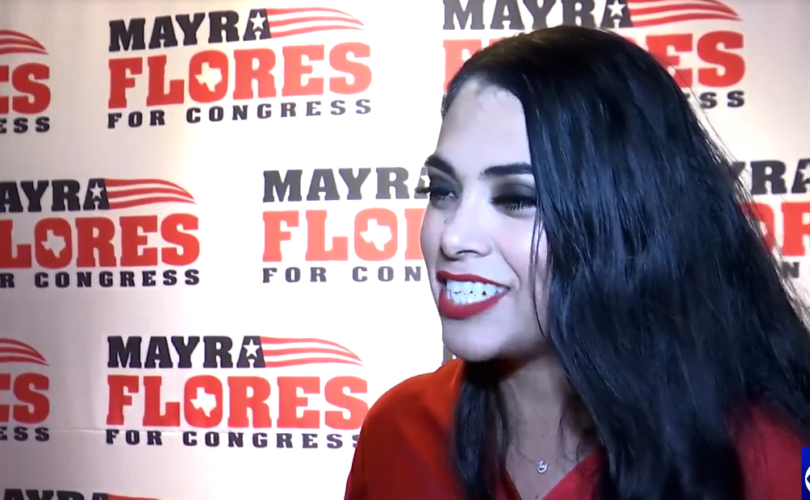 (LifeSiteNews) — In a stunning electoral upset further presaging a massive red tsunami coming in November, a pro-life Mexican-born candidate won a special election in south Texas, the first time the area has chosen a Republican over a Democrat in more than 150 years.

Republican Mayra Flores defeated Democrat Dan Sanchez on Tuesday in Texas’ 34th congressional district, which had voted for Joe Biden over Donald Trump by a margin of 13 points in 2020. The district’s population is 84% Hispanic.

“For over 100 years, we have been taken for granted,” Flores said at an election night party.  “I will show you what real representation looks like. I will represent all people.”

Flores is “the first GOP candidate to represent that area of the Rio Grande Valley since 1870,” reported The Houston Chronicle, and is “the first congresswoman born in Mexico.”

“The victory demonstrated the growing popularity of the Republican party among Latino voters in the traditionally Democratic South Texas,” noted The Post Millennial’s Ari Hoffman.

“Republicans have been eager to flip the seat as part of their new offensive in South Texas after Biden’s underperformance throughout the predominantly Hispanic region in the 2020 election,” explained The Texas Tribune’s Patrick Svitek.

“Flores campaigned hard on her story as the wife of a U.S. Border Patrol agent and as a Mexican immigrant whose parents brought her to the United States as a young child,” continued Svitek.  “She mostly ignored Sanchez but took a sharp tone against Washington, D.C., Democrats in general. In one of her TV ads, she said the Rio Grande Valley is ‘under attack’ at the border and promised not to let the ‘compadrismo’ — cronyism — ‘in Washington ruin our communities.’”

Included among the voters who pulled the lever for Flores was the world’s richest man, Tesla and SpaceX CEO Elon Musk.

Musk also predicted a “Massive red wave in 2022,” referring to the upcoming midterm elections in November.

I voted for Mayra Flores – first time I ever voted Republican.

“Welcome to the Republican Party!” responded Flores. “We welcome all walk aways from all walks of life. The party of opportunity, prosperity, and freedom is here to stay. We look forward to working together and building a better future for all of America.”

Welcome to the Republican Party! We welcome all walk aways from all walks of life. The party of opportunity, prosperity, and freedom is here to stay. We look forward to working together and building a better future for all of America 🇺🇸 🚀 #SaveAmerica #TX34

Musk was then asked which GOP presidential candidate he would vote for.  Musk answered, “DeSantis,” referring to Florida Gov. Ron DeSantis.

When Gov. DeSantis was asked at a press conference about Musk’s early show of faith in his possible presidential run, the governor reacted with humor, “I’m focused on 2022, but with Elon Musk what I would say is, you know, I welcome support from African-Americans.”

“I’m focused on 2022, but with @elonmusk what I would say is you know I welcome support from African-Americans. What can I say?” – @GovRonDeSantis pic.twitter.com/SuWQVLMORE

Because South Africa-born Musk is white, liberal pundits disregarded DiSantis’ humor and chose instead to be outraged.

MSNBC host Joy Reid announced, “[I] said before that Gov. Ron DeSantis is a humorless, more openly fascist version of Trump. Here he is displaying the former quality in that for him, ‘humor’ means mocking Black Americans with his own, idiotic and offensive version of replacement theory. Black Floridians take note.”

If said before that @GovRonDeSantis is a humorless, more openly fascist version of Trump. Here he is displaying the former quality in that for him, “humor” means mocking Black Americans with his own, idiotic and offensive version of replacement theory. Black Floridians take note. https://t.co/X25PoKLubv

“And we thought we couldn’t do worse than Donald Trump,” tweeted ABC contributor Yvette Simpson. “They are saying the ‘racist part out loud’ and laughing about it. No more white sheets— it’s all out in the open now.”

And we thought we couldn’t do worse than Donald Trump. They are saying the “racist part out loud” and laughing about it. No more white sheets—-it’s all out in the open now. 😳👀🙄 https://t.co/bVeTTDvbEi

Black Republican Vernon Jones, a Trump-backed candidate for U.S. Congress in Georgia, played off of DeSantis with a good-natured tweet, saying, “Congratulations to my African-American brother Elon Musk on his first Republican vote haha!”