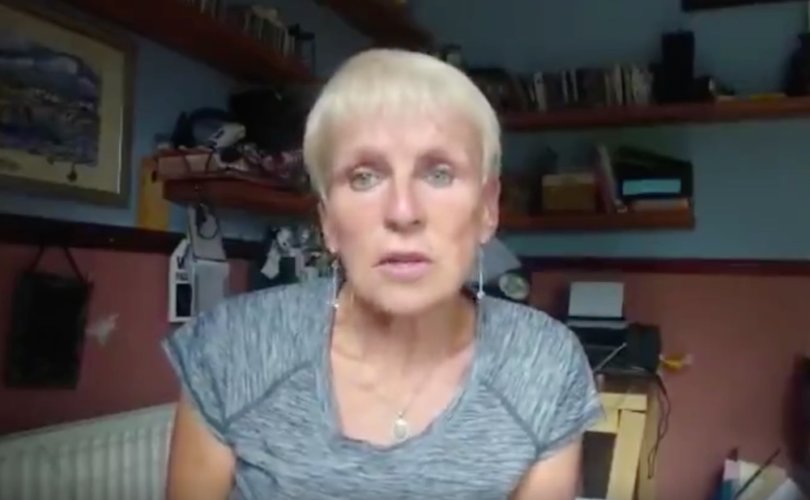 DERRY, Ireland, (LifeSiteNews) – A doctor in Northern Ireland has been suspended after posting a video online in which she recounted her eyewitness account of injuries and “damaged” people following the COVID-19 vaccines, and warned people away from the injections.

Dr. Anne McCloskey’s 9-minute video, in which she warned people about injuries linked to the vaccines – something which she says she has personally witnessed – led to her swift suspension by the Health and Social Care Board (HSCB), who took a “very serious view” of her comments.

The 30-year veteran medic, a pro-life campaigner, warned about the “real harm” which the COVID-19 shots are having, particularly on young people.

Northern Ireland’s Chief Medical Officer, Sir Michael McBride, subsequently weighed in against McCloskey, saying he was “personally appalled” by her stance and that “the evidence on the effectiveness of the vaccines is irrefutable.”

In the face of much media opposition to McCloskey, over 6,000 people have already signed a petition demanding that the “well-known and popular GP” be reinstated.

In her video, Dr. McCloskey, who works as a General Practitioner (GP) in an Out-of-Hours Service in Derry, recounted her experience as a GP witnessing numerous “sick, distressed, worried, traumatized” patients.

“Almost all of them, with the exception of small children, have been double jabbed,” continued McCloskey, who referred to the COVID-19 injections as “an experimental genetic therapy.”

Mentioning that some of those who had taken the injection had been “coerced, bribed or bullied,” the veteran GP described how in comparison to last year, hospitals and emergency departments are “full,” despite many people having had “two doses of injections.”

“I’m seeing young people, healthy – previously fit young people – who are damaged, God forbid that it’s irreparably,” added McCloskey. One of her patients was a “young girl” with an upper arm blood clot, which McCloskey had “never seen” in a healthy young person in her “40 years of medicine.”

Another patient of McCloskey’s was a “young man” who had been “unable to get out of bed for two weeks” since his COVID injection.

“This whole hype has largely been a figment of the media, and the government and their lying scientific advisors and their deceptions,” stated McCloskey.

In the wake of such pressure on the health services with seemingly vaccine-caused injuries, McCloskey stated that for “large parts” of the previous Sunday, she was the only GP covering Derry, and areas over 30 miles from the city.

“I am not sleeping at night worried about what these injections are doing, because they’re certainly not improving the health and well-being of the community,” continued McCloskey.

McCloskey retired in 2019 after over 30 years of service, but returned to the forefront of the medical service last spring, when calls were made for increased numbers of health staff in light of the onset of COVID-19.

“We who look at real world data, and have been studying this from the beginning, can see that this is not about health. These injections are doing real harm, they are certainly not providing any physical protection for people, and they are still in clinical trials for another two years,” said McCloskey.

She attacked the “false assumption” of there being no other treatments for COVID-19, which has allowed the experimental injections to be granted emergency use authorization, stating that it is “chilling” to understand the “potential harms” the injections might have.

People around the world who have taken the injections “in good faith…have been lied to” stated McCloskey. “This must stop.”

“We need to stop this,” she added, referring to the vaccination drives, “we need to get the information out.”

“People are being harmed, and people are dying,” she warned.

The latest data released by the U.K. documents over 1,500 deaths following the administration of a COVID-19 vaccine. A total of 1,151,768 adverse reactions have now been reported to the MHRA Yellow Card scheme, the U.K’s voluntary scheme for recording adverse reactions to vaccines.

However, in a 2011 study by Harvard Pilgrim Health Care, similar databases in the U.S. were found to represent “fewer than 1%” of the true total of adverse reactions.”

Indeed, McCloskey noted how the MHRA forms to record such reactions in the U.K. are “incredibly complicated, I would contend deliberately difficult to fill out.” She added how she has “never spoken to another doctor locally who even know how to do it.”

— Article continues below Petition —
PETITION: No to mandatory vaccination for the coronavirus
Show Petition Text
1079945 have signed the petition.
Let's get to 1100000!
Thank you for signing this petition!
Add your signature:
Show Petition Text

‘Precautionary’ suspension for warning about dangers of the injections

Following her comments, McCloskey has now been suspended by the HSCB, who described the move as a “precautionary measure” after complaints against the GP were reportedly made by fellow medical colleagues and “members of the public” who objected to her “behaviour and conflict of interest.”

“Patients often turn to GPs as a source of medical advice and GPs must inspire confidence and trust in patients,” stated the HSCB, adding that they are performing an “urgent investigation” into McCloskey’s comments. A suspension is not an automatic occurrence when an investigation is performed.

However, speaking to the Belfast Telegraph, the GP defended her video, saying it was made “as a scientist and a practising physician” and with the “safety of young people” in mind.

McCloskey is a former member of political party Aontú, and a counsellor for Derry. She has formerly spoken out against the promotion of abortion in Northern Ireland, calling pro-abortion activists “paid agitators.”

The anti-lockdown campaigner also attacked the British Parliament for its attempt to impose abortion on Northern Ireland, saying the “House of Lords had discussed foxhunting for 120 hours, and the abortion of Irish babies for just 20 minutes.”

Health and Social Board