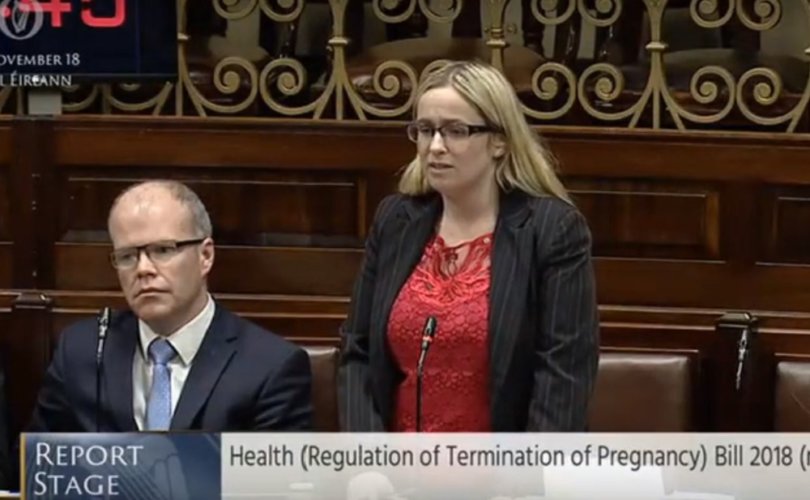 November 30, 2018 (Society for the Protection of Unborn Children) – In a telling display of the intolerance shown towards anyone with a pro-life view in Irish politics, a politician has been subjected to vicious personal attacks for trying to amend the extreme abortion bill being rushed through the country's parliament.

Carol Nolan, the TD (member of the Dáil, the Irish parliament) for Offaly, who recently quit Sinn Féin after being suspended for voting against party policy on abortion, tabled an amendment to the Health (Regulation of Termination of Pregnancy) Bill, seeking to ensure that taxpayers' money is not used for abortions. Health Minister Simon Harris announced in September that abortion would be provided free on Ireland's health service.

Unlike in the UK, under Ireland's two-tier healthcare system, nearly 70 per cent of the population have to pay fees for healthcare services. A trip to accident and emergency costs €100, a stay in hospital €80, and a GP visit €45-75. Abortion, which will be available on demand up to 12 weeks without reference needed to the woman's health, will be provided free of charge.

During the report stage of the bill, the last chance for amendments, Deputy Nolan asked why the public was being asked to “fund a service of forcing a fatal act on others who have done no wrong”, and described how an abortion is carried out.

Her amendment was defeated by 90 votes to 9, but not before she was attacked by TDs on all sides. Fianna Fáil TD Lisa Chambers described Ms Nolan's amendment as “sinister”, while People Before Profit TD Richard Boyd Barrett said that the description of the abortion procedure was designed to induce “trauma, fear and shock.”

The most vicious abuse came from Sinn Féin's Louise O'Reilly, who also accused Ms Nolan of trying to “inject shock tactics and US nonsense”, and said her comments “displayed no compassion” and were “dripping with judgement, dripping with a kind of visceral hatred of women.” Bizarrely, she also said Ms Nolan was doing “the bidding of a certain well known businessman.”

A visibly tearful Ms Nolan was forced to defend her character, and to reiterate that she was seeking to represent the views of the 723,632 people who voted No in the referendum on the Eighth Amendment, and of the many people who voted Yes who have problems with the legislation as it now stands.

Bullied into silence or cast out

The refusal by the major political parties to allow any deviation from the pro-abortion position or to allow any amendments to the legislation means Ms Nolan is not the only TD to have been forced out of her party. Peadar Tóibín has now left Sinn Féin after the party suspended him for six months for voting against the abortion bill, while Peter Fitzpatrick resigned from Fine Gael in part because of the governing party's promotion of abortion.

Deputy Nolan summed the situation up, saying: “Unfortunately, many Pro-Life have been bullied into silence, but I won't allow my views on the issue to be silenced, it appears that democracy in Dáil Éireann only exists if you hold a liberal and pro-choice view – so much for equality and respect. My sole motivation at all times has been a concern for the welfare of women and their unborn babies.

“I am not accustomed to describing the abortion procedure in detail but when colleagues in the Dáil won't even support an amendment to provide pain relief for an unborn baby during a late-term abortion then I think it is reasonable to challenge them on what they are doing.”