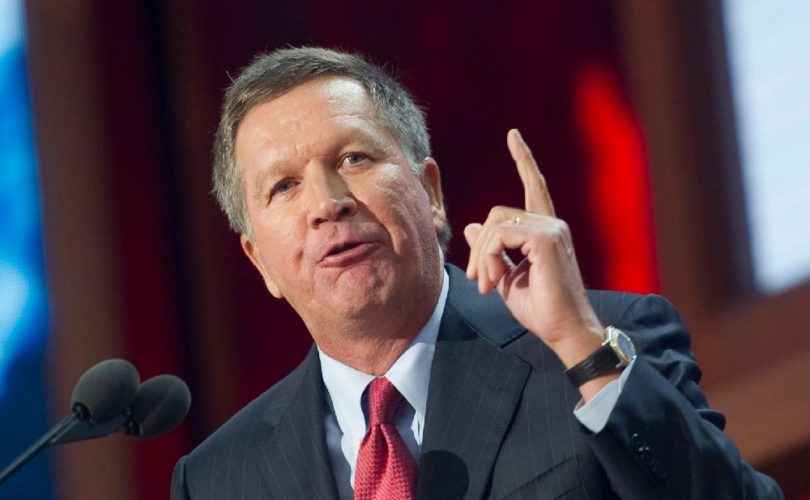 COLUMBUS, Ohio, November 20, 2018 (LifeSiteNews) – Ohio Gov. John Kasich, a past and potentially-future Republican presidential candidate who bills himself as “pro-life,” has renewed his opposition to pending legislation that would protect almost all pre-born babies in his state.

On Thursday, the Ohio House voted 60 to 35 to pass House Bill 258, which bans abortions on any pre-born baby with a detectable heartbeat, except in cases of a “substantial and irreversible” physical threat to the mother. Any physician who violates the statute would face up to a year in prison. Pre-born babies’ hearts finish forming around seven or eight weeks into pregnancy.​​

“Establishing human heartbeat protections in Ohio is a historic opportunity for those committed to the cause of life,” Right to Life of Greater Cincinnati declared last week.

Kasich confirmed he remains opposed to the heartbeat bill during a meeting with reporters at the statehouse Monday, the Toledo Blade reports. “I see nothing that’s coming that would make me change my position,” he claimed.

Kasich vetoed a similar measure in 2016, claiming that while he’s pro-life he was unwilling to provoke a court battle over the bill’s constitutionality he deemed certain to fail. Pro-lifers argue the bill’s chances have improved thanks to President Donald Trump’s Supreme Court nominees. Pro-lifers also note that virtually every pro-life law, from ones protecting babies from being aborted because they have Down Syndrome to measures requiring abortion centers to meet basic health and safety standards, ends up being challenged in court anyway.

Several pro-life leaders have denounced Kasich’s resistance, the Columbus Dispatch reports. Faith2Action president Janet Porter, a longtime advocate of the legislation and its federal counterpart, declared that pro-lifers would “override him and he can never run again as a ‘pro-lifer.’”

“Kasich should be ashamed of himself,” Citizens for Community Values president Aaron Baer said. “He has the opportunity to save upwards of 10,000 lives per year, but is choosing to veto a law that Ohio clearly wants. Where’s the compassion in that?”

The bill’s fate appears beyond Kasich’s control, however. The Ohio House passed it with a large enough margin to override a veto, and Republicans outnumber Democrats 23 to 9 in the state Senate. Senate President Larry Obhof said he believes the bill has the votes to pass, but was unsure whether it will receive the 20 needed for a veto override.

“My anticipation is we’ll pass both and see how things unfold after that,” he said.

Another factor is that incoming Gov. Mike DeWine has previously said he supports the bill, making it likely to pass next year even if Kasich kills it in the coming weeks.

“There’s also a question of, does Mike DeWine want to work with us on those issues in January,” Obhof told the Dispatch. “Are these things better dealt with right now, even though we will have to push back on the governor, or could they just as easily be done on Jan. 20?”

Kasich is a former Congressman who ran unsuccessfully in the 2016 Republican primary for president, and has hinted at challenging Trump in 2020. Though a nominally “pro-life” governor (and one supportive of exceptions for babies conceived in rape and incest) who signed some pro-life laws, he has also claimed that Republicans “focus too much” on abortion, that Roe v. Wade is “the law of the land now and we live with the law of the land,” and that Republicans shouldn’t risk a government shutdown fight to defund Planned Parenthood.

In 2016, pro-lifers faulted Kasich’s administration for issuing a waiver that let a Cincinnati Planned Parenthood location continue committing abortions despite failing to have a state-mandated transfer agreement with a nearby hospital in case of emergencies.