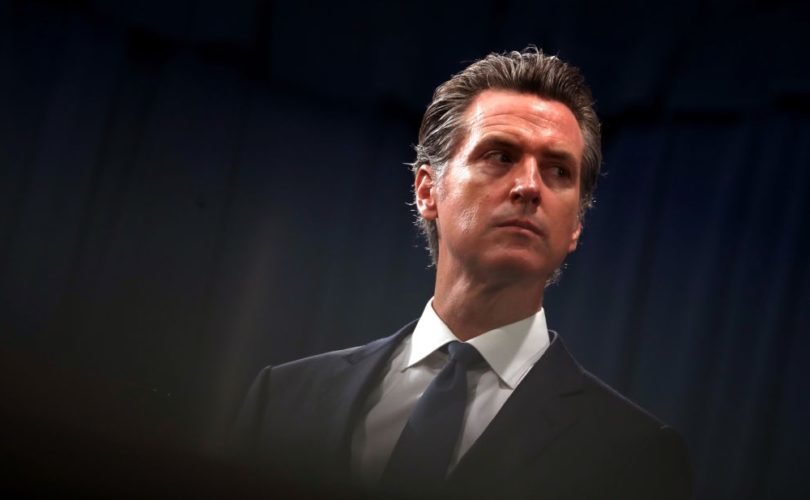 CALIFORNIA (LifeSiteNews) Attorneys from a pro-life nonprofit have filed a federal lawsuit to stop a new California law that prohibits protests and sharing information outside of any place that offers vaccines, including abortion centers.

The legislation makes it illegal “for a person to knowingly approach a person or an occupied vehicle at a vaccination site, as specified, for the purpose of obstructing, injuring, harassing, intimidating, or interfering with, as defined, that person or vehicle occupant.”

“Using the threat of COVID as an excuse,” LLDF wrote, “the Legislature enacted a breathtaking restriction on speech that will ban core First Amendment activity in numerous locations across California.”

Its lawsuit details how the Supreme Court has ruled against similar attempts to establish broad “buffer zones” around abortion facilities. Because Planned Parenthood does offer some vaccines, it would be included under this law.

“The Statute prohibits approaching within 30 feet of any person, while that person is within 100 feet of the entrance or exit” of a place of vaccination, the lawsuit says.

Restrictions on speech must be “content-neutral” Supreme Court Chief Justice John Roberts told Massachusetts in 2014, ruling on the Constitutionality of a 2007 state law that created a 35-foot buffer zone outside of abortion facilities.

The California law exempts “lawful picketing arising out of a labor dispute” from the penalties imposed under the legislation, which include “a fine not exceeding $1,000, imprisonment in a county jail not exceeding 6 months.”

While the law has prohibitions against actual violence, it also prohibits harassment, defined as “passing a leaflet or handbill to, displaying a sign to, or engaging in oral protest, education, or counseling with, that other person in a public way or on a sidewalk area.”

The lawsuit also says that the state failed to establish a “compelling government interest” in promoting vaccines. But even if California did establish it, the state has not established that this law does it in the least restrictive way.

“The Statute bans approaches of any person seeking entry for any reason to any location where any vaccine is provided,” the lawsuit says. “Creating speech-free zones around every drug store, stand-alone health clinic, and supermarket in the state in order to re-assure the occasional customer seeking a vaccine of some kind is hardly a narrowly drawn restriction on speech.”

“On the contrary, it is unconstitutionally overinclusive and overbroad,” Life Legal’s attorneys said.

“Plaintiffs are likely to prevail on the merits of their claims that the Statute is an unconstitutional restriction on speech in a public forum,” the injunction request says, “because it is not narrowly tailored and does not leave open ample alterative channels of communication.”

“Creating no-approach zones around every abortion facility, drug store, stand-alone health clinic, and supermarket in the state is unconstitutionally over-inclusive and overbroad,” LLDF Chief Officer Katie Short said in a statement. “In an age of unprecedented incursions on freedom, this law is an unheard-of restriction on core First Amendment activities, and we are confident that the federal court will strike down SB 742.”

— Article continues below Petition —
BOYCOTT United over religious and medical COVID vaccine exemptions
Show Petition Text
21663 have signed the petition.
Let's get to 22500!
Thank you for signing this petition!
Add your signature:
Show Petition Text

The law went into effect on Friday because its sponsors declared it an “emergency” law.

But Democratic State Senator Richard Pan first introduced the legislation in February, apparently prompted by a protest outside of the Los Angeles Dodgers’ baseball stadium on January 30.

Protesters “temporarily shut down Saturday because dozen of protesters blocked the entrance [to a vaccination site],” the Associated Press reported.

Officials running the site shut it down at 2 pm and opened it up “shortly before 3 p.m.”

“There were no incidents of violence,” the AP reported.

“Health care workers administering vaccines and saving lives need local officials to have SB742 to keep them and their patients safe from extremists who obstruct and threaten people with violence and loss of privacy for participating in COVID-19 vaccination clinics,” Senator Pan said in a statement on October 9.