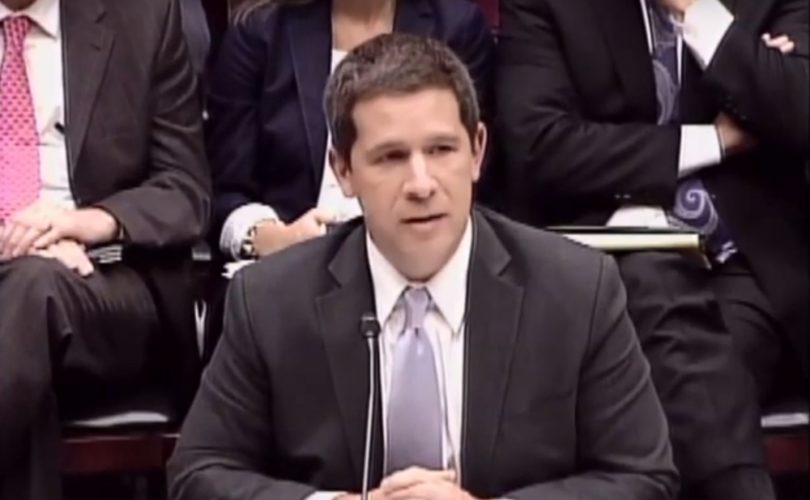 WASHINGTON, D.C., September 17, 2015 (LifeSiteNews) — A pro-life attorney told Congress today that, contrary to the claims of the Obama administration, Planned Parenthood does not have a right to federal or state taxpayer dollars.

Citing the Ninth Circuit Court, Alliance Defending Freedom (ADF) Senior Counsel Casey Mattox said, “During the pending investigation, a provider can be excluded” from Medicaid funding. “What that recognizes is that there is no liberty interest or a technical right that Planned Parenthood or any other provider has to Medicaid funds. That is a privilege they [have to] earn from the taxpayers.”

“Imagine that you're talking about something other than Planned Parenthood; that's a self-evident proposition,” expounded Mattox. “The idea that a Medicaid provider … say a gynecologist, accused of abusing women, the idea that we would require that Medicaid continue to provide funding to that doctor until a jury actually convicts would be abhorrent.”

The Obama administration has threatened the five states that defunded Planned Parenthood with lawsuits, saying that the states are violating federal laws that require “family planning” services and supplies for anyone of child-bearing age. According to the administration, ending state partnerships with Planned Parenthood would limit beneficiaries' access to care and services from “qualified providers of their choice.”

Pro-abortion politicians, the abortion industry, and other allies have also claimed that Texas' elimination of funding for Planned Parenthood has harmed the ability of women to get health care. Mattox said that “the number of contraception claims in Texas did immediately drop” after Planned Parenthood funding was pulled, “but the actual pregnancy rate in Texas, as did the abortion rate in Texas.”

“So we haven't seen, in Texas…the public health catastrophe we've been told to expect.”

Later, Mattox said that “in the last two decades or so, about 9,000 providers [were] excluded from Medicaid. In most of those cases, they're completely uncontroversial. … When it's Planned Parenthood, however, you have the Centers for Medicaid Services reinterpret the Medicaid statute to deny states the opportunity to exclude those providers.”

“That is a privilege that other providers don't get to have.”

In response to CMP opponents saying its undercover videos are “deceptively edited,” Mattox said, “If you have access to YouTube, you have access to the full videos.” He noted that CMP has clarified that the only deletions from its 40-plus hours of video are breaks from conversations, bathroom visits, etc.