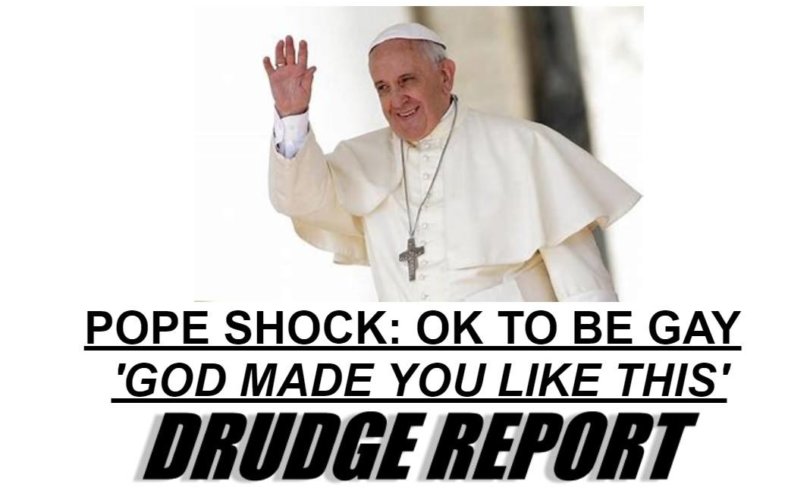 Popes have made mistakes or created scandals throughout history, Rose said in a Facebook post. “But this has never changed and never will change the Church’s teaching.”

The president of Live Action, the pro-life group composed of young people that came to prominence with its undercover investigations of the abortion industry, recapped the eternal nature of the Church’s teaching in her post. She also explained the truth of God’s love — that God loves His children, even in their fallen state — but His love does not equate to approval for all behaviors.

Juan Carlos Cruz had told a Spanish news outlet about specifics of a private conversation he had with the pope when the two met last month in Rome about the clerical sex abuse crisis in Chile.

Cruz said Francis told him among other things that it doesn’t matter he’s gay, God “made him like that and loves him like that,” and he should “be happy with who he is.”

These comments conflict with Church teaching, which states that human beings are not defined by their sexual inclinations and also that same-sex inclinations are objectively disordered, a state that would not be willed by God.

The Church also regards homosexual acts, which it defines as contrary to natural law, as separate from same-sex attraction.

And while the Church says individuals who experience homosexual tendencies “must be accepted with respect, compassion, and sensitivity, and “every sign of unjust discrimination in their regard should be avoided,” it also holds that “homosexual persons are called to chastity.”

The Vatican has declined comment on the gay-affirming remarks attributed to Pope Francis.

Secular media by and large has taken them and gone with the narrative that the pope gave carte blanche to homosexual activity, inferring a change in the Church’s stance on homosexuality. The reports have further emboldened the LGBT lobby and dismayed same-sex-attracted Catholics endeavoring to live in accord with the Church’s teaching on sexuality.

There is disagreement within the pro-life community on whether pro-life activists should be involved in the issue of homosexuality – and disagreement as well in stances on the issue.

Some pro-life activists do understand, though, that the issues of life and sexuality are completely intertwined, not only because the marital act creates life but also because opposition to God’s plan for marriage is also opposition to life.

The Church’s teaching on homosexual acts that says they go against natural law goes on to state:

They close the sexual act to the gift of life. They do not proceed from a genuine affective and sexual complementarity. Under no circumstances can they be approved.

Rose shared an article on the pope’s reported comments to Cruz in her Facebook post and noted that it’s hard to know just what Francis said in the private conversation, “but there are three things we know for sure.”

She began with confirming that God does love everyone, but clarified that this does not translate to blanket approval of behaviors.

“God loves everyone, no matter what,” Rose said. “We are all His sons and daughters.

“That doesn’t mean God approves of all our behaviors,” Rose added. “Every person is born in a wounded state and suffers desires, attractions and temptations that are not from God.”

Her second point was that “the Catholic Church’s teaching on marriage and sex is 2,000 years old and will never change.”

“It manifests what we know to be true psychologically and biologically,” Rose said. “Sex is designed to be both procreative and unitive. Any other sex, including adultery and fornication, etc., violates natural and divine law.”

Her final third point was an explanation of the conditions necessary for something a pope says to be infallible, or for him to speak ex-cathedra.

“There are three conditions necessary for a Pope’s statement to be ex-cathedra,” Rose said. “The Pope must speak on a subject of faith or morals; He must speak as the Vicar of Christ and to the whole Church; and he must indicate by certain words, “we define,” “we proclaim,” etc., that he intends to speak infallibly.”

“Throughout history, there have been Popes that have made mistakes or caused scandals, Rose concluded. “But this has never changed and never will change the Church’s teaching.”

Pope Francis has sent troubling and confusing signals in the area of homosexuality a number of times during his pontificate.

His infamous “If someone is gay and seeks the Lord with goodwill, who am I to judge?” comment in 2013 in regard to an actively gay priest working in the curia caused considerable damage in terms of leading people to believe the Church was changing its teaching on homosexuality. It earned him the “Person of the Year” designation from the gay publication The Advocate that year.

Earlier this year, a French priest announced in a television interview that he received Francis’ approval to bless homosexual couples. Similar to the conversation with Cruz, there has not been a Vatican denial of the statements.

Last fall, the pope indicated in an interview that he supports legal recognition of same-sex unions – a conflict with Church teaching.

During his 2015 visit to the United States, he welcomed at gay couple – a former male student and his male partner – with an audience at the Vatican embassy in Washington D.C.

Despite the unchanging nature of Church teaching, a recent Pew Research survey said that approximately three-quarters of U.S. Catholics think Pope Francis has made the Church more accepting of homosexuality.