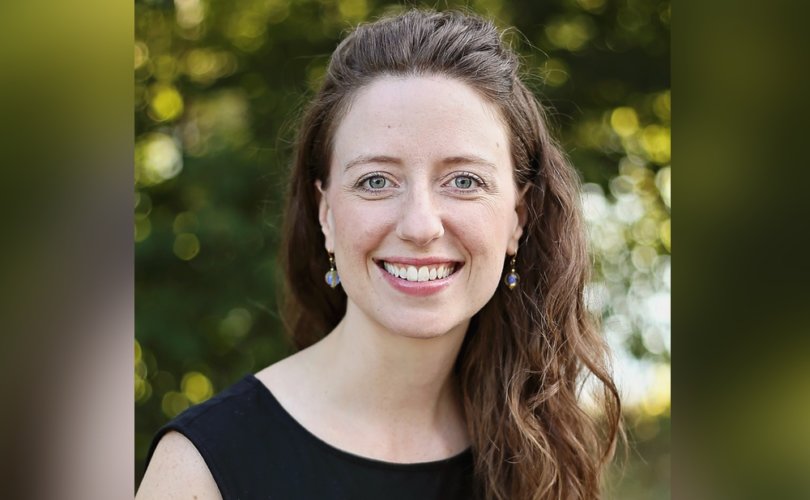 Singer, a Princeton professor, has argued in favor of bestiality, killing newborns, euthanasia, and experimenting on and even raping the disabled.

Gray Connors (née Gray) is a speaker with vast experience presenting pro-life arguments. Since leaving the Canadian Centre for Bioethical Reform (CCBR) in 2014, she has offered training courses and speaking engagements internationally. She is perhaps best known for her 2017 “Talks at Google” appearance, which has been viewed over 200,000 times.

In a recent interview, Gray Connors recounted how she became convicted that she was to spend her life in the service of the unborn. The prompting came during a talk by pro-life apologist Scott Klusendorf during her undergraduate studies. “He taught us how to be winsome and persuasive and logical and reasonable, and during that presentation he said ‘there are more people working full-time to kill babies than there are working full time to save them,” she said. She trained with Klusendorf over the course of her studies and started working full-time in the pro-life movement once she graduated in 2002.

Her upcoming debates with Potts and Singer will cover some old territory and some new. Gray Connors has debated Potts several times before. One of those debates can be viewed here.

Potts is a professor of public health at the University of California Berkeley and was the first Medical Director of the International Planned Parenthood Federation. In a 2010 editorial for The European Journal of Contraception and Reproductive Health Care, he wrote that he was “was perhaps the first Western physician to do outpatient vacuum aspiration abortions under local anaesthesia.” The debate between Gray Connors and Potts will be aired live on Matt Fradd’s Pints with Aquinas on October 20.

But the October 22 debate will be the first time that Gray Connors has debated Singer, the infamous Princeton Professor of Bioethics, whose radical views on human life will be familiar to many LifeSiteNews readers.

A dedicated utilitarian, Singer’s arguments generally begin from the premise that the conscious ability to experience pleasure or pain is the fundamental criterion for determining which lives have value. He pioneered the concept of “speciesism,” the idea that it is mere prejudice that makes human beings think that animals are inferior life forms. Gray Connors’ debate with Singer is being hosted by the Harvard Right to Life Club and sponsored by Massachusetts Citizens for life. The Zoom seminar has a limit of 500 participants, but the debate will also be will be live-streamed on several venues, including Facebook, YouTube, and the Massachusetts Citizens for Life website. The debate will take place on October 22 at 7:00 p.m. Eastern Time.

Gray Connors’ debate with Potts will be live-streamed here. Information on her debate with Singer and how to watch it live can be found here.

This man supports bestiality, infanticide and experimenting on the disabled: and he’s the most-celebrated moral philosopher of our time

A debate with a late-term abortionist: the banality of evil