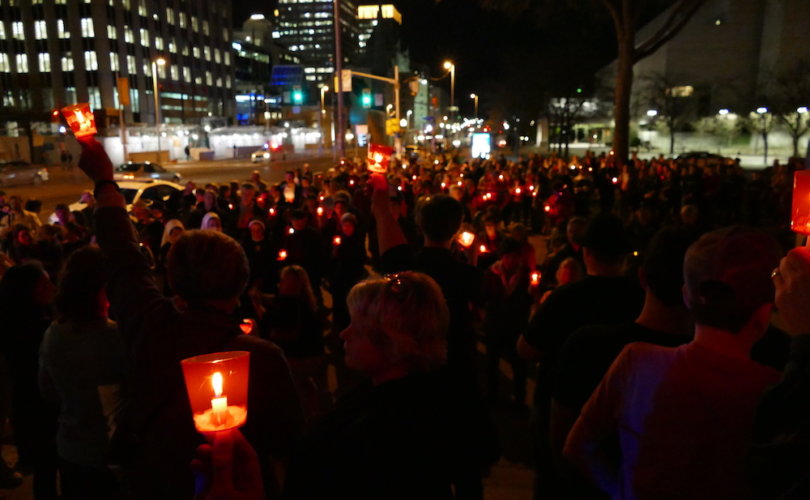 Canadian pro-lifers take part in a vigil for the victims of abortion the next before the National March for Life in Ottawa, marking the passage of the Omnibus Bill on May 14, 1969.Claire Chretien / LifeSiteNews

January 27, 2017 (LifeSiteNews) – As the January 28th anniversary of the Supreme Court of Canada’s 1988 Morgentaler decision approaches, pro-life leaders are cautioning Canadians against marking or mourning it unduly. More important to Canadian defenders of life should be Prime Minister Pierre Trudeau’s passage of the so-called Omnibus Bill in 1969.

“We’ve always believed the focus should be on what Pierre Trudeau did that day,” Campaign Life Coalition President Jim Hughes told LifeSiteNews. “Because of the Omnibus Bill, the doors to abortion were thrown wide open.”

Pro-abortion groups promote January 28th, the anniversary of the Morgentaler decision, as Canada’s version of Roe v. Wade, the U.S. Supreme Court’s 1973 ruling throwing out all state laws criminalizing abortion. “They do that so that they can make Henry Morgentaler their great hero,” said Hughes.

But “abortions went from 200 in 1968 to thousands in three or four years. That is why we’ve recognized the Omnibus Bill ever since,” said Hughes.

In fact, Campaign Life Coalition holds the March for Life in Ottawa each year on or around May 14, the anniversary of the House of Commons’ passing the Omnibus Bill.  The Ottawa event draws around 25,000, by far the largest pro-life event in Canada, while other marches across Canada add another 5,000.

The bill amended the Criminal Code, which had classified abortion as a kind of homicide, exempting abortionists from prosecution when they did the abortions at a designated hospital if a panel of three doctors had agreed the pregnancy endangered the mother’s health or life.

But the tribunals operated as rubber stamps, said Hughes. In 1970, more than 11,000 abortions were approved. By 1988, when the Morgentaler ruling threw out Trudeau’s amendments, 72,000 abortions were being done yearly and 1.2 million had been done in total.

Hughes said Canadians should grieve equally for babies killed before and after 1988, but the important date to mark was 1969 when  abortion became legal.

Dr. Henry Morgentaler defied the law and set up free-standing, for-profit clinics in several provinces offering abortion on demand. When convicted in lower courts of multiple homicides, he appealed to the Supreme Court of Canada and, in 1988, he  won.

Abortion promoters at different times laud the Morgentaler decision for “legalizing abortion in Canada,” or because it “finally gave Canadian women true reproductive choice,” or for establishing a constitutional right to abortion.

The pro-abortion movement, according to Calgary lawyer John Carpay, “loves to claim, falsely, that the Morgentaler SCC decision established a constitutional right to abortion..The more that Canadians believe that, the worse off the pro-life movement will be, both legally and politically.”

The real basis for throwing out Trudeau’s law was that it was unequally administered across the country. According to Campaign Life Coalition’s Jack Fonseca, “It was argued the procedures to approve an abortion weren’t as available to rural women as they were to women in cities.”

John Sikkema, legal counsel for the Association for Reformed Political Action, added that some Maritime provincial governments did not designate any hospitals at all for abortions, and, elsewhere, pro-lifers campaigned vigorously to take over hospital boards and then prevented tribunals being set up in them.

But far from bestowing a constitutional right to abortion, said Jim Hughes, “The court recognized Parliament could make laws to protect the unborn child.” This, however, has never been done.

“One half-hearted attempt was made by the Mulroney government but in fact its main purpose was to protect doctors who commit abortions,” Hughes said.