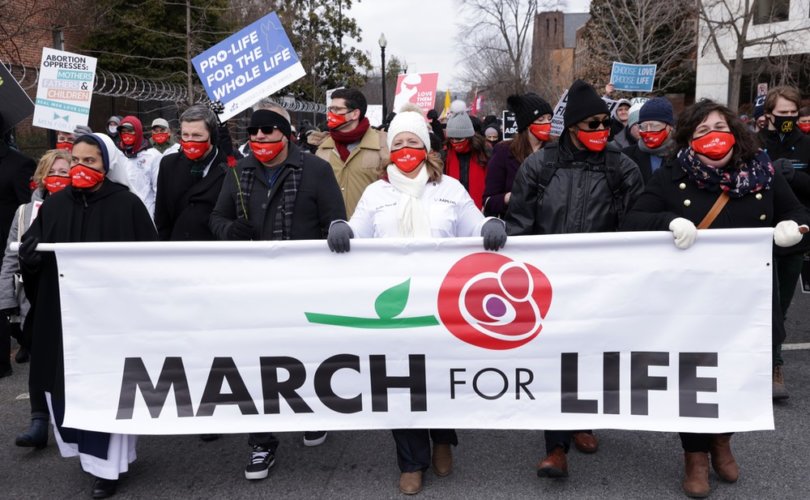 Pro-lifers at the 2021 March for Life, which was canceled except for a small group of pro-life leaders. The 2022 March for Life is on, but Washington, DC has a restrictive COVID vaccine mandate for indoor spaces.Alex Wong / Getty Images

WASHINGTON, D.C. (LifeSiteNews) — As the annual D.C. March for Life quickly approaches, hundreds of thousands of participants and pro-life organizations are in limbo, pondering the potential hardships thrust upon them due to the D.C. government’s about-to-be-enacted proof of COVID-19 vaccination requirement for indoor spaces.

The straight-jacketing new regulations – timed to go into effect just days before the March for Life – could well limit marchers’ access to food, restroom facilities, and shelter from inclement weather and have already caused some important events to be canceled.

The situation is drenched in sick, diabolical irony since the only people who will be 100% free to move in and out of the D.C. hotels, restaurants, and other indoor spaces where the many pro-life meetings, exhibits, and seminars are normally held are those who can prove they have received abortion-tainted COVID-19 jabs. And while the coronavirus itself poses virtually no risk to most of the healthy high school and college kids who make up a large portion of March for Life attendees, the vaccines – which don’t even prevent infection or transmission – do, most notably myocarditis in young men.

‘Millions of lives are on the line, don’t let them win’

While the virulently pro-abortion D.C. mayor’s new regulations seem intended to dissuade pro-lifers from participating in the March for Life, her action could well be a wake-up call for pro-life America, inviting a massive backlash.

“The mayor of Washington, D.C. (who we know is 100% pro-abortion as she literally had us arrested last summer for sidewalk chalking ‘Black Preborn Lives Matter’ on a public sidewalk) is doing everything possible to make the pro-life movement cancel our events surrounding the 49th anniversary of Roe, but WE WILL NOT because this movement and this moment is too damn important,” declared Students for Life president Kristan Hawkins in a Facebook post.

“Literally, millions of lives are on the line as we begin working in our states to secure a post Roe future,” she continued.

“I think the Lord has created the perfect opportunity for the pro-life movement to protest this immoral government that sanctions, protects, and funds the daily mass murder of preborn children,” said pro-life activist Father Stephen Imbarrato, and which “then wants to mandate that we somehow become complicit in that by taking this vaccine.”

“And so I think that the combination of events that have been presented lends itself to some type of peaceful and prayerful protest,” Imbarrato told LifeSiteNews.

“Not just a march, not just a walk, exhibit, gala, but a protest,” he said.

Imbarrato explained that the March for Life tends to be more of a celebration than a solemn protest of the daily mass murder of not-yet-born children. This year is the perfect opportunity for pro-life Americans to set the right tone and objectives for the March, especially “with an apostate mass murderer in the White House who defies the faith.”

For the time being, however, pro-abortion Democrat Mayor Muriel Bowser’s new regulations are having their intended effect: Throwing the pro-life movement into a frenzy, causing division, making life difficult for the event’s planners, and causing fracture lines within the national pro-life coalition.

Is it worth the risk to send my kid?

“The March for Life is important for young people to experience in order to solidify their pro-life beliefs,” said one Midwest parent who did not want to be identified. “Kids do car washes and bake sales all year-round in order to make the trip possible, and parents scrimp and save.”

“But if you’re the parent of a teenager now do you really want to put them on a bus for a 20-hour ride to Washington, D.C. for the March for Life, knowing there’s so much uncertainty as to how the kids will be treated by business owners and the D.C. government?” she wondered.

The mom also said she hadn’t forgotten how quick March for Life organizers were to throw innocent young high school student Nick Sandmann under the bus.

“The grassroots passion for the pro-life cause should not be underestimated,” she continued. “You shouldn’t play with the lives of a half million people.”

“How could the Mayor not know that pro-lifers are among those least likely to be vaccinated, due to concerns that fetal cells were used in the vaccine?” asked Ruth Institute President Dr. Jennifer Roback Morse, Ph.D.

“The Ruth Institute is completely disgusted with the transparently heavy-handed tactics of the D.C. Mayor’s office in interfering with the biggest pro-life event in the nation. It’s hard to believe that the timing of the mandate, which goes into effect several days before the march, is a coincidence,” said Jennifer Roback Morse. “Rather, it looks like a deliberate tactic by a pro-abortion politician to throw a monkey wrench in a week of pro-life events.”

At the same time, Morse, praised Students for Life of America (SFLA) for their perseverance and pluck in planning to stay the course and hold their National Pro-life Summit on January 22, in spite of the new restrictions. SFLA staff along with hotel employees will be checking attendees’ vaccine papers but allowing in unvaccinated individuals who articulate or show a written religious exemption. Those individuals will be required to take a self-administered rapid COVID test, provided for free by SFLA.

“We appreciate the fact that Students For Life have not censored themselves or canceled themselves,” said Morse. “Rather, these young people will be there, being trained to stand for life more effectively, in spite of the obstacles placed in their way by people who ought to know better.”

Morse concluded: “If these courageous young people can put themselves on the line and show up in spite of the difficulties, be assured that the Ruth Institute will stand with them.”