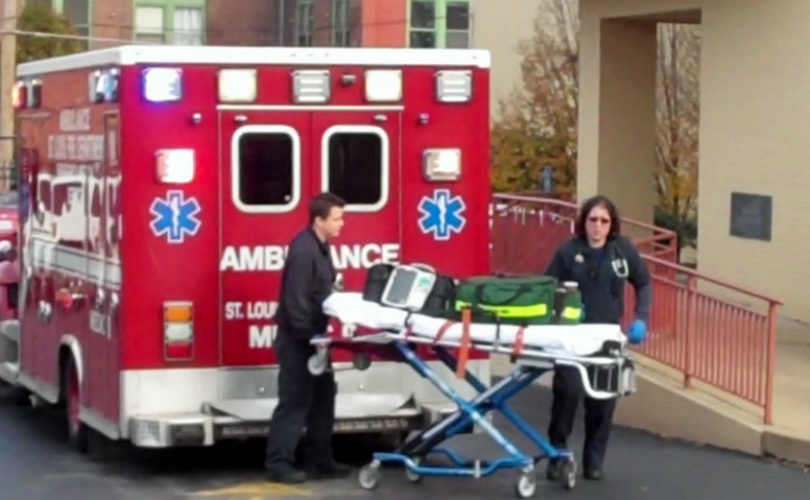 Paramedics respond to a call at abortion center in St. Louis MO.site:abortiondocs.org clinic

March 22, 2018 (LifeSiteNews) – Pro-life advocates are criticizing a new paper claiming that abortion is so overwhelmingly “safe” that abortion-specific regulations in many states are “unnecessary.”

The National Academies of Sciences, Engineering, and Medicine released the 240-page paper, titled “The Safety and Quality of Abortion Care in the United States,” this week. The paper, funded by organizations who have made charitable donations to Planned Parenthood, purports to provide a “comprehensive review of the current state of the science related to the provision of safe, high-quality abortion services in the United States.”

It evaluated the four main abortion procedures used in the United States—medication, aspiration, dilation and evacuation (D&E), and induction—on a range of criteria, including safety and effectiveness.

The paper found that all four methods were “clearly safe.” Critics point out, however, that the paper ignored the safety of the preborn baby when making this claim. The paper also failed to mention the hundreds of documented women (here and here) who have died as a direct result of having a legal abortion.

“Abortion can harm women immediately with the risks of bleeding and damage to their womb and other pelvic organs,” she said. Harrison underscored how abortion has been associated with harming women “psychologically, increasing their risk of suicide, drug abuse, and hospitalization from depression.”

The paper frowns on abortion regulations. In “many parts of the country, abortion-specific regulations on the site and nature of care, provider type, provider training, and public funding” only serve to “diminish this dimension of quality care.” Such regulations “limit the number of available providers, misinform women of the risks of the procedures they are considering, overrule women’s and clinician’s medical decision making, or require medically unnecessary services and delays in care.”

The paper also found that abortion could be reliably provided in the clinics and office-based settings in which 95% of abortions are already performed, rather than hospitals. It further claimed there was no evidence supporting the need for abortion facilities to have admitting privileges at nearby hospitals, and abortion did not increase a woman’s risk of “secondary infertility, pregnancy-related hypertensive disorders, abnormal placentation (after a D&E abortion), preterm birth, or breast cancer.”

The report did acknowledge, however, that having two or more aspiration abortions increased the risk of giving birth before 28 weeks in a future pregnancy.

A range of medical evidence, however, has linked abortion to increased risks of death, future preterm births, other future pregnancy complications including miscarriage, breast cancer, and mental health problems including suicide, depression, trauma, and behavior such as eating disorders, drug abuse, divorce, and chronic relationship problems.

Organizations such as Silent No More exist to help women tell their stories of the spiritual and emotional trauma they experienced when having an abortion.

The report went so far as to claim that the only real threats to the safety of abortion-seeking women are pro-life laws, which supposedly “create barriers to safe and effective care.” Abby Johnson, a former Planned Parenthood worker who is now a prominent pro-life activist, denied that any pro-life safety regulations on the books increase the danger of having an abortion. “Any surgery requires pre-op. Abortion should be no different,” she said.

In a statement to LifeSiteNews, Students for Life of America President Kristan Hawkins questioned the reliability of any of the report’s findings, noting that such studies are dependent on data voluntarily reported by the abortion industry itself. California, Maryland, Massachusetts, New Hampshire, New Jersey, Rhode Island, and Wyoming do not report any abortion data to the federal government.

“As any good reporter knows, you need multiple sources to verify a story,” she said. “What we have is the word of abortion partisans, and not real, verifiable data. It’s pathetic to play politics with women’s health by refusing to require accurate reporting and real tracking of the harms of abortion, relying on the word of abortion advocates.”

Further calling the authors’ impartiality into question is a statement by a co-chair of the committee that wrote the study. Ned Calonge told NPR that pro-life policies “mandate clinically unnecessary services like pre-abortion ultrasounds.” In reality, ultrasound laws are meant to represent the humanity of the preborn child to be aborted, and pro-lifers do not claim ultrasounds serve a strictly “clinical” purpose.