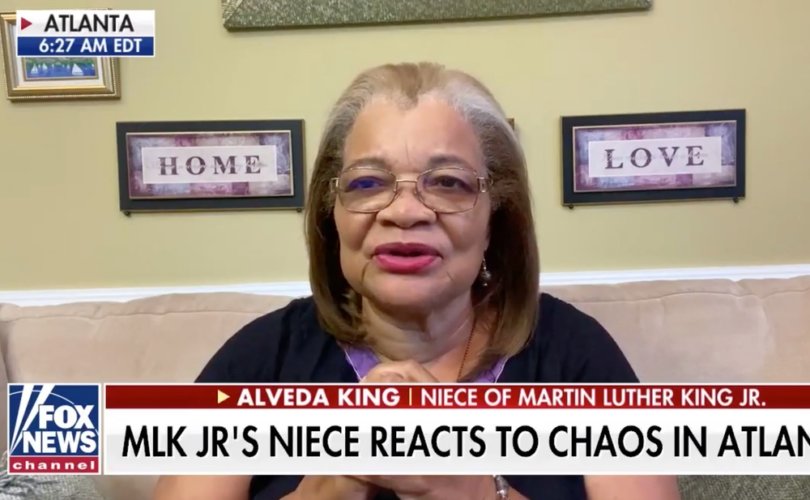 ATLANTA, George, June 1, 2020 (LifeSiteNews) ― Pro-life leaders have denounced both the unlawful killing of George Floyd while in police custody and the violence that has broken out across America in response.

George Floyd, 46, died while police officer Derek Chauvin, 44, kneeled on his neck in a Minneapolis street on May 25. A teenaged employee of Cup Foods grocery store summoned police after Floyd allegedly gave him counterfeit money in exchange for a packet of cigarettes. Floyd’s slow and painful death, during which he begged for his life, has horrified people in the USA and abroad, bringing attention once again to the problem of police brutality.

Chauvin has been charged with third-degree murder and second-degree manslaughter.

Violent assaults on both men and women have been reported and, in some cases, caught on camera phones. Journalists have described being menaced by protestors and shot by rubber bullets, apparently by police. Numerous cities across the U.S. have instituted curfews in an attempt to stem the unrest.

The damaged churches include St. Patrick’s Cathedral in New York City, the Basilica of St. Mary in Minneapolis, and St. John’s Episcopal Church in Washington, D.C.

Although looters initially raided local neighborhood chain stores like Minneapolis’ Target, they have since branched out to attack such luxury shops as the Chanel and Gucci branches in Manhattan and Los Angeles’ Rodeo Drive.

Pro-life advocate Alveda King, niece of Martin Luther King, told Fox News yesterday that her uncle, father, and grandfather, all civil rights heroes, would not condone the lawlessness. She believes that they would tell protestors to go home, pray, and talk to community leaders.

“Certainly this horrendous killing is terrible,” King, 69 said. “However, we can lead from our own hearts and our own community, and say to each other ‘This is bad, but we must stop the violence’.”

In response to her late uncle’s suggestion that “riots are the language of the unheard,” King underscored that such leaders as Donald Trump and Atlanta mayor Keisha Lance Bottoms are indeed “hearing.”

“People of America, your voices are being heard,” she said. “Now let us come together in unity, in faith, in love, and communicate, solve the problem. Violence will not do that.”

Flipping the social justice cry of “no justice, no peace,” King declared that “without peace there can’t be justice.”

“No peace, no justice,” she continued. “As we peacefully communicate―and protest―then people can hear each other and move together towards healing.”

Rev. Patrick Mahoney, a pro-life Presbyterian minister and pastor of Church on the Hill in Washington, D.C., today contrasted pro-life activism to the violence that has followed initially peaceful protests concerning Floyd’s death.

“Operation Rescue had 70,000 arrests for our peaceful pro-life witness with NOT ONE conviction of a violent act at any of our events,” he wrote on Twitter.

“That makes OR, the MOST PEACEFUL social protest movement in America history!”

He stated also that “as a Christian and peacemaker” he was against all violence, including that experienced by George Floyd and that “we are now experiencing on the streets of America.”

Mahoney tweeted on May 28 that his heart was “heavy” after seeing violence break out in Minneapolis.

“My heart is very heavy this morning as I am watching events in Minneapolis,” he wrote.

“Violence is NEVER the answer, even to the most horrific acts of injustice and racism! Pray that God brings justice and healing to this situation.”

Ryan Scott Bomberger of the Radiance Foundation, a charity devoted to affirming human dignity, made a statement over Facebook yesterday condemning both Floyd’s killing and the resultant “thuggery.”

“George Floyd's horrific killing deserves better than this SJW/MSM justified thuggery,” he wrote. “Yes, THUGS. White, black or any hue in between who loot, destroy & cause chaos.”

Bomberger stated that police who abuse their power “regardless of pigmentation” must be held accountable “not just fired.” He also noted that looting and arson do not make abusive police officers accountable.

“Sorry, anarchists. Stealing a high-def TV or setting businesses on fire won't do that,” he wrote. “It just creates more injustice and causes harm to those not responsible, in any way, for the wrongs.”

Bomberger, who is mixed race, said that “race hucksters” and “politics” should not dominate the conversation.

“George Floyd's death is a tragedy because he was a human being worthy of dignity but denied the unalienable right to life, liberty and pursuit of happiness,” he wrote.

Today the Radiance Foundation noted that the number of black people killed by the police annually are identical to those killed in utero by Planned Parenthood daily: 250.

“Either #AllBlackLivesMatter or they don't. You can't pick and choose.”

On Saturday Bishop Samuel J. Aquila of Denver, Colorado issued a statement in which he condemned the killing of George Floyd as “horrifying” and “inhumane.”

The bishop asserted that racism “has no place in the Gospel message or any civil society.”

“The Catholic Church has always promoted a culture of life, but too often our society has lost its sense of the dignity of every human being from the time of conception until natural death,” Aquila, 69, said.

“Every Catholic has a responsibility to promote the dignity of life at every level of life. Too many have made their god their ideology, political party, or the color of their skin, and not the Gospel of Life and the dignity of every human being.”

The bishop demanded justice for Floyd but condemned the violence rocking American cities as advancing the “culture of death.”

“…The violence that we have seen throughout the streets of Denver and other cities in our country only ​advances a culture of death and hatred,” he stated.

“Violence against innocent people has no place in a civil society and must come to an end.”

Several commentators have allegedly identified instigators of the violence overshadowing peaceful protests with the anarchist group known as “Antifa”. Claiming to be a vigilante force against neo-Nazis, Antifa is a loosely-knit international organization of left-wing activists characterized by facemasks, black clothing, and street violence.

Yesterday President Trump tweeted that he was going to take action against the group.

“The United States of America will be designating ANTIFA as a Terrorist Organization,” he wrote.