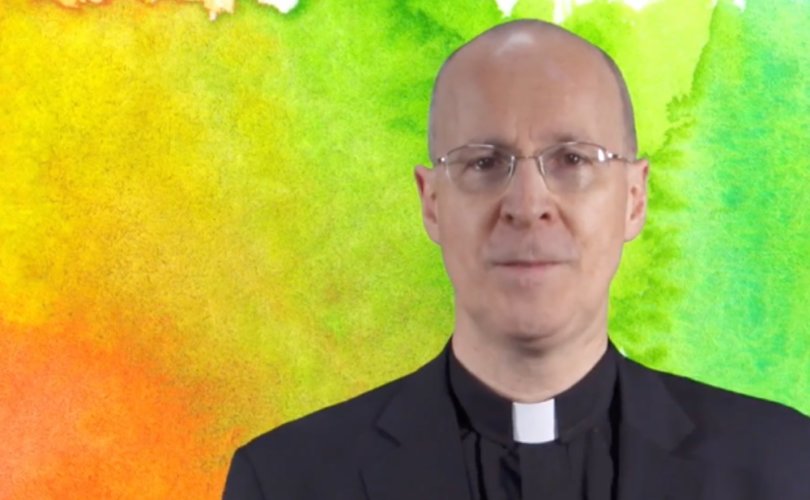 June 12, 2018 (LifeSiteNews) – Pro-life Catholics and pro-family leaders are outraged and disappointed that the 2018 World Meeting of Families will feature LGBT-pushing Jesuit Father James Martin and that the event’s agenda has so far made no mention of abortion, even though it’s taking place in a country that just voted to legalize the lethal practice.

The World Meeting of Families (WMF), not to be confused with the World Congress of Families, is a massive Vatican-sanctioned conference that takes place every few years. The last one was in 2015 in Philadelphia. Pope Francis attended.

The Pope will also attend this year’s WMF, which is in Dublin in August.

“It must sicken the heart of every faithful Catholic to learn that a keynote address will be given by the controversial priest Father James Martin,” Anthony Murphy of the Lumen Fidei Institute told LifeSiteNews. “With this choice of speaker the Archbishop of Dublin once again signals his support for the homosexual agenda and he assists the promotion of confusion and dissent in the Church.”

The Lumen Fidei Institute is hosting an alternative event, “A Conference of Catholic Families,” in Dublin as the WMF takes place. That conference will use Pope Pius XI’s encyclical Casti Connubii as its starting point. Casti Connubii is sometimes called the “original Humanae Vitae,” because it reaffirmed Church teaching on marriage and procreation, contraception, and sexuality decades before Pope Paul VI’s encyclical.

Father Martin “causes scandal wherever he goes,” said Austin Ruse, president of the Center for Family and Human Rights. “It is deeply disappointing but not at all surprising he was invited to this event.”

“Father Martin’s record is not a good one; rather than leading same-sex attracted people to Christ he encourages them to live out their disordered attraction by telling them that the Church approves of their lifestyles,” said Murphy. “Martin tells sexually confused or compromised men and women that there is nothing wrong with what they do. He tells them God made them same-sex attracted in defiance of the clear teaching of the Church that homosexuality’s origin is psychological.”

‘He’s either lying or he’s clueless’

Father Martin uses his large social media platform to promote homosexuality and lobby the Church to change its teachings on homosexuality. The Jesuit was appointed to be a Vatican communications consultant in 2017. Before that, he had already begun to rise to fame as one of the most vocal supporters of homosexuality in the Church.

His notoriety and praise from left-wing bishops has only increased since then. He uses speaking engagements, media appearances, and his book Building a Bridge (based off of a 2016 talk he gave to the dissident group New Ways Ministry) to suggest Catholics who agree with Church teaching on human sexuality are bigots.

Father Martin says homosexual priests should “come out” about their sexual proclivities, but has publicly declined to say whether he himself is gay.

Father Martin announced on Monday that the Vatican invited him to speak at the WMF. The title of his talk is “Exploring how Parishes can support those families with members who identify as LGBTI+.”

Archbishop Eamon Martin and Dublin Archbishop Diarmuid Martin, who are neither related to each other nor Father Martin, held a press conference Monday about the latest program updates.

When LifeSiteNews inquired with Archbishop Eamon Martin, the Primate of all Ireland, about Martin being invited to speak, his spokesman said, “The Pastoral Congress programme has been approved by the Dicastery for Laity[,] Family and Life.”

“In 2015, I was raked over the coals for suggesting that the WMF was being co-opted by the LGBT movement to push a homosexual agenda,” Michael Hichborn, President of the Lepanto Institute, told LifeSiteNews. “Now, they're not even hiding the football!”

LifeSiteNews spoke with Robert Oscar Lopez, who was raised by two lesbians and for a time lived as a gay man, but now identifies as ex-gay and is married to a woman, about the Jesuit’s planned speech and record of LGBT advocacy.

“I know what it was like to be a young man and to be misled by people who had that kind of authority and prestige,” said Lopez.

“I’ve had enough gay sex to know that it is unhealthy, it’s painful, it does not bring joy to someone’s life,” he said. “There’s no way your body is designed to do that for your entire life.”

The theme of the 2018 WMF is Amoris Laetitia, the controversial papal exhortation that has forced prominent prelates to issue statements affirming Catholic morality while some of their brother bishops promulgate guidelines allowing for what the Church has always taught is sacrilege.

Casti Connubii, the document upon which “A Conference for Catholic Families” will be centered, is crystal clear about sexual ethics and Catholic morality. Pope Pius XI blasted contraception, abortion, and divorce in that encyclical.

The below topics, including Father Martin’s, are listed as “highlights” of the WMF:

“It is extraordinary that no mention has been made of the recent abortion referendum especially because at the same time the World Meeting of Families is taking place our politicians will be pushing through legislation to kill the unborn,” said Murphy. “It is remarkable for an event which is supposed to be about the family that the most vulnerable, the most defenceless and the most marginalised is ignored – namely the aborted child.”

“There is no mention of [counseling] to assist women considering abortion nor is there any mention of post abortion [counseling] for those women suffering with the trauma of termination,” he continued. “If the Church in Ireland cannot speak up for the plight of the unborn child then we really have reached rock bottom. The Catholics who voted for the killing of babies by their mothers have scornfully rejected Pope St. John Paul [and] St. Teresa of Calcutta and the Archbishop of Dublin has betrayed these great saints by his silence and weakness in the face of evil.”

An advisor to a bishop in that part of the world told LifeSiteNews he doesn’t understand why the WMF didn’t invite someone from the Courage apostolate or the creator of the documentary The Third Way.

Similarly, Ruse said Father Martin “undermines the great work of groups like Courage and he confuses young men who may be same-sex attracted.” The international pro-life leader said he hopes “that faithful Catholics in Ireland will strenuously object to [Fr. Martin’s] appearance.”

“The papal visit to Ireland will be [partly] funded by the State,” noted Murphy. In light of the WMF’s ignoring of the pro-life issue and invitation to Father Martin, “also with the deafening silence from the Vatican on the abortion referendum, it must be asked what price has been paid for the thirty pieces of silver from the Irish government,” he said.

“In short is it so important for the Church to have photographs of the Pope shaking hands and smiling with Irish politicians even if this means remaining silent on the defence of the unborn and refusing to speak about the Catholic Church’s beautiful teachings about the goodness and inherent purpose of human sexuality?” asked Murphy. “If so, then the WMOF is little more than a meaningless cosmetic exercise which will do nothing to stop the downward trajectory of the Church in Ireland.”