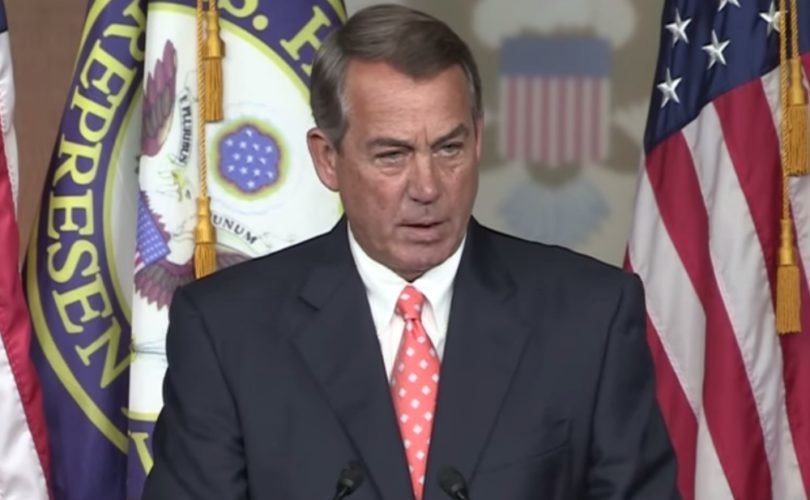 WASHINGTON, D.C., September 25, 2015 (LifeSiteNews) – Pro-life leaders and presidential candidates had a mixed assessment of John Boehner's tenure as Speaker of the House, but they agree on want they want from his successor: Someone willing to fight for their principles no matter what the cost.

Boehner, who was elected to the House in 1990 and became speaker 20 years later, announced that his Congressional career would end on October 30.

The pro-life movement had a sometimes contentious relationship with the speaker from Ohio, a dependable pro-life vote who nonetheless was faulted for not using all the power of his office to promote a pro-life, pro-family agenda.

“During his time as speaker we’ve seen an unprecedented level of pro-life activity, including fights to stop taxpayer funding of abortion in Obamacare, to defund America’s largest abortion business, Planned Parenthood, to strengthen the Born-Alive Infant Protection Act, and to protect children and women at risk during painful late abortions after five months,” said Susan B. Anthony List president Marjorie Dannenfelser. “We thank Speaker Boehner for what he was able to accomplish and wish him the best in his future endeavors.”

Carol Tobias, president of National Right to Life Committee, called Boehner a “dedicated ally” who has “demonstrated an unwavering commitment to the cause of life. All of us in the right-to-life movement are grateful to Speaker Boehner for his leadership in our common cause.”

However, numerous pro-life leaders protested outside his office – often being locked outside – to force Boehner's hand to bring pro-life legislation to the floor. Their efforts secured Boehner's moving forward the Pain Capable Unborn Child Protection Act and lent strength to conservative members' demands that Planned Parenthood be defunded.

One of those leaders, Kristan Hawkins of Students for Life of America, drew attention to Boehner's resignation statement to show his priorities – which placed the “institution” of Congress, as he called it, above all – were often misplaced.

“It’s my hope that the House will be led by a fighter, by someone who doesn’t put ‘institution’ above all but ‘life’ above all,” Hawkins told LifeSiteNews.

Another who had pushed Boehner for more action on a pro-life legislative agenda, Operation Rescue President Troy Newman, told LifeSiteNews, “Although the speaker has been vocally pro-life, he has always been against” a potential government shutdown over defunding Planned Parenthood “and putting it on the president's desk. And we know there are no coincidences in God's economy.”

“Yesterday, the Catholic pope came to speak a word of life, and today the speaker resigns,” Newman says. “I trust this is an answer to prayer and that the Congress will soon get about the work of saving innocent children from death.”

Presidential candidates weighed in on the announcement, as well. Donald Trump said it “was good; it was time” for Boehner to quit. Marco Rubio said it was time for new leadership, and Ted Cruz said he had long been at odds with the Speaker.

Weariness with his party's grassroots – and their representatives – threatened to force Boehner out against his will. Now those constituents hope for a House Speaker less open to compromise and weakness.

“American voters who put the Republican Party into the majority have grown weary of GOP leaders running into these political battles waving a white flag,” said Tony Perkins, whose Family Research Council is hosting the Values Voters Summit in Washington this weekend. “We welcome Republican leadership that understands that some values, like life, religious liberty and national defense are worth fighting for — no matter what.”

California Republican Kevin McCarthy, who is currently the second highest Republican leader in the House, has been seen as a likely successor.

Longtime conservative activist Richard Viguerie wrote, “Conservatives are not a wing of the GOP or an interest group — we are the Republican Party. Boehner's resignation shows that there is a time limit on how long a small minority can run roughshod over the rights and interests of America's conservative majority.”

Former Attorney General of Virginia Ken Cuccinelli, who now heads the Senate Conservative Fund, said Boehner's Speakership was “hostile towards conservatives and our principle. Rather than fighting President Obama and his liberal policies, Speaker Boehner embraced them and betrayed his party’s own voters.”

“The next Speaker of the House must be willing to defend the Constitution and stand up for the principles of freedom that make our nation great,” he said.

U.S. House Speaker Boehner: Government shutdown will not help the pro-life cause
A tale of two speakers: Pelosi vs. Boehner