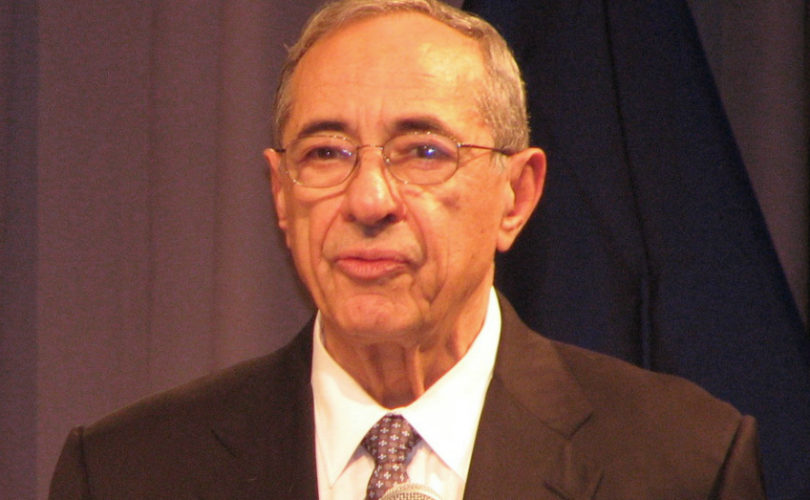 A Catholic, Cuomo was known for his pro-abortion views, including a public dispute with New York Archbishop John O’Connor over Cuomo’s assertion that his obedience to the Catholic faith was not at risk from his support for abortion.

In a famous 1984 talk at Notre Dame, titled “Religious Belief and Public Morality: A Catholic Governor’s Perspective,” Cuomo argued that the prevalent acceptance of abortion among Catholics and society justified his support of legalized abortion.

The speech gained Cuomo notoriety when he coined the infamous statement that he was personally opposed to abortion but didn’t feel he could tell others what to do, a pronouncement pro-lifers regard as having given cover to every Catholic pro-abortion politician in the 30 years since.

The line of people waiting to pay respects at Cuomo’s wake Monday at a Madison Avenue funeral home stretched more than a block. Numerous celebrities and politicians were among the mourners, including prominent pro-abortion politicians such as Vice President Joe Biden, New York Sen. Charles Schumer and House Minority Leader Nancy Pelosi.

Cuomo’s funeral was held at St. Ignatius of Loyola Church in Manhattan, and officiated by the parish’s pastor, Father George Witt, SJ, who said Cuomo had been clear in his desire for a simple funeral with minimal fanfare. The funeral was also attended by numerous well-known supporters of abortion, including New York Mayor Bill de Blasio, former mayors Michael Bloomberg and David Dinkins, Attorney General Eric Holder, and Bill and Hillary Clinton.

Cuomo’s son, Gov. Andrew Cuomo, who had been sworn in for his second term as governor hours before his father’s death, offered the funeral eulogy, saying the elder Cuomo was, “the keynote speaker for our better angels.”

In addition to following in his father’s footsteps as governor, Andrew Cuomo has also publicly dissented from Church teaching in his political career, with his support for abortion, same-sex “marriage,” and many other issues.

“He was not interested in pleasing the audience, not in his speech, not in life,” Gov. Cuomo said of his father. “He believed what he believed, and the reaction of the audience or the powers that be or the popularity of his belief was irrelevant to him. Mario Cuomo was at peace with who he was and how he saw the world. This gave him a great strength and made him anything but a typical politician.”

As Mario Cuomo’s life on earth was celebrated in New York and the media, his historic obstinate support for abortion in conflict with his Catholic faith stirred concern for his eternal life among pro-life veterans.

For American Life League president Judie Brown, Cuomo’s death after decades of flouting the Church in his political position punctuates the refusal of Church heads to enforce or even speak about Canon 915.

The true onus regarding Cuomo’s salvation rests with Church leaders who failed to challenge him in his drift from Church teaching, Brown told LifeSiteNews.

Cuomo established himself as the pro-abortion Catholic in history, Brown stated, creating a dangerous situation for himself and others who choose to emulate him.

People saw him taking Communion in defiance of Church morals and assume they can as well, she said.

“They see him supporting abortion and think, ‘He does this and goes to Communion – so can I,’” Brown said. “That’s scandalous and it has lead so many innocent people astray about what the Church teaches.”

Responsibility for the result lies both with Cuomo and his Catholic shepherds, Brown told LifeSiteNews.

Father Frank Pavone, national director of Priests for Life, said Mario Cuomo’s Catholic funeral was not unexpected given the current approach of Church leaders to abortion.

“The climate in the Church today makes it extremely unlikely that any funeral will be denied to anyone,” Father Pavone told RenewAmerica. “And especially when it comes to abortion.”

Massachusetts Senator Ted Kennedy, a strident abortion advocate, was given a public Catholic funeral in 2009, despite his avid promotion of abortion, homosexual “marriage” and embryonic stem cell research, while in 2002, the Church withheld a public funeral from organized crime boss John J. Gotti.

“We have a tremendous blind spot both on the part of the Church and the State that abortion is a holocaust of greater proportions than humanity has ever seen,” said Pavone. “We've abstracted and blunted the urgency of this problem to unprecedented degrees. And therefore the very starting point by which we try to make decisions about dealing with abortion supporters, both in life and in death, is compromised.”

Noting that Mario Cuomo's funeral occurred the same day that members of the 114th U.S. Congress took their oath of office, Father Pavone said, “The first purpose of government is to protect the right to life, and the government has no authority to exclude any human being from that protection.”

Brown expressed dismay in her conversation with LifeSiteNews over the missed opportunity for Catholic pastoral teaching that was available throughout Mario Cuomo’s political career and came to a close with his death.

“I love the Lord and I love the Eucharist,” she said. “And I feel very bad for all the Catholics that have been misled over the years.”