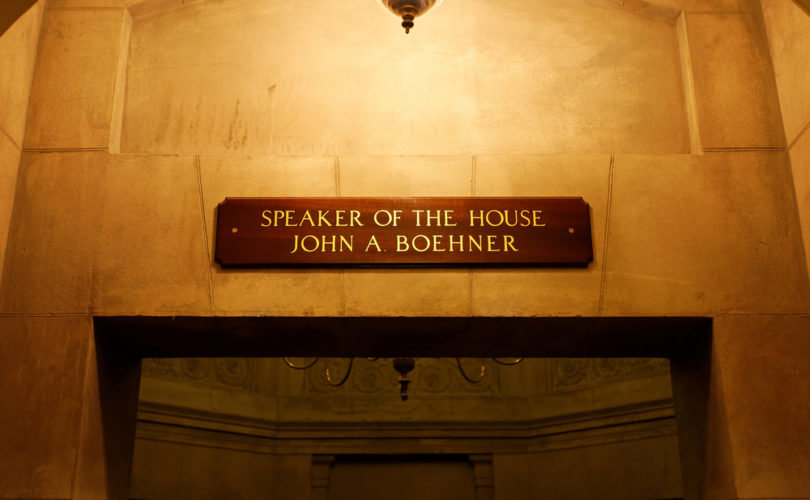 A sign over an entrance to the Speaker's Rooms in the US Capitol building.Katherine Welles / Shutterstock.com

Troy Newman of Operation Rescue, Rev. Patrick Mahoney of the Christian Defense Coalition, blogger Jill Stanek, and three other activists — all women — are leading a sit-in at the Capitol Hill office of House Speaker John Boehner, R-OH. Their goal is to pressure the speaker and the rest of the GOP House leadership into passing H.R. 36, the “Pain Capable Unborn Child Protection Act,” through the House.

“We have two goals,” Stanek told LifeSiteNews. “One is to provide political pressure for Republicans to move H.R. 36 through the House. The secondary goal is to draw attention to the babies we are trying to save. As Republicans dither, babies are dying excruciating deaths.”

H.R. 36 would ban most abortions that currently take place after 20 weeks' gestation. If signed into law, it could prevent as many as 18,000 abortions per year.

The House, which passed a similar bill in 2013, has faced a major backlash from pro-life leaders for not passing H.R. 36 on January 20. House leadership had previously promised that the Act's passage would be timed to the annual March for Life, which this year drew at least 200,000 people.

However, a number of Republican women said they opposed the rape exception, which they say was written too narrowly. The bill would allow abortions in the case of rape only when a woman first reports her rape to police.

Republican Rep. Renee Ellmers of North Carolina, who voted for the 20-week ban in 2013, has taken the brunt of the blame by pro-life leaders for first publicly reneging on the bill, then providing her last-minute support for it. Two weeks after the bill failed, Ellmers was criticized after she claimed that critic reactions were “abhorrent and childish.”

It has also been reported that one of H.R. 36's original cosponsors, Rep. Marsha Blackburn of Tennessee, was key in the behind-the-scenes effort to scuttle the bill. Blackburn spokesperson Mike Reynard, however, told LifeSiteNews that such reports were incorrect.

“Congressman Blackburn remains the primary co-sponsor of HR 36 and remains committed to passage,” said Reynard. “She is continuing to work with the bill sponsor, Rep. Trent Franks, and others to find language that is going to work. Many of the reports from anonymous sources were wrong and did not appropriately reflect the involvement of Mrs. Blackburn or other pro-life women.”

Stanek said the probable failure of the ban to pass into law in the current Congress — Senate Democrats will likely filibuster the legislation, and President Obama has declared his opposition — won't deter her effort. “We'll cross that bridge when we come to it,” said the former nurse. “I've dealt with Obama before, in Illinois, but that does not mean we don't give him an opportunity to do the right thing.”

“There's no such thing as a hopeless cause,” said Stanek.

LifeSiteNews reached out to several top Republican offices for comment about whether H.R. 36 was on the legislative calendar, as well as for information on any possible changes to the bill. Neither the speaker's office nor the office of House Majority Leader Kevin McCarthy, R-CA, responded to these questions. However, the communications director for Boehner's personal office, Olivia Hnat, told LifeSiteNews, “Congressman Boehner is 100 percent pro-life and, indeed, the most pro-life speaker in the history of the House. The Pain Capable Unborn Child Protection Act remains an important priority for the pro-life majority that he leads in the House.”

Likewise, a GOP leadership aide said that “the Majority Leader is actively working with the pro-life community and our conference to find a path forward so that the House can pass this important legislation.”

House Judiciary Committee Chairman Bob Goodlatte, whose committee passed H.R. 36 in January, told LifeSiteNews, “I strongly support protecting innocent life.  As a country, we must speak for those who cannot speak for themselves and allow them the fundamental human right to be born into this world.  I will continue to support all efforts to move pro-life legislation.”

The sit-in leaders told LifeSiteNews that they would continue the protest even after finding out that Boehner's office, which is located in Longworth House Office Building, is locked to visitors.