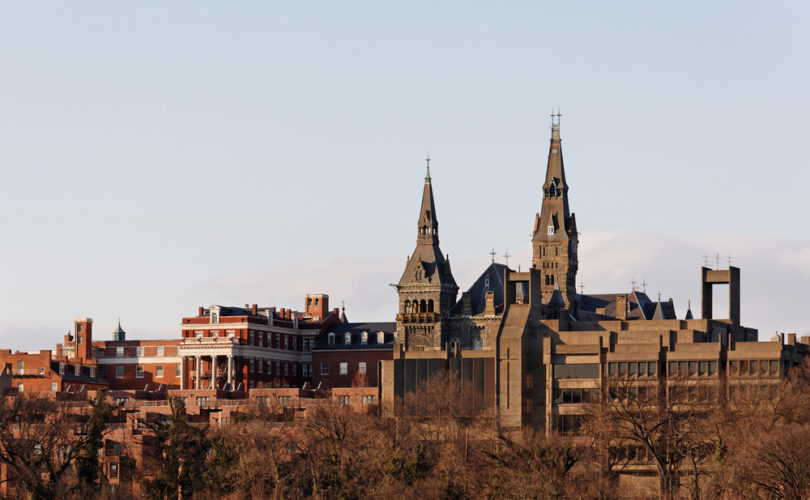 March 9, 2016 (CardinalNewmanSociety) — The leaders of several national pro-life organizations were extremely critical of the administration of Georgetown University in statements published today over Georgetown’s defense of allowing Planned Parenthood CEO Cecile Richards to speak on campus in April.

The Newman Society broke the news on March 2 that the Lecture Fund at Georgetown invited Richards to campus. The Lecture Fund “is a non-partisan student-run organization that exists to enrich the academic experience of the Georgetown community,” according to the group’s website. “The Lecture Fund strives to bring speakers to Georgetown’s campus to enlighten, educate and, occasionally, entertain.” Richards is not being paid to speak.

The University issued a statement the next day defending its decision to allow Richards to speak on campus, citing Georgetown’s commitment to “the free exchange of ideas.”

“As the nation’s oldest Catholic and Jesuit university, Georgetown University is proud to be a university that deeply values our faith tradition and that encourages the free exchange of ideas,” according to the statement. “We respect our students’ right to express their personal views and are committed to sustaining a forum for the free exchange of ideas, even when those ideas may be difficult, controversial or objectionable to some.”

But Priests for Life National Director Father Frank Pavone told the National Catholic Register in an interview published today that allowing Richards to speak on campus “is not a matter of free speech or academic freedom.”

“The abortion controversy is not about viewpoints, but about victims,” he said. “It is not simply about beliefs, but about bloodshed.”

“Georgetown University’s defense for inviting the head of the largest criminal enterprise and child-killing industry in America adds more evidence to the argument I advanced in my new book, Abolishing Abortion: that the debate over abortion — even within the Church — has become far too abstract for our own good,” Fr. Pavone told the Register.

Fr. Pavone also suggested that Georgetown is violating its own free speech policy by allowing Richards to speak.

According to the University’s Speech and Expression Policy, there are some limits the administration is willing to impose on free speech.

“The right of free speech and expression does not include unlawful activity or activity that endangers or imminently threatens to endanger the safety of any member of the community or any the community’s physical facilities, or any activity that disrupts or obstructs the functions of the University or imminently threatens such disruption or obstruction,” the policy states. “Moreover, expression that is indecent or is grossly obscene or grossly offensive on matters such as race, ethnicity, religion, gender, or sexual orientation is inappropriate in a university community and the University will act as it deems appropriate to educate students violating this principle.”

The policy goes on to stipulate that “these qualifications are naturally subject to interpretation,” and students can file an appeal to the vice president for student affairs through a “Speech and Expression Committee” if they believe the policy has been misapplied.

Fr. Pavone said, “Cecile Richards’ speech, as well as actions, endanger and imminently threaten the unborn, including those whose parents may be on campus,” and he argued that the “grossly offensive language of Cecile Richards and Planned Parenthood toward the unborn, refusing to recognize their humanity and basic rights, based on age and dependency, is likewise inappropriate.”

Live Action President Lila Rose told the Register that giving Richards a platform at Georgetown is “gravely wrong” and “antithetical to the university’s Catholic identity.”

“Over 320,000 children a year have their lives ended [by Planned Parenthood],” she said. “Those children — their stories and the beautiful purpose that God had and the love he had for each of them — are not with us because of Planned Parenthood.”

Rose told the Register that she thought the situation would have been different if Richards was invited to debate a pro-life advocate, “But she has been given a platform to express the extreme pro-abortion position that she upholds.” And she pointed out that Georgetown would likely never allow a campus speaker who represented the Ku Klux Klan or Islamic State.

“Georgetown has the right as a private university to uphold the values of the school. If the school has Catholic values and promotes human rights in general, giving a platform to the most extreme abortion group flies in the face of justice, and it’s really a promotion of abortion, which is a grievous moral wrong as well,” Rose said, adding, “Ultimately, Georgetown is espousing the most violent and unjust ideology of the day, which is the pro-abortion ideology.”

Judie Brown, president of American Life League, also criticized Georgetown in an article posted on the group’s website today. Brown said the invite to Richards “defies logic and common sense,” and she expressed skepticism about the University’s statement in its defense of the invitation that, “Our Catholic and Jesuit identity on campus has never been stronger. Georgetown remains firmly committed to the sanctity and human dignity of every life at every stage.”

“We wonder if, as is the case in so many instances, the actions of a Georgetown-sponsored student group speak volumes about the university — much more so than a lukewarm media statement,” she said. “Georgetown has used this same boiler-plate response for other speakers on campus, including President Obama and Hustler publisher Larry Flynt. Nothing more needs to be said.”

Brown also pointed out: “Just a few days ago Planned Parenthood was exposed in another groundbreaking Center for Medical Progress video. In this video we learn that a California Planned Parenthood affiliate actually ‘alters the abortion procedure, sometimes delivers children ‘intact,’ and provides fetal organs to a company that charges $750 for babies’ brains.’”

“If this is not the personification of evil in our time, what is?” she asked.

Responses From Within the Church

The Archdiocese of Washington, where Cardinal Donald Wuerl is the Archbishop, responded to the controversy surrounding the invite of Richards to speak to students and staff at Georgetown in a statement released to the Newman Society on Monday night. The archdiocese criticized the invitation and what it suggested about the campus culture at the University.

“What we lament and find sadly lacking in this choice by the student group is any reflection of what should be an environment of morality, ethics and human decency that one expects on a campus that asserts its Jesuit and Catholic history and identity,” the statement read in part. “One would prefer to see some recognition by this student group of the lives and ministry, focus and values of people like Blessed Óscar Romero, Blessed Teresa of Calcutta and Pope Francis in place of that group’s seemingly constant preoccupation with sexual activity, contraception and abortion. The Archdiocese of Washington is always open and ready to dialogue with the students, faculty and administration of the University on issues of such significance.”

“The apparent unawareness of those pushing the violence of abortion and the denigration of human dignity that there are other human values and issues being challenged in the world lends credence to the perception of the ‘ivory tower’ life of some on campus. This unfortunately does not speak well for the future,” the statement continued, adding later, “The Jesuit community on campus clearly has its work cut out for it and a long way to go as it tries to instill at Georgetown some of the values of Pope Francis.”

Responding on March 6 to a tweet from Live Action’s Rose about Georgetown, Cardinal Napier said: “If there’s a crisis in the Catholic Church today, it’s the disjuncture between the imperative to live and teach the Gospel and the obsession to be fair and broadminded on moral and critical life issues. Georgetown’s hosting Cecile Richards is an obvious case!”

Cardinal Napier also tweeted on the issue, “Those in authority at Georgetown seem committed to ‘political correctness’ rather than fidelity to the Church!” and, “I also don’t understand why Catholic Students and Staff don't give personal witness to the Faith by taking a firm stand for Life!”

Newman Society President Patrick Reilly told the Register today that even though Georgetown cites the free exchange of ideas in hosting Richards, “There will be no effort to ‘exchange’ any notion of Catholic moral teaching with Cecile Richards.”

“No, Georgetown will sit back and allow a prominent public figure responsible for the deaths of more than 2.8 million babies to spout off to its undergraduates,” he said. “It is one more example of Georgetown’s legacy of Catholic-identity abuse.”