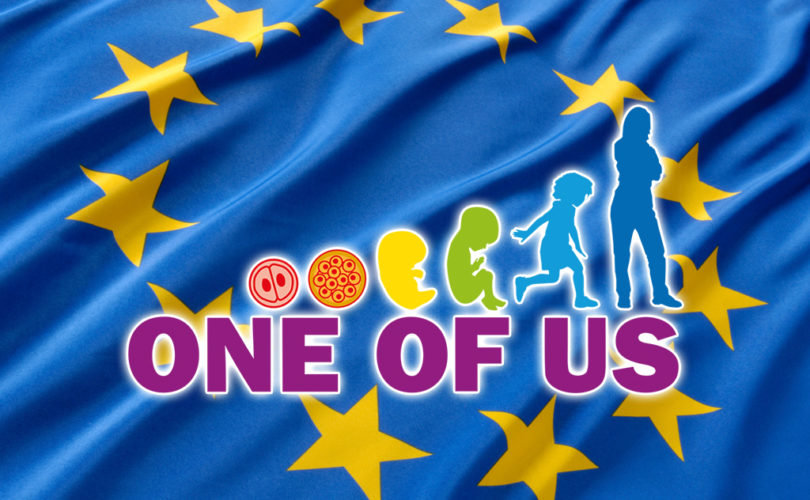 BRUSSELS – After the European Union abruptly halted a massive multi-national pro-life initiative last month, the organizers have vowed to fight on.

The “One of Us” campaign had gathered 1.8 million signatures in support of the proposal for the EU to “recognise the human embryo, from the moment of conception as a human individual, who is ‘One of Us’.”

“Is anyone still surprised if citizens express frustration and contempt with the Brussels bureaucracy?”

But on May 27, the campaign’s organizers received a nine-page letter from the European Commission, the EU’s executive body, stating the EU would continue funding embryonic stem cell research.

“‘One of Us’ is not an ending but a beginning point which shows that the pro-human dignity networks work in each European country – and that we will be taken seriously in the political debate. We will certainly not be silent in the future,” the initiative’s Austrian coordinator, Dr. Gudrun Kugler, told LifeSiteNews.

In a statement June 5, the One of Us organizers said that the Commission’s document failed to address the substance of the initiative, namely the human personhood of the embryo, so they do not consider the matter closed and are considering a formal response that may include a complaint to the European Court of Justice. Other responses will include another initiative currently under way to obtain signatures from physicians, lawyers, and politicians to demand a review.

Máire Geoghegan-Quinn, European Commissioner for Research, Innovation and Science, also responded to the campaign in a May 28 media release. “We have engaged with this Citizens’ Initiative and given its request all due attention. However, Member States and the European Parliament agreed to continue funding research in this area for a reason. Embryonic stem cells are unique and offer the potential for life-saving treatments, with clinical trials already underway.

“The Commission will continue to apply the strict ethical rules and restrictions in place for EU-funded research, including that we will not fund the destruction of embryos,” the commissioner stated.

The day of the ruling, the One of Us organizing board expressed its “strongest indignation” at the dismissal, calling the Commission “deaf” to the requirements of democracy and likely to push more EU citizens into the “Euroskeptic” camp.

“While each initiative draft is controlled upstream by the Commission before being open to signature, the Barroso Commission claims to possess the right of veto downstream, against initiatives having yet successfully obtained the required popular support,” the statement said.

The project had been launched under the auspices of the European Citizens’ Initiative, a participatory democratic mechanism created by the Treaty of Lisbon under which EU citizens can bring matters they consider important before the EU’s leadership. The mechanism requires a minimum of one million signatures from seven EU member states.

The One of Us petition proposal stated, “The EU should establish a ban and end the financing of activities which presuppose the destruction of human embryos, in particular in the areas of research, development aid and public health.”

The project finished with almost twice the required number of signatures from 18 member states. It proposed to establish “juridical protection of the dignity, the right to life and of the integrity of every human being from conception in the areas of EU competence in which such protection is of particular importance.”

Kugler told LifeSiteNews, “The commission simply wiped ‘One of Us’ off the table. This is an arrogant and disrespectful slap in the face of the citizens.”

“Why introduce a form of direct democracy and citizen’s participation if the European Commission had never considered the possibility of changing their policy if demanded?” she added.

Kugler said the dismissal is “part of a larger European phenomenon” of a ruling class who “arrange things amongst themselves” without any regard for public input.

“They divorce themselves more and more from the people. Appeasement and rhetoric are supposed to keep the people from noticing. I hope that the frustration of the citizens will result in a real change towards politics based on principles and a vision centered on human dignity,” she said.

The lawyer JD von Krempach, who works for the European Centre for Law and Justice, wrote May 28 at the Turtle Bay and Beyond blog that the “Soviet-style” veto demonstrates the real value of direct democracy mechanisms.

“This day,” von Krempach wrote, “marks a fundamental shift in the debate around One of Us,” broadening it to include serious questions about what many are calling the EU’s “democracy deficit.”

“One may or may not agree with the initiative’s goals,” von Krempach wrote, “but from now on what is at stake is not any more the abortion issue, but something even more fundamental. With today's silly and misguided communication, the Commission has, with one single shot, sunk the Lisbon Treaty’s feeble attempt to introduce an element of democracy into the EU's constitutional set-up.”

“Is anyone still surprised if citizens express frustration and contempt with the Brussels bureaucracy?”