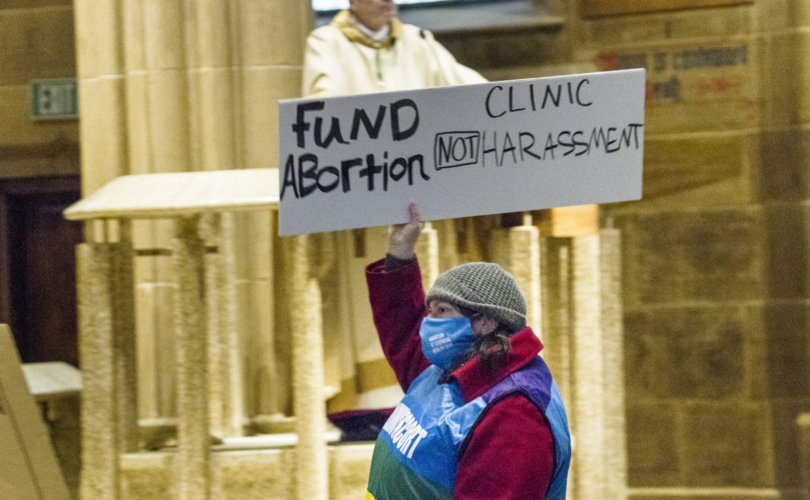 A pro-abortion protester carries a sign through St. Joseph Cathedral in the Diocese of Columbus in front of Bishop Robert Brennan and about 200 attendees at a Respect Life Mass on Friday, Jan. 22.

COLUMBUS, Ohio, January 22, 2021 (LifeSiteNews) — A group of pro-abortion activists this morning stormed St. Joseph Cathedral in downtown Columbus, Ohio, and disrupted a pro-life Mass that was being celebrated at the time.

During Mass, which was celebrated by local Bishop Robert J. Brennan, eight activists rushed into the Cathedral and then paraded around the pews before reaching the altar, displaying posters with messages that read: “Fund abortion, not cops,” and, “Abortion on demand, end Hyde now.”

The Hyde Amendment is a legislative provision barring the use of federal funds to pay for abortion, with the exception of certain cases like incest or rape. Pro-abortion President Joe Biden had long supported the Hyde Amendment, but in 2019 changed his position to appease radical pro-abortion voters.

The mostly female group inside St. Joseph Cathedral chanted, “Two, four, six, eight, this Church teaches hate,” as they marched around the church before scuffling with police and security, who were trying to escort the protestors out.

Some of the approximately 200 Mass-goers were visibly shaken and disturbed by the actions of the protesters. A number of children were in attendance and some were seen crying. Hundreds of Catholic school students throughout the diocese were watching a livestream of the Mass when the protesters interrupted Bishop Brennan’s homily.

“Today during our Respect Life Mass at St. Joseph Cathedral, a group of protesters entered this sacred space in an attempt to disrupt our worship,” Bishop Brennan said in a statement on Friday afternoon. “I am deeply thankful to the Columbus Police, assisted by Diocesan staff, for the quick response without injury to anyone present. I want to express my great admiration and thanks to all those attending the Mass whose respectful and prayerful response reflects the joy, hope, and mercy that marks our pro-life witness. I also apologize to the families present whose children were exposed to this. On this day, in remembrance of the Roe vs. Wade Supreme Court decision, I ask all to continue to pray for the unborn who died, for all those who have experienced the pain of abortion, and for those who cannot understand our divine and steadfast calling to champion this cause.”

The Mass was celebrated as part of the U.S. bishops’ Respect Life program. January 22 marks the anniversary of Roe v. Wade, the Supreme Court ruling that effectively legalized abortion in all fifty states. The “Day of Prayer for the Legal Protection of Unborn Children” is organized annually in dioceses across the country.

On their way out, the pro-abortion group can be heard verbally abusing the security team by screaming obscenities. After they were successfully escorted out, the group remained outside the cathedral, shouting insults back to the congregation inside, including “Jesus hates you,” and “If hell is real, you can burn in it.”

Before Mass had begun, the director of the diocese’s Office for Social Concerns, Jerry Freewalt, said that “(we) are called to respect life and love our neighbor … They’re all made in the image of God.”

He added that “it’s important because, especially in this day and age where there’s a lot of turmoil in our society and in some circles disrespect for each other, this type of Mass we hope will empower Catholics and all people of goodwill to take up that mantle of seeing Christ in each other.”

After the Mass, the pro-abortion protesters harassed and continued to chant and shout vulgaries at pro-lifers who walked two blocks to the Ohio Statehouse from the Cathedral for a Roe Remembrance gathering attended by Bishop Brennan and Cleveland Bishop Edward Malesic, who addressed the crowd before offering a final prayer.

“The fundamental right to be alive is what allows us to love everyone,” Bishop Malesic said. “There is no hatred on this side of the fence. We won’t this argument (against those favoring abortion) by yelling. We will win this argument by the strength of it.”

The small pro-abortion group attempted to drown out the speakers with a bullhorn and a loud siren.

“There are two sides here, and it’s very odd,” Bishop Malesic said. “Let me tell you, if I was an outside observer, I know exactly which side I would choose. There’s beauty and there’s ugliness. There’s peace and there’s violence. There’s love and there’s hatred. There’s life and there’s death.

“The Lord sets before us many choices. He asks us to take sides. May we side with life. May we side with beauty and peace and love and non-violence, including non-verbal violence. May we listen to each other and accompany each other, so that in the end, we will find ourselves where the Lord came to bring us, and that’s to a kingdom of peace and justice.”

The Cleveland bishop told the approximately 150 people at the Statehouse that they were “great inspiration to me.”

A biology major as an undergraduate, Bishop Malesic said Church teaching that life begins at conception is simply Biology 101.

Afterward, the protesters were asked whether they felt emboldened by the election of pro-abortion and self-professed Catholic Joe Biden but would not directly answer the question. Instead, they offered responses directly out of the Black Lives Matter movement.

Biden, whose press secretary touted his Catholicism just two days ago in response to a question about abortion, issued a statement today strongly supporting abortion.

“The Biden-Harris Administration is committed to codifying Roe v. Wade and appointing judges that respect foundational precedents like Roe. We are also committed to ensuring that we work to eliminate maternal and infant health disparities, increase access to contraception, and support families economically so that all parents can raise their families with dignity. This commitment extends to our critical work on health outcomes around the world,” the statement emphasized.

“As the Biden-Harris Administration begins in this critical moment, now is the time to rededicate ourselves to ensuring that all individuals have access to the health care they need.”