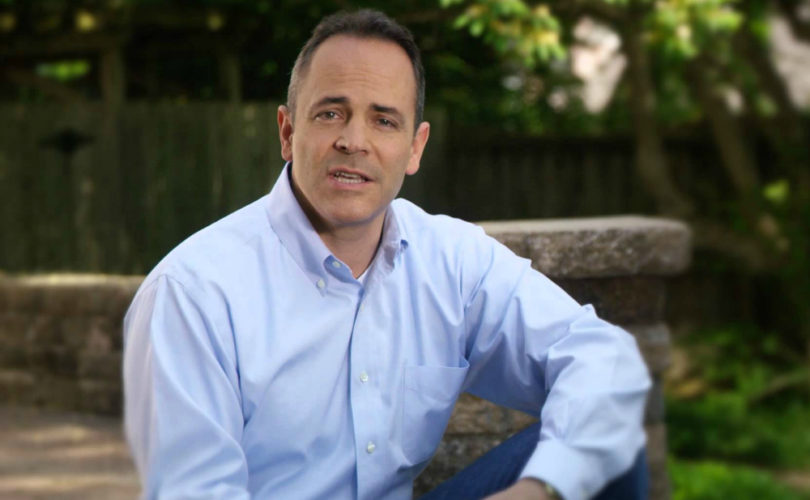 Beshear edged out Bevin 49.2% to 48.8%, with a difference of 5,150 votes between the two. Beshear quickly declared victory, but Bevin refused to concede, citing unspecified “irregularities” and requesting a recanvass of the vote totals.

Following the canvass, however, Bevin acknowledged Thursday that the vote totals were not “significantly” changed and confirmed he would not contest the results further, Politico reports.

“We’re going to have a change in the governorship based on the vote of the people,” he said at the state capitol. “And what I want is to see the absolute best for Kentucky. I’m not going to contest these numbers that have come in. It isn’t fair to throw that on our legislature.”

“This was a tough race, but it is now over,” responded Beshear, who will be sworn in as governor on December 10. “And I appreciate the fact that his administration was already moving forward in a smooth transition.”

Bevin, who was strongly pro-life in office, made abortion a central issue of his campaign against Beshear, accusing him of accepting “blood money” from Louisville abortion center owner Ernest Marshall and of failing to defend pro-life laws in court. Outside ads also painted Beshear as a pro-transgender extremist, accusing him of supporting the so-called Equality Act, which the ad says “would destroy girls’ sports,” and of failing to support legislation that would protect parents’ right to refuse “medical” treatment such as hormone therapy for children.

While Bevin’s defeat marks a blow for pro-lifers and Republicans, the Kentucky GOP won all of its special elections and retains control of the legislature, meaning new pro-abortion bills will not reach Beshear’s desk. Additionally, Republican Daniel Cameron won his race to be the state’s next Attorney General by fifteen points, which suggests that the state’s existing pro-life laws will receive a proper defense against legal challenge.