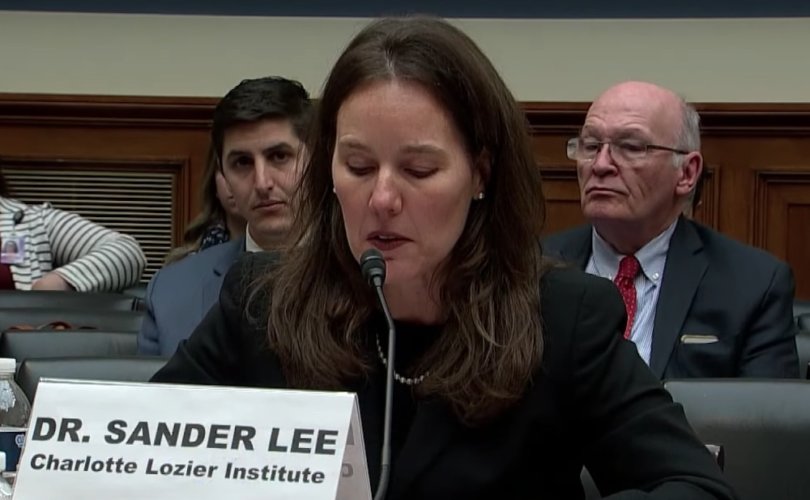 WASHINGTON, D.C., December 14, 2018 (LifeSiteNews) – A pro-life medical scholar appeared before the U.S. House Committee on Oversight and Government Reform this week to explain that tissue from aborted babies is not only unnecessary for researching new medical treatments, but has never been necessary.

Dr. Tara Sander Lee is an Associate Scholar with the pro-life Charlotte Lozier Institute. She holds a PhD in biochemistry, studied molecular and cell biology at Boston Children’s Hospital and Harvard Medical School, and has 20 years of experience with both academic and clinical medicine.

On Thursday, she testified before the committee’s Subcommittees on Healthcare, Benefits, and Administrative Rules and Government Operations for a hearing about ethical alternatives to fetal tissue research, a topic the Trump administration pledged to review last month after it was discovered the federal government was still funding research using tissue obtained from aborted babies.

“Very little research is actually being done that currently relies on abortion-derived fetal tissues,” Sander Lee explained in her prepared testimony. She noted that the National Institutes of Health estimated appropriating $103 million for research involving fetal tissue in 2018, which came to less than 0.4 percent of NIH’s total budget of almost $30 million.

“This is relatively small compared to billions of dollars funding research that does not involved fetal tissue from abortions,” she said, citing the abundance of effective and non-controversial alternatives.

Sander Lee went on to detail how the original Polio vaccine was first developed with monkey kidney cells; how vaccines for Measles, Mumps, and Rubella can be produced with cell lines from chicken eggs, human placentas, human kidney cultures, monkey cells, and chick embryo fibroblasts; how the vast majority of the research currently being done on the Zika and Ebola viruses does not use fetal tissue; and how even the vaccines currently being produced in the United States with fetal tissue are using cell lines from the 1960s rather than newly-obtained tissue from abortions.

Ethical alternatives currently available to researchers “include, but are not limited to, fresh human tissues from adult and pediatric populations, donated and discarded biopsies and surgical specimens, from both living and post-mortem individuals,” she continued. “There are numerous examples of investigators successfully using these ethical alternatives for research and clinical trials for studying the most complex processes, such as brain development and neurodevelopmental disorders, immune response to pathogens, and stroke.”

Researchers can obtain ethical human tissue sources from hospitals, academic institutions, and tissue banks across the United States, she said.

In particular, she highlighted “discarded cord blood from labor and delivery is stored in tissue repositories, because it is a rich and plentiful source of stem cells for research, regenerative medicine, and transplantation,” so much so that it has been used to treat as many as 80 different diseases. Sander Lee also noted that stem cells from placenta, amniotic fluid, and mothers' own bone marrow are showing “tremendous potential” for treating babies before birth.

She also took the opportunity to explain that adult somatic cells (such as from human skin) can be reprogrammed “to make induced pluripotent stem cells (iPS cells) that possess an embryonic-like state.” This coveted quality of pluripotency, or the ability to become other types of tissue, was the original rationalization for destroying human embryos to obtained stem cells.

“Some researchers argue that they ‘need’ human fetal tissue to generate the BLT (bone marrow, fetal liver, fetal thymus) humanized mouse model,” she continued, a reference to the research contract whose discovery in August reignited the controversy. “But in reality, similar stem cells can be obtained from ethical sources other than fetal liver, such as umbilical cord blood, bone marrow, and granulocyte colony-stimulating factor (G-CSF)-mobilized peripheral blood (MPB).”

“Furthermore, alternatives exist to the use of human fetal bones for generating humanized mouse models of multiple myeloma,” she added.

“It is clearly evident that numerous ethical alternatives exist and are available to researchers for studying some of the most complex diseases and disorders facing our nation today,” Sander Lee concluded, urging leaders to “stop using federal dollars to support aborted fetal tissue research and redirect funding to these ethical alternatives. If we continue to invest in fetal tissue research, this will delay future progress and advances using better and more ethical science.”

This fall, dozens of pro-life leaders confronted the Trump administration over nearly $100 million in tax dollars that continued to pay for research using tissue and organs from aborted babies. In response, the Department of Health and Human Services began holding listening sessions with scientists, ethicists, and pro-life groups on the research, and pledged to conduct an audit of the projects currently being funded.

Speaking to reporters Thursday, Francis Collins, the director of NIH, defended using tissue from aborted babies. He even went so far as to claim pro-lifers could find it justifiable.

“Even for somebody who is very supportive of the pro-life position, you can make a strong case for this being an ethical stance,” Collins said. “That if something can be done with these tissues that might save somebody’s life downstream, perhaps that’s a better choice than discarding them.”