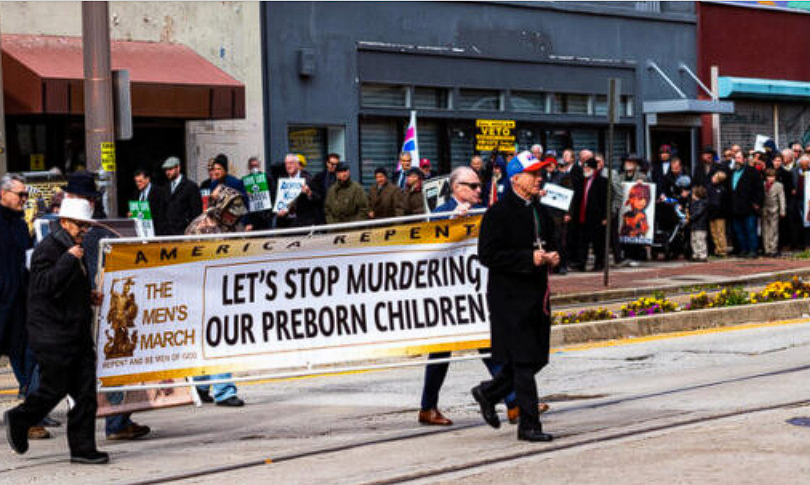 TALLAHASSEE, Florida (LifeSiteNews) – Men across the U.S. are being called upon to rise up in opposition to the evil of abortion and to march together for an end to the legalization of mass child slaughter through abortion.

The National Men’s March will take place in Tallahassee, Florida, on June 11, where men are being asked to make a three-mile march “of authentic love” from a local abortion center in the city to the Florida State Capitol, offering a firm and prayerful witness to the right to life.

Women, children, and men unable to complete the march are being asked to join the marchers later at the Capitol building as they arrive for a “rally for personhood,” featuring speakers including Men’s March co-founder Father Stephen Imbarrato and pro-life activists Pam Stenzel, Walter Hoye, and Terry Beatley, among others.

Organizers are asking men to gather at the North Florida Women’s Services building in Tallahassee at 12 p.m. to then begin the march at 12:30 p.m. in a procession “marked by prayer and sacrifice to raise awareness for the cause of life and for the urgent need to end abortion.”

The group will arrive at the state Capitol at around 2 p.m., joined by families and supporters for the rally.

In comments to LifeSiteNews, Men’s March co-founder Jim Havens explained the need for men to rise up and to lead the nation in the fight to end abortion.

“We have an ongoing, daily mass murder of children in our nation and world that is not being properly acknowledged and opposed. Children in the womb are no less human, and no less valuable, than any of us who are outside of the womb,” Havens stated.

“In fact, we who are older and more powerful have a grave responsibility to truly love and care for those who are younger, vulnerable, and in need of our protection” he continued, adding that the “vulnerable” includes “thousands of pregnant moms in need who are being exploited for profit every day by the lie of abortion.”

“We must be clear: there is never anything good about murdering an innocent child,” he stated.

Recognizing the grave need for a change in the law, “we are calling on all people of good will to face reality on this, take proper responsibility, repent of what he or she has done or has not done, and resolve to do more to push forward for the end of abortion, making child killing rightly illegal in law and unthinkable in culture.”

READ: Archbishop of Oklahoma City thanks governor for new abortion ban that ‘builds the culture of life’

For the June march, which will be the fourth national men’s march within the last year, the location of Florida was picked due to its current position as a “key state” in the pro-life movement, “and Republican Governor Ron DeSantis is perhaps the key figure, in seeing how far politicians elected on a pro-life platform are willing to go in protecting the rights of the preborn from conception,” Havens said.

A statement on the march website adds that part of the purpose of the march is to call on DeSantis “and all Republican leaders to lead on life … The need could not be more urgent. Constitutional personhood must be affirmed now.”

Last year, Imbarrato said, Florida executed around 80,000 babies in the womb in the state’s 55 “abortion mills,” making Florida “far and away the worst ‘red state’ in the entire country.”

Imbarrato stressed that if Roe is overturned, “we need to abolish abortion through constitutional personhood.”

In order to help a full-throated abortion ban to precipitate within the state, Imbarrato highlighted the importance of the march in Tallahassee “to send a message to DeSantis that there are no more excuses if you get re-elected [in November], there are no more excuses if Roe v. Wade is overturned; there has to be an abolition of abortion in Florida through personhood.”

Imbarrato noted that “people are coming from all over the country” to participate in the march: “It’s amazing. People are traveling, staying overnight, chartering busses. We are hoping for a very successful event” and urged everyone to pray and fast for the cause, regardless of their ability to attend the march.

The event’s co-founders told LifeSiteNews that the “National Men’s March to End Abortion and Rally for Personhood” on June 11 is “as grassroots as it gets,” asking that people might “spread the word” to family and friends.

Alongside prayers and fasting, financial donations can be made to help mitigate the costs associated with organizing and advertising the pro-life march. To make a donation, please visit ProtestChildKilling here and follow the links or send a check to their Florida address: