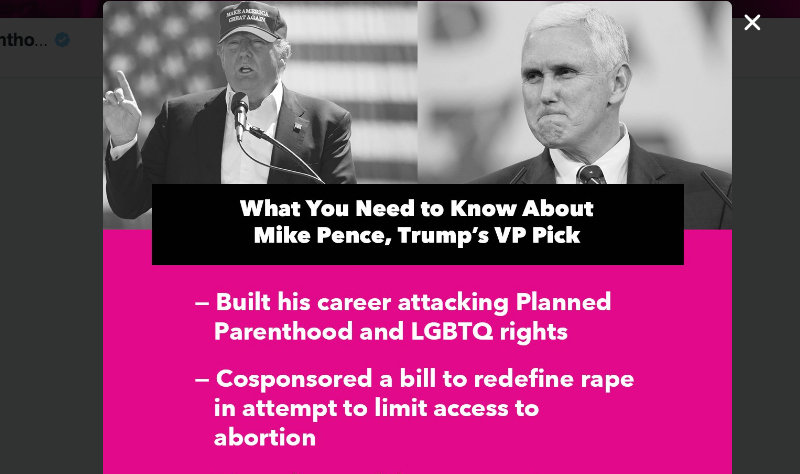 A screenshot of an image Tweeted out by Planned Parenthood immediately after Trump's announcement of Pence as his VP pick.

The group, which endorsed Hillary Clinton during the Democratic primaries, reassured supporters, that they “can make sure champions for reproductive health and rights like Hillary Clinton win not only this year, but in future elections. We can elect strong leaders in the White House and other offices, stop the attacks on our communities, and move our country forward.”

Any more questions about @realDonaldTrump's commitment to dragging this country back to the Stone Age?

EMILY's List, a national PAC dedicated to raising money for female candidates who support abortion-on-demand, also piled on Pence's pro-life record as beyond the pale.

“Pence has a rich history of marginalizing women as a politician, the same way Donald Trump has throughout his career and this campaign,” said Marcy Stech, an EMILY’s List spokeswoman, in a statement. “Together, they are a perfect storm of classic, out of touch, GOP extremism. For the very few women still not convinced that Trump isn’t a threat to women, Gov. Pence should do it – these men are not to be trusted.”

Hilary Clinton sent out a Tweet suggeting that by picking Pence Trump has exposed his commitment to following through with his “dangerous plan for America.”

If you had any doubts about Trump sticking with his dangerous plan for America, say hello to his VP pick. pic.twitter.com/xuFClfZeLi

Pro-life leaders meanwhile continue to praise the selection of Pence, a convicted pro-life leader known for his participation in a Bible study while on Capitol.

“With a solid pro-life voting record on abortion during his time in Congress, and through his pro-life actions as Indiana governor, Mike Pence has proven himself to be a strong leader for the right to life,” said Carol Tobias, president of the National Right to Life Committee. “Mike Pence brings a strong pro-life background to the Republican ticket, which contrasts with the extreme pro-abortion position of Hillary Clinton and the Democrats.”

Over several years in the House, Pence earned a 100 percent pro-life voting record, while scoring zero percent from NARAL.

“Mr. Trump’s selection of Gov. Mike Pence is an affirmation of the pro-life commitments he’s made and will rally the pro-life grassroots,” said Susan B. Anthony List President Marjorie Dannenfelser.

Matt Schapp, of the American Conservative Union, the organization that hosts CPAC, called Pence “an excellent pick to be the vice president. He is a proven leader who has worked with grassroots conservatives to advance policies and solutions that strengthen our economy, our national defense, and our families. His Reagan-esque approach, as a great communicator with the courage of his convictions, sends the signal to conservatives across America that Donald Trump is eager to bring Americans together to reject Hillary Clinton’s plans to continue President Obama’s radical agenda.”

After serving in the House of Representatives from 2001 to 2013, becoming head of the House Republican Conference, he succeeded Mitch Daniels as governor of Indiana.

Indiana Right to Life President Mike Fichter hailed Pence's record over the last four years. “The state abortion rate has been steadily declining every year,” he said. “The state is enforcing health regulations that protect women's health, and abortion doctors know they don't have a free pass.”

The commendations for Pence include one of his former colleagues, who is now a national pro-life leader.

“When I was in Congress it became apparent to me immediately that Mike Pence was committed to conservative principles,” said former U.S. Congresswoman Marilyn Musgrave, now vice president of government affairs at SBA List. “He was an incredible leader of the Republican Study Committee, making sure that Republican Leadership stayed true to our core values, including life. He had the courage and conviction that it took to be a true leader. His floor speeches were like those of great orators in our history.”

“But what I admired about Mike Pence most of all was his commitment to his faith, and Karen and his kids,” she said. “He kept his priorities right.”