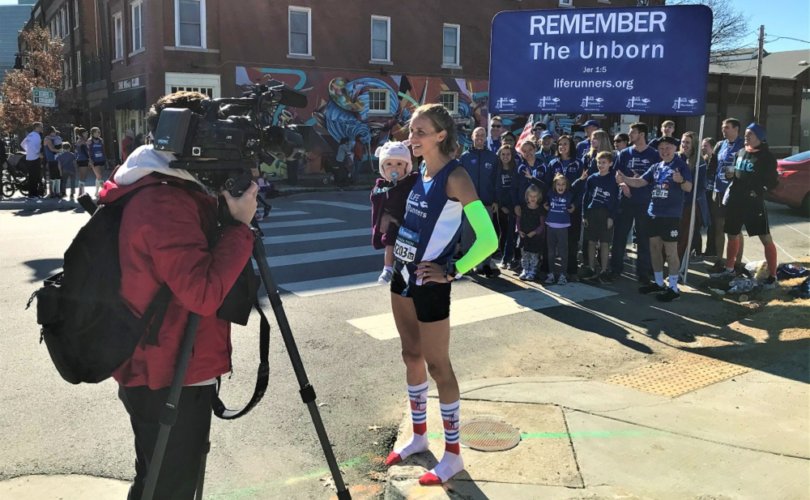 Julia Webb of LIFE Runners does a TV interview after beating the women's world record for half-marathon while pushing a stroller.LIFE Runners

TULSA, Oklahoma, December 5, 2019 (LifeSiteNews) — A pro-life mother accomplished a world record for fastest half-marathon while pushing her baby daughter in a stroller. This happened despite race officials’ objections to the pro-life messaging she and her teammates put forth during the race.

Julia Webb (36) won the Route 66 women’s half marathon in Tulsa on Sunday, setting a world record while she pushed her 10-month-old daughter, Gabriella, in a stroller. Wearing a t-shirt that proclaimed, “Remember the unborn,” she came in at 1:21:24, according to race organizers. The official results are pending ratification from the Guinness Book of Records.

Fox News reported that Julia said, “I have just felt called to run my whole life.” She added, “This is what I was made for. Especially as a mom of three kids, I need some me-time…everything that it entails, I just absolutely love it.” Saying that she enjoys competition, Julia said that decided to combine running and motherhood by running with her children in a stroller.”

In an interview with LifeSiteNews, she said that in 2016, she clocked a similar time, pushing her daughter Jonni is stroller, but did not have video evidence to prove it as required by Guinness.

Both Julia and her husband Alan Webb are active with LIFE Runners, the largest pro-life running group in the world. LIFE Runners has over 13,000 Christian runners in 39 countries all over the world who raise money and draw attention to the pro-life cause. During the summer, Julia trained with fellow LIFE Runners for the race on Sunday. “They were a big reason I was able to break the record this season,” she said. LIFE Runners founder Dr. Patrick Castle said in an interview with LifeSiteNews that running for the pro-life cause gave Julia the extra push she needed to accomplish her record run.

A pro-life advocate, Julia wore her blue LIFE Runners t-shirt bearing the words “Remember the unborn” as she ran to victory. She is currently preparing to run marathon trials this February in Atlanta in order to qualify for the next Olympic Games. LIFE Runner and husband Alan is an athlete,too, and famed for having set the unbeaten American record in the mile (3:46.91). Both Julia and Alan are devout Catholics.

The decision to join Life Runners was not easy. For most of my life I never wanted to stand up for anything. I wanted to be agreeable with everyone and everything, offending as little people as possible … 2016 my husband had a conversion and has challenged me on every level ever since.

I realized I was most of the time ashamed of Christ and His Church. I was embarrassed to be ‘out there’. Also I have always been Pro Life but I was terrified to take a public stand against abortion. I just wanted to be accepted and having approval feels good.

Respect to all beliefs but I feel called to be a witness to Christ. There are days I am dragging and want to hide behind a Nike logo but it’s time for me to be uncomfortable. Standing up for the littlest in society matters. Anyone else brave enough to join?

In a telephone interview with LifeSiteNews, Julia credited LIFE Runners at the Tulsa race for helping her achieve her record. “There was so much charity and love and support for families,” she said, on the part of LIFE Runners at the race. She said she arrived fatigued and somewhat dispirited to the race. But the enthusiasm and warmth of her teammates buoyed her energy level. Before the race, she felt that the Holy Spirit was at work in her, lending the confidence she needed to make the win.

Having joined LIFE Runners earlier this year has not been without a cost, she said in the interview. Pro-abortion acquaintances and fellow runners have criticized her for wearing the LIFE Runner t-shirt and have questioned her motivations.

Julia told Fox News that she wants to see LIFE Runners movement continue to grow, adding, “… if it can save one woman from getting an abortion it will be worth it.” In a separate statement, she wrote: “When I am competing for LIFE Runners it is for a cause much greater than myself and this is the extra I need to achieve big goals.”

In a statement, LIFE Runners founder Dr. Castle, a nano-analytical chemist and pro-life advocate, declared, “Julia set that world record in a LIFE Runners jersey supported by her 13,857 teammates in 39 nations.” He added that more than 100 fellow Christian LIFE Runners were on hand to cheer her on at Route 66 Marathon events.

In an email, Castle wrote that 35% of LIFE Runners in 50 chapters are age 22 and younger. For example, Baby Gabriella Webb wore a LIFE Runner onesie under her parka during the race.

In an extensive interview with LifeSiteNews, Dr. Castle said some race officials objected to LIFE Runners’ use of pro-life messaging on t-shirts, their team booth, and banners. He said Route 66 Marathon executive director Destiny Green told him on the sidelines of the race, “Stay in the confines of your booth.” Dr. Castle said Green gestured to a line in front of the team’s table as the boundary that should not be crossed. When he pointed out that the booths of other teams exceeded their assigned space, Green responded: “But you have an agenda.” He pointed out to her that other teams also had an agenda, which included pushing handicapped people in jogging carts to make them feel part of the race.

In another instance of apparent prejudice, Dr. Castle said a race official called on the LIFE Runners, “Lose the jackets!” in reference to the blue jackets that bear the team logo and messaging.

Other race officials also expressed objections to the LIFE Runners’ pro-life messaging. For example, a race director told Bishop Thomas Paprocki of Springfield, Illinois to remove the LIFE Runners’ “political banner from the start area.” Paprocki refused, telling the official: “We have a First Amendment right to be here with this message.” The race official retorted, “I don’t care if you are a bishop!” Dr. Castle, who was also on hand, responded that they would move only if asked by the local police. No police subsequently asked for the removal of the messaging.

Bishop Paprocki ran a half-marathon on Sunday. Forthrightly pro-life, Paprocki issued a statement earlier this year telling Catholic politicians who have affirmed pro-abortion legislation that they should not present themselves for Holy Communion.

Undaunted by opposition, LIFE Runners are planning to participate in the November 6–7, 2020 marathon and half-marathon in Indianapolis, in addition to their annual relay run that crisscrosses the country.