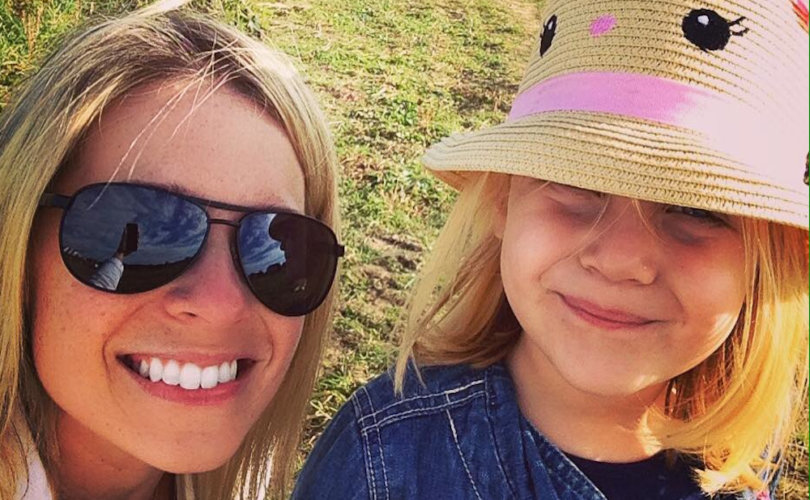 WILLIAMSTOWN, New Jersey, April 20, 2017 (LifeSiteNews) – A young mother is being mourned and celebrated by family for choosing to give up her life in order to deliver her unborn child prematurely by C-Section.

Danielle Janofsky died three days after the baby was born at age 30. He continues to fight for life in a Pennsylvania hospital.

“She was a phenomenal mom.” her mother, Barbara Jackson, told LifeSiteNews.

Janofsky died in February from cancer that appeared in rapidly spreading form during the sixth month of her second pregnancy. Rejecting the chance of survival until a second treatment of immunotherapy drugs could begin, she delivered him on February 14.

“She was not expecting to wake up,” Jackson told LifeSite.”She was surprised when she did.”

Conscious but numbed by painkillers, she held her son and knew him, her husband, Max, reported. Three days after the birth, she died in her husband’s arms.

Jake weighed only one pound and 11 ounces at birth. Now in the neonatal intensive care unit at the University of Pennsylvania, he is being treated for chronic lung disease and is on a ventilator. His father’s insurance covers basic expenses but not his special diet of mothers’ breast milk, which reduces his chance of digestive problems.

“She made the selfless and loving decision to deliver baby Jake on Friday, February 24th thereby sacrificing herself so that her son could live,” stats the entry made on the GoFundMe page set up by family and friends to help Max Janovsky with medical and parenting expenses for Jake and big sister Avery, 4.

Max, a K9 officer with the local police force and a veteran who served in Afghanistan and Iraq, “was by her side every minute helping to ease her pain and remind her of how much love surrounds her and her family,” continues the same entry. So far, $82,000 has been raised..

“My dearest Danielle was an amazing person. Smart. Witty. Loving. She died yesterday, held in her loving husband’s arms when she slipped away. I will miss her calling me up saying Hi Mommy in a voice that always reminded me of that long ago little girl. If love could have saved her, she would have lived a hundred years.

I will miss you forever my Dani.”

Jackson said that after her daughter had her first child, a daughter, she found she loved being a mother. “She was wholly smitten with it.”

Her husband called her a natural at motherhood. “You know how people have hobbies? Hers was being a wife and a mother,” he told NJ.com. “It's what she loved to do.”

She worked for a local law firm not because the family needed the money but to put aside funds for her children’s education. Now the GoFundMe page is doing that.

“She could walk into a room and not know anyone and leave with a room full of new friends,” said Janofsky.

Her mother agreed. “Everywhere she went she made friends and she kept them. Her best friend was her best friend in kindergarten.”

Danielle had been treated for a cancerous mole several years earlier and maintained regular checkups. But at her February 6 visit, when she complained of abdominal pains, tests revealed the cancer had returned and spread to her vital organs.

Only aggressive immunotherapy might save her. More likely, she would die in the interval between treatments. But rather than wait, she elected to shorten her remaining days by delivering her tiny unborn child by Caesarian section, knowing she had only a 10 percent chance of living through it and very little, if any, of surviving long enough for the next course of immunotherapy.

The GoFundMe page concludes, “We appreciate you taking the time to read this description of a bright life that ended too soon and hope that you will carry the love Dani had for her family, especially her children, with you as an inspiration to live every day fully and love everyone fiercely.”