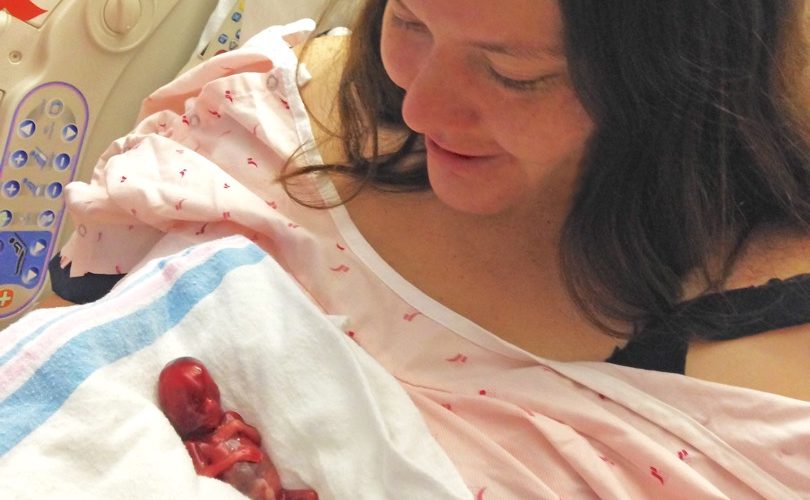 DALTON, Nebraska, January 20, 2016 (LifeSiteNews) — Jessica Smith had always thought of herself as a seasoned pro-lifer. But the 29-year-old married mother was totally unprepared for the shock she was to receive after miscarrying her 5th child at 13 weeks and being asked by the doctor if she wanted to see and hold the remains.

“I expected to be handed a blob that early into pregnancy. But instead, I was handed a perfectly formed tiny baby,” she told LifeSiteNews in an exclusive interview.

It was in April that Jessica and her husband Ray learned that they were expecting again. They excitedly began making plans to accommodate the new member of the family. They would now have to buy that large van that they had been putting off for as long as possible.

But in the middle of July, Jessica started bleeding. She hoped this was not going to be her second miscarriage.

“I woke up with an immense amount of pain. There was just a pool of blood around me in the bed. I knew it probably wasn't a good sign,” she said.

Since her husband Ray was spending the night near his job about an hour away, Jessica’s mom came over to drive her to the hospital. The couple’s eldest was dropped off at a friend’s house, while the two youngest accompanied their mom and grandmother to the hospital.

“They took me into an ultrasound room where they checked for the baby. I just saw that black empty screen, and I knew what that must mean. I was under the impression at that point that I had probably bled my baby out already. I just thought that I hadn't noticed him, that he had gone into the toilet, or something like that. It just kind of broke my heart to think about that,” she said.

When the doctor told Jessica that they needed to deliver the baby, she at first did not understand what was meant.

“The doctor explained that the baby was caught in the middle and was not all the way out,” she said.

Remaining at the ultrasound station, the doctor helped Jessica deliver the baby.

Jessica said that, even in the midst of her sorrow, her tiny baby was simply a marvel to behold. He had perfectly formed fingers and toes. He had tiny completely identifiable ears, nose, and mouth. At this stage, his liver and kidneys would have been fully functioning. His bodily systems would have been completely formed, only needing time within the safety of his mother’s womb to develop until reaching self-sufficiency.

“I wasn't expecting to see a baby like that. I always follow my pregnancies with those little baby apps, but even they did not do justice to how perfectly human my son looked. I've always been pro-life, but even I was fooled as to what a 13-week old fetus would look like,” she said.

Friends who later saw pictures of the baby even said, “Oh my gosh, he looks just like a Smith kid,” related Jessica.

By this time, Ray had made it to Jessica’s side. They named the baby Noah Israel, meaning “rest easy, God's helper.”

The two youngest children were then invited into the room to say ‘hello’ and ‘farewell’ to their little brother.

“When my two-year-old Maycee saw baby Noah lying there, she didn't say, ‘Oh Mommy, there's a blob of tissue.’ No, she said, ‘Look Mommy, there is a baby,’” Jessica said.

The entire family grieved the passing of Noah. If he had made it safely through the pregnancy, he would have been born one week ago, on January 13.  Despite his short life, Jessica believes that Noah’s life was not in vain, but has meaning and purpose.

“When you look at Noah and see how perfectly human he was, how can anyone ever call abortion a good decision? It’s time to remove the veil and pull down the curtains so that people can see the humanity of a young baby in the womb and how abortion destroys a real human life.”

“Noah showed me just how ‘human’ these little ones really are,” she said.

ARTICLE: ‘She was alive and crying!’: Abortion nurse quits after baby born alive, left to die