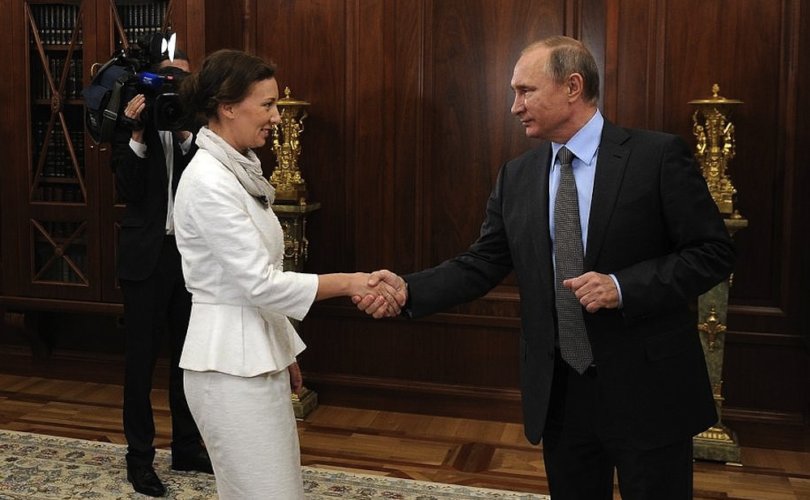 MOSCOW, Russia, September 23, 2016 (LifeSiteNews) — Russian President Vladimir Putin has appointed a pro-life activist, mother of six, and wife of a Christian priest as the head of the Russian Commission for the Protection of the Family and Children's Rights.

Kuznetsova previously led the Pokrov Fund for the support of family, motherhood, and childhood in central Russia, and also had served in other pro-marriage and family posts.

An outspoken opponent of abortion, Kuznetsova enumerated the dangers of abortion in a much-publicized 2009 interview. Trained as a psychologist, she has also worked as a pro-life counselor. She favors a complete ban on abortion throughout the country. Her husband, the Orthodox priest Fr. Aleksei, is an outspoken public advocate of abstinence before marriage.

“Pokrov” in Slavonic refers to the prayers of Mary, the Mother of Jesus, who Russian Orthodox Christians profess as the “Theotokos” or mother of God, because they believe Jesus is nothing less than fully divine.

The president of the American Orthodox Institute, Fr. Johannes Jacobse, characterized Kuznetsova's appointment as promising. “They see the need to strengthen the traditional family structures,” Jacobse told LifeSiteNews. “Elevating the importance and safety of children, which begins by battling ideologies that justifying their destruction in the womb, is a good and necessary place to begin.”

“This challenges the prevailing idea that the value of creating a family rises no higher than personal fulfillment and thereby contributes to the decline of nations and civilizations,” Jacobse added. “Russia clearly has decided it will not go the way of Sweden and other European nations.”

“Most European nations are in a kind of death spiral, where the population is declining and nations may even disappear,” Jacobse explained. “The replacement rate is so low in Sweden, for example, that in 20 years non-Swedes will dominate the population and the historical Sweden will no longer exist. Russia is taking declining birth rates seriously.”

After her appointment was announced, Kuznetsova told the Russian News Agency TASS, “It is very difficult to transition from a public activist into a civil servant, but I think that all the options have been looked into.”

The previous ombudsman, lawyer Pavel Astakhov, said on Instagram that Kuznetsova “is a very worthy person and a very wise choice by the president.” Astakhov resigned under pressure after making several public verbal missteps, including negative comments about women's looks as they grow older, and trying to cheer up campers with an insensitive joke after 14 children drowned during a camping trip.

Astakhov also drew public ire when he defended a police official marrying a girl a third of his age, and stated a 13-year-old girl who was mauled by a tiger engaged in “stupidity and hooliganism” when she snuck into the zoo after hours.

Kuznetsova has come under criticism from stay-at-home mothers, who consider it ironic that a demanding national position to protect traditional families and children is given to a mother of six young children. One commented, “Such a position should be occupied by a man.”

Kuznetsova has also been criticized for her belief in Telegony, which is the theory that a woman's multiple sexual partners can physically and emotionally influence a child born later.  In a seven-year-old video, she states, “If a woman has several partners, there is a significant chance of a baby being born weakened due to the mixing of information. This fact has an especially strong influence on the morals of a future child.”

Today, Kuznetsova dismisses the old interview and the theory that children are physically and emotionally impacted by their mother’s previous sexual partners.