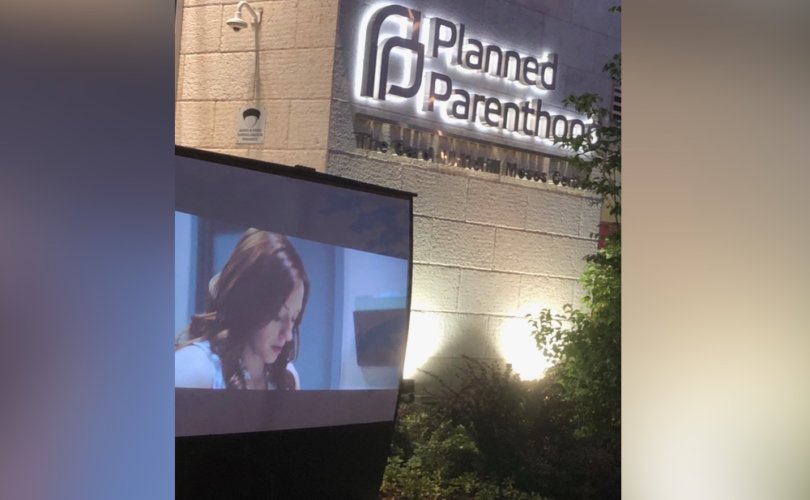 “This is what the revolution looks like!” said Rev. Pat Mahoney, Director of the Christian Defense Coalition and the driving force behind the effort. “Showing the powerful pro-life film, ‘Unplanned,’ at the front door of the Planned Parenthood mega abortion center in Washington DC!”

“Let’s work to end the violence of abortion,” he added.

“Yesterday, UnPlanned opened a window into the largest abortion provider in the nation by screening directly in front of Planned Parenthood in the US capital,” the movie’s official twitter account announced.

Yesterday, #UnPlanned opened a window into the largest abortion provider in the nation by screening directly in front of #PP in the US capital. One way @revmahoney & @AbbyJohnson are changing everything.
Where would you #pullbackthecurtain? pic.twitter.com/DlFepSeRPn

“Showing, ‘Unplanned’ at the front door of Planned Parenthood is a powerful reminder that our pro life witness must be lived out in the public square!” said Mahoney in another tweet.

Showing, “Unplanned” at the front door of Planned Parenthood is a powerful reminder that our pro life witness must be lived out in the public square! #ProLife ⁦@AbbyJohnson⁩ ⁦@LiveAction⁩ ⁦@StudentsforLife⁩ ⁦@March_for_Life⁩ ⁦@SBAList⁩ pic.twitter.com/iCIhEv51cz

The movie tells the story of how Johnson – who directed a Planned Parenthood facility in Texas – became pro-life after witnessing an ultrasound-guided abortion and recognizing the humanity of the preborn baby.

“‘Unplanned’ is a powerful film sharing the personal story of Abby Johnson and revealing the true mission and operation of Planned Parenthood as well as exposing the violence of abortion,” said Rev. Mahoney in a statement released before the showing.

“Showing ‘Unplanned’ in front of a Planned Parenthood abortion center is a powerful witness to the dignity of every life and the example we all must follow to protect human rights and end violence in our society,” continued Mahoney. “The film also exposes why Dr. Wen was fired as she revealed Planned Parenthood has ‘doubled down’ on abortion and neglected true health care for women.”

“Our hope is to launch a nationwide campaign to eventually show 'Unplanned' in front of Planned Parenthood abortion centers across America,” he added.

Johnson echoed Mahoney, encouraging activists around the country to follow Mahoney’s lead and screen the movie in front of every big Planned Parenthood facility in the nation.

We should do this at all their big facilities.

Planned Parenthood … on the scrap heap of history

After the movie was over, Rev. Mahoney led those gathered in prayer.

“We pray, O God, that this Planned Parenthood will close down,” said Mahoney, “that this building will be turned into an emergency shelter, a place to teach literacy and job training to needy people.”

“God, we cry out, that Planned Parenthood will end up on the scrap heap of history,” he continued, “like segregation and slavery.”

Just as they did at the end of the film “Unplanned,” here we are praying for the closing of the Wash DC Planned Parenthood after showing the movie there. #Prolife ⁦@AbbyJohnson⁩ ⁦@UnplannedMovie⁩ ⁦@SBAList⁩ ⁦@StudentsforLife⁩ ⁦@March_for_Life⁩ pic.twitter.com/fWQyaMYQOW

Mahoney thanked the Washington, D.C. Police Department, “for honoring the First Amendment and free expression in granting the permit,” to publicly show the film, “right in front of a Planned Parenthood abortion clinic.”

“This comes after Unplanned has been censored and discriminated against by social media giants, television networks and other outlets,” he said.

“It is critical for Americans to know that free speech and public expression are honored and protected in our nation's capital with all viewpoints being allowed,” he added.