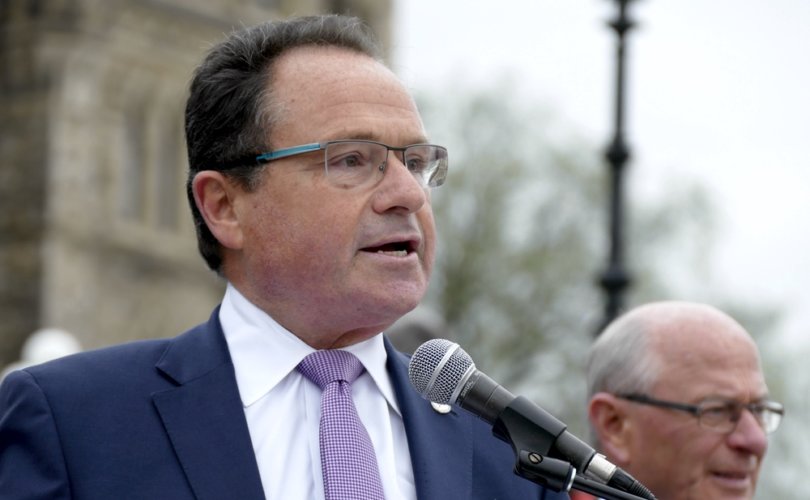 OTTAWA, May 10, 2018 (LifeSiteNews) — Canada must extend legal protection to the child in the womb, Conservative Member of Parliament Harold Albrecht told participants at the March for Life in Ottawa today to a great cheer.

“Governments are judged by how they treat their most vulnerable,” said the four-term MP for Kitchener-Conestoga, Ontario.

“There is no question in my mind that the most vulnerable among us are those living in their first nine months as preborn children. They have no method of self-defence, no voice to cry out in pain or in protest, yet we have destroyed almost 100,000 of them each and every year in Canada over the last many, many years,” Albrecht said.

“If we are to be a just and compassionate society then human rights must be extended to these small members of our human family.”

Albrecht pointed out Canada is a signatory of the United Nations Convention of the Rights of the Child.

That document states the child, “by reason of its physical and mental immaturity needs special safeguards and care including appropriate legal protection before as well as after birth,” he said.

“Yet today in 2018, Canadian law gives no protection before birth,” Albrecht added.

“It is time for Canada to, at the very least, come in line with every other democracy in the world and extend legal protection to preborn children,” he said, evoking a cheer from the crowd of thousands on the west lawn of Parliament Hill.

The law was struck down in 1988 by the Supreme Court, leaving Canada with no restrictions on abortion.

“We are all here for one reason. About 300 pre-born babies are killed by abortion every day here in Canada, and that is why we march,” Albrecht told the crowd.

“That is why we do what we do what we can to stop the killing. We march, we vote, we write letters, we demonstrate, and we offer support to those women in crisis. We are PRO-LIFE: ALL.IN,” he said, invoking the theme of this year’s March.

Albrecht thanked March participants “for standing up to be counted regardless of the cost,” and urged them to continue to take action.

“Elect pro-life MPs, call your MPs and tell them to stand up for human rights for the most vulnerable,” he said.

“We cannot be silent when human dignity and human rights are under attack. We need to rise up in protest against it. This is not a partisan political matter, it is a matter of life and death,” Albrecht stressed.

“The ongoing loss of human dignity brought about by the destruction of innocent human life is a cost which continues to mount. We are all diminished when we stand by and do nothing.”

The sole MP to speak at the rally, Albrecht explained many of his colleagues were attending the funeral of Conservative MP Gord Brown, who died suddenly of a heart attack in his Hill office on May 2 at age 57.

He asked participants to pray for Brown’s wife Claudine and their two children in the coming weeks.

Conservative Senators Percy Mockler of New Brunswick and Norm Doyle of Newfoundland, as well as Christian Heritage Party leader Rod Taylor and Halton Catholic School Board Trustee Helena Karabela were also among the politicians present for the march.